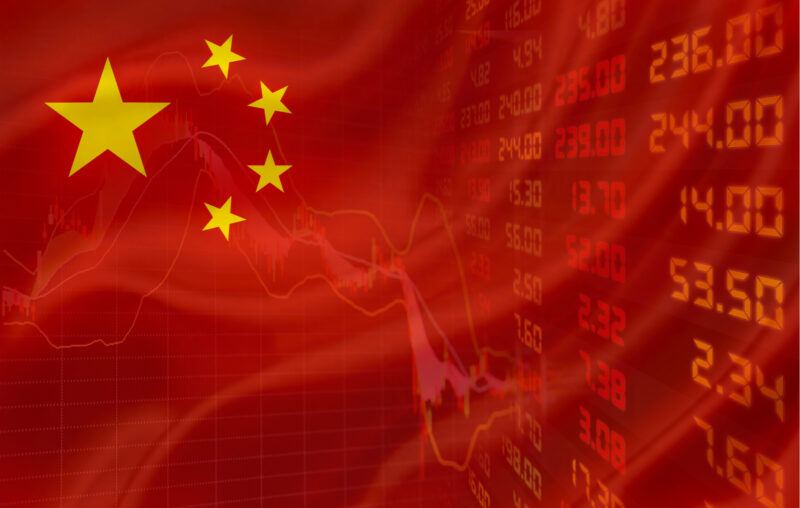 Virtually the entire Chinese economy, especially sectors with heavy investment inflows such as technology, social media, and private education, is in a state of flux. Foreign investors are pulling their positions, Chinese CEOs are under strict scrutiny, and stocks are in a free fall as Chinese regulators continue to unleash a regulatory tide fueled by both politics, as well as a genuine desire to alter the economy. CNBC reported on July 25, 2021, that,

At the time of this writing (7/30/2021), Chinese stocks continue to fall with Alibaba, China’s equivalent to Amazon, down 4.35 percent over the last five days. The turmoil is likely to continue as hysteria over the stock selloff mounts amidst real concerns regarding further regulation alongside speculative rumors. Yahoo Finance notes,

“A deepening selloff in Chinese stocks spread to the bond and currency markets on Tuesday as unverified rumors swirled that U.S. funds are offloading China and Hong Kong assets.”

The rumors were inspired by speculation of a potential US investment restriction on China and Hong Kong alongside broader selloffs from investors across Asia who are weary of the CCP’s regulatory onslaught. Based on the ferocity of new regulation, which has recently targeted private education alongside previous victims such as big tech, the trend seems to be exacerbating, not relenting.

The main areas that have been targeted by Chinese regulators are tech companies, most famously Alibaba, Didi, a ride-hailing app, Ant Group, a fin-tech company, and Meituan, a food delivery service. Meituan’s stock, in particular, fell over 21 percent in the last five days as regulators issued a sudden change to its worker compensation requirements. Other big names like Tencent and WeChat were also hit with heavy regulation, with the former having to scrap its most recent acquisition and the latter having to update its security platform. Ant Group notably had its IPO canceled suddenly before its listed date and drastically overhauled beyond recognition after Chinese billionaire Jack Ma criticized the state banking system.

Quartz reported that this highly intimate, sudden, and aggressive onslaught has recently expanded into the private education sector, to which the after-school tutoring industry alone has been valued at over $100 billion. Education companies in China have been a hot investment opportunity recently, attracting billions in foreign capital, which was listed as a core concern by the CCP, stating that they had been “hijacked by capital”. They have subsequently been hit with onerous restrictions on foreign investment and are even banned from teaching on certain days. The Chinese department of education even announced an initiative to provide free public services in direct competition, further jeopardizing the private education sector.

The official reason for this regulatory maelstrom has mostly been justified on antitrust grounds. Chinese regulators allege that these large companies, which already have a close link to the state, are engaging in anticompetitive practices and exacerbating inequality. China’s economy is relatively unfree, which may explain why large national champions like Alibaba possess so much market power whereas smaller companies find it difficult to compete. The Chinese government since 1978 has increasingly liberalized its economy, leading to much of the progress seen today. However, in recent years, especially under the current president Xi Jinping, this trend has sharply reversed as the CCP tightens its control over Chinese society.

The vast issuance of antitrust regulation and other intrusive policies is likely aimed at encouraging some semblance of competitive activity while also reminding its rich CEOs that the CCP is still in charge.

Bloomberg cites a number of Chinese economic experts who assert that the recent regulatory campaign is a new model of competition pioneered by the CCP. Originally the CCP attempted to copy the US model of laissez-faire growth, allowing innovation and growth to happen naturally while embracing large companies. Its new model is one of aggressive antitrust and state management to promote competition.

This will likely drastically undermine the Chinese economy and its ability to solicit consistent investment. In fact, Friedrich Hayek won a Nobel Prize for explaining why this sort of central planning is doomed to fail.

The Chinese seem to have historically understood sound economic theory and have always been willing to sacrifice growth for control, which appears to be the underlying motive in this case. Xi Jinping, in particular, has radically centralized power around the CCP in recent years, not only aligning the rule of law towards the objectives of the party but calling for greater private sector loyalty. Yahoo Finance writes,

“Beijing attempts to rein in private enterprises it blames for exacerbating inequality, increasing financial risk and challenging the government’s authority. Policy makers’ seeming acceptance of short-term pain for stockholders in pursuit of China’s longer-term socialist goals has been a rude awakening for investors.”

Chinese regulators have subsequently gone after companies like Didi and Alibaba for having offshore accounts in the Cayman Islands to better attract Western investment and even for opening up a tech plant in California. All this seems to signal insecurity with foreign interaction and a greater desire to show that it is in control of its CEOs. This is likely in reaction to witnessing Jack Ma’s criticism of the Chinese financial system.

This also follows the general trend of increasing authoritarianism in China, both economic and social, which may be in reaction to chronic issues in its political economy. This includes a declining birth rate, slowing economic growth, increasing political instability, and a potentially crippling debt crisis fueled by years of loose credit pumped out by state banks. Such a sudden and sharp power grab seems to signal insecurities and anxieties amongst the CCP, which will likely continue into the future. Although the aggressive and arbitrary antitrust regulations may produce some good results given China’s low economic freedom, in the long run, sustained growth will not be possible unless such behavior stops. However, it is clear that Xi Jinping has indicated that he is not as concerned with increasing economic growth as he is with securing political control.

The ongoing market turmoil in China can mainly be attributed to a radical departure from a more open economy towards a more centrally planned model. Its regulatory onslaught has been nothing short of brutal as it targets its longtime champions with antitrust probes and issues highly intimate regulation that have led to a multibillion-dollar exodus of capital investments. This crackdown also seems to follow in the footsteps of classic authoritarian behavior as anxiety over political control increases. In this case, Beijing seems to be making a calculated decision to pursue immediate political goals over long-term growth. Such trends are likely to continue and will make investing in Chinese companies increasingly unattractive.

This article, Understanding China’s Financial Market Chaos, was originally published by the American Institute for Economic Research and appears here with permission. Please support their efforts.