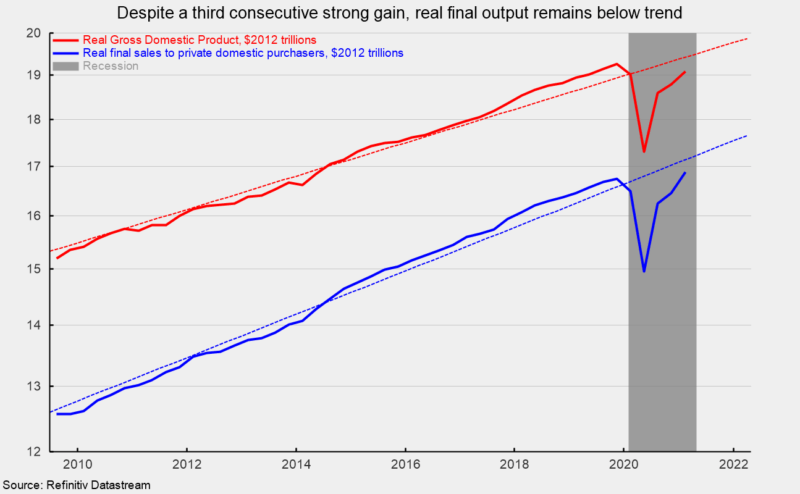 Real gross domestic product increased at a 6.4 percent annualized rate in the first quarter, up from a 4.3 percent pace in the fourth quarter. Over the past four quarters, real gross domestic product is up 0.4 percent, but the level is still 1.5 percent below the pre-pandemic trend and 0.9 percent below the fourth quarter 2019 peak (see first chart).

Real final sales to private domestic purchasers, a key measure of private domestic demand, rose at a very robust 10.6 percent annualized rate in the first quarter, versus a 5.5 percent pace in the fourth quarter. The rebound still leaves this important measure 1.2 percent below trend but at a record high, eclipsing the previous peak in the fourth quarter of 2019 (see first chart).

Gains were widespread across the different areas of the economy. Real consumer spending rose sharply in the first quarter, increasing at a 10.7 percent pace compared to a 2.3 percent rate in the fourth quarter. The gain was the result of rises in spending on durable-goods (up 14.4 percent) nondurable-goods (14.4 percent), and services (4.6 percent, see second chart). Business fixed investment increased at a 9.9 percent annualized rate in the first quarter of 2021. That gain was led by a 16.7 percent jump in spending on equipment and a 10.1 percent gain in intellectual-property investment. Those gains were partially offset by a decline in spending on business structures where spending fell at a 4.8 percent rate (see second chart), the sixth consecutive decline in a row.

Residential investment, or housing, rose at a 10.8 percent annual rate in the first quarter compared to a 36.6 annualized gain in the prior quarter. Housing has shown resilience throughout the pandemic as extremely low interest rates combined with widespread remote working policies and the desire by some people to move away from virus epicenters has supported increased demand.

Businesses liquidated inventory at a $85.5 billion annual rate (in real terms) in the first quarter versus accumulation at a $62.1 billion rate in the fourth quarter, subtracting 2.64 percentage points from first-quarter growth after adding 1.37 percentage points in the prior quarter.

Consumer price measures also showed a rise in the first quarter. The personal-consumption price index rose at a 3.5 percent annualized rate, up from a 1.5 percent pace in the fourth quarter. From a year ago, the index is up 1.7 percent, still below the Federal Reserve’s 2 percent target. Excluding the volatile food and energy categories, the core PCE (personal consumption expenditures) index rose at a 2.3 percent pace versus a 1.3 percent increase in the fourth quarter. From a year ago, the core PCE index is up 1.5 percent and has been at or below 2 percent since 2012. While there is significant concern being expressed about the potential for a sustained surge in consumer price increases, there are still major distortions in prices and the financial system resulting from government policies, disruptions to supply chains, and changes to consumer spending habits. Since many of these distortions are likely to be temporary, it is too early to draw any reasonable conclusions about the potential for a 1970s-style resurgence in persistent consumer price increases.

The U.S. economy suffered a historic contraction in 2020 as government shutdowns intended to fight the Covid-19 outbreak sent economic activity plunging and unemployment soaring. Reopening has spurred a historic rebound, but some areas of the economy remain below pre-pandemic levels. Still, the preponderance of evidence suggests the economy is on a clear and sustainable upward path. Continued progress towards herd immunity and a cessation of restrictive government policies will support a return to pre-pandemic levels of activity.

This article, U.S. Economy Posts Widespread Gains in the First Quarter, was originally published by the American Institute for Economic Research and appears here with permission. Please support their efforts.