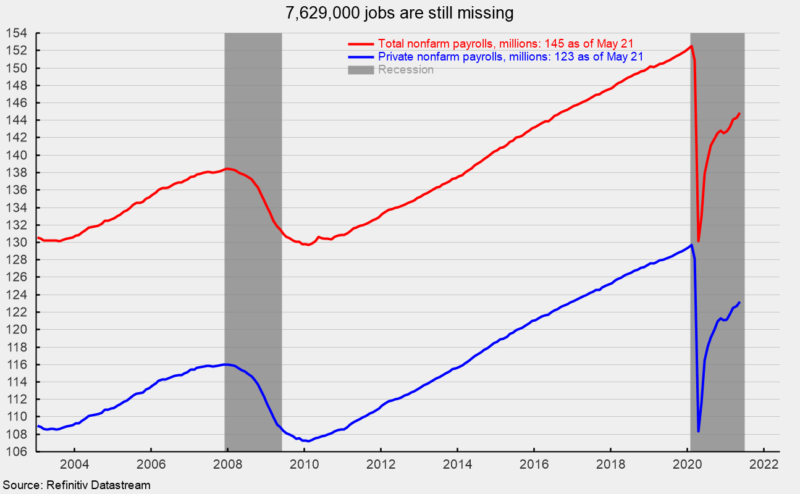 Despite the ongoing recovery, every private industry group still has fewer employees than before the government lockdowns. Leisure and hospitality leads with a loss of 1.756 million jobs followed by health care, down 628,500, and professional and business services with a drop of 557,000 (see third chart).

The average workweek was unchanged at 34.9 hours. Combining payrolls with hourly earnings and hours worked, the index of aggregate weekly payrolls gained 0.9 percent in May. The index is up 13.2 percent from a year ago.

The May jobs report shows a solid gain in private payrolls, though the gain was largely attributable to the leisure and hospitality industry. Despite the fifth consecutive monthly gain, the labor market remains well below conditions from before the pandemic.

Other measures of economic activity generally suggest the economic recovery from the government lockdowns in 2020 is gaining momentum as the restrictions on consumers and businesses are lifted. However, the damage done by the lockdowns was severe. Not only is employment still below pre-pandemic levels, but fallout from financial burdens on small businesses that were shuttered, personal and business bankruptcies and/or increased debt burdens, and unraveling the moratoriums on evictions may still restrain future growth. Furthermore, the inability of supply to recover as quickly as demand is resulting in shortages in some areas of the economy and resulting in significant upward pressure on prices. The overall outlook is tilted to the upside, but fallout from the lockdowns linger.

This article, U.S. Economy Adds 559,000 Jobs in May, was originally published by the American Institute for Economic Research and appears here with permission. Please support their efforts.