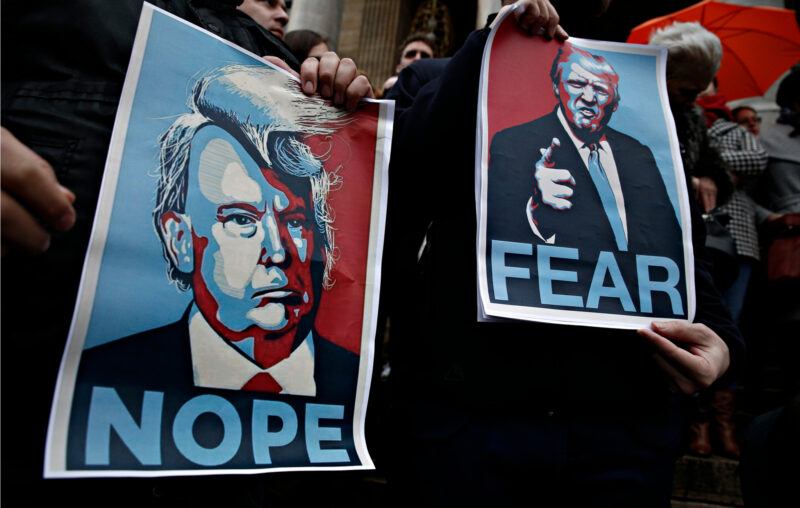 I continue to be at a loss to explain the support of so many people for – and the silence of so many other people in the face of – Covidocratic tyranny. When at a loss to explain, one naturally experiments with possibilities. Here’s one possibility for the U.S. experience: Some of the people who support Covid restrictions, or who see in them nothing ominous, are blinded by a fear greater than their fear of Covid-19. This greater fear is that of being thought by others, and by themselves, to be insufficiently hostile to Donald Trump and Trumpism.

Because state governments that imposed only relatively light Covid restrictions were more likely to be red than blue, and because the mainstream narrative from early on cast Trump with the anti-lockdowners, many people with antipathy to Trump apparently concluded that lockdowns and other Covid restrictions are acceptable for the simple reason that these measures are opposed by Trump and his base. The thinking seems to have been this: To be pro-Trump is to be anti-science, therefore, to be anti-Trump is to be pro-science. And to be pro-science specifically is to be pro-Fauci, Birx, CNN, and the New York Times, because these persons and media are anti-Trump. People reached this conclusion without much investigation of the realities of Covid restrictions, or of Trump’s actual role in affecting a response.

Careful investigation of the governments’ responses reveals that these were, and remain, dangerously disproportionate to the dangers posed by Covid. As for Trump, he played a key role in implementing lockdowns. Reviewing Scott Atlas’s new book, A Plague Upon Our House: My Fight at the Trump White House to Stop COVID from Destroying America, John Tierney writes:

But Atlas lays the ultimate blame for the lockdowns – “a crime against humanity” – on Trump himself, because he allowed [Dr. Deborah] Birx and her allies to remain in charge. “This president, widely known for his signature ‘You’re fired!’ declaration, was misled by his closest political intimates,” Atlas writes. “All for fear of what was inevitable anyway – skewering from an already hostile media.”

No matter. It seems that starting in Spring 2020 hordes of people, many of whom would otherwise have protested the horrifying expansion of government powers and the tasering of civilization, either vocally or silently supported Covid restrictions, convinced that these restrictions were wise and justified, or at least tolerable, because these were thought to be opposed by Trump and his base.

Whatever were (and are) the dangers to civilization posed by Trump and his supporters, these dangers are less extreme than are the dangers posed to civilization by supporters of lockdowns, vaccine mandates, and many other Covid restrictions. Covidocratic tyranny is no more justified by science than are any of the wrongheaded notions peddled by Trumpians, yet the consequences of Covidocratic tyranny are far more ominous than are the likely consequences of any policies that can reasonably be supposed to come to pass from Trump & Co.

On the science front, one of the differences between supporters of Covidocratic rule and Trumpians is that the former have stronger footholds in institutions traditionally associated with science and a more virulent will to control, or even to “recreate,” society with social-engineering schemes. Much progressive talk today of ‘transforming’ society into a safe, equitable, and inclusive heaven on earth is as detached from reality as are many Trumpian follies, but even more threatening. Yet because progressives, unlike Trumpians, are presumed by the intelligentsia to be well-intentioned, highly informed, and objective – and because social-engineering schemes conform with sacred superstitions – progressives’ policy demands are widely perceived as appropriate. These sacred superstitions hold that society is either inert or destructively chaotic to the extent that ordinary men, women, and children aren’t coercively prescribed and proscribed in fine detail by the progressive state. Opposition to these anti-liberal demands is regarded by progressive intellectuals as anti-progress, anti-science, and, of course, anti-intellectual.

Starting even before Trump’s presidency, readers of my blog, Café Hayek, found harsh criticisms of Trump, especially on the two policy issues about which he seems to care the most: trade and immigration. Trump’s demeanor is appalling, his ignorance formidable, his megalomania insufferable, and his venality vast. And because, as Scott Atlas reports, Trump foolishly acquiesced to Fauci and Birx’s “crime against humanity,” Trump bears much of the blame for America’s overreaction to Covid.

Yet as much as I fear Trump and the nationalist-right’s assault on liberal values, I now fear even more the rising authoritarianism in response to Covid. The fact that most supporters of today’s Covid authoritarianism are also opponents of Trump does not render this authoritarianism acceptable. Today’s situation is all the more dangerous precisely because those now running the show, compared to Trump (who, let’s not forget, is no longer in power), seem to many people to be well-intentioned and guided by “the science.”

Observing the expansion over the past two years of the biosecurity state, I detect enormous evil in what the vanguard of progressives incessantly works to do to liberal civilization.

This article, Trump, Covid, and Despotism, was originally published by the American Institute for Economic Research and appears here with permission. Please support their efforts.