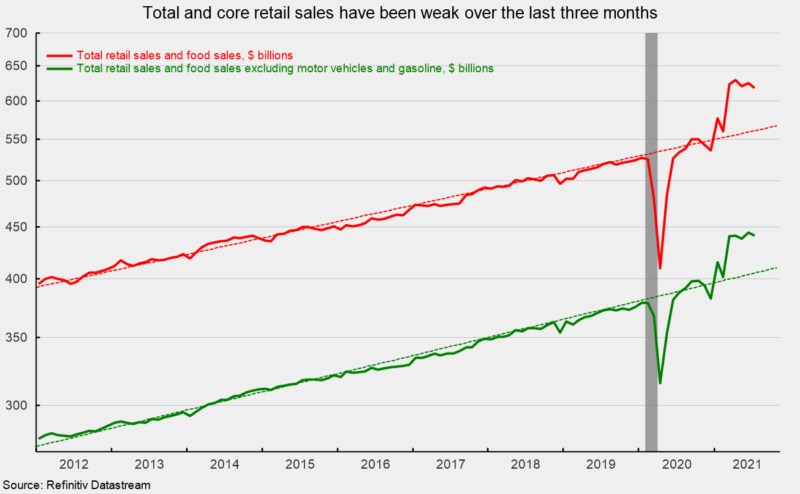 Retail sales and food-services spending fell 1.1 percent in July, the second drop in the last three months.  The three-month annualized growth rate is -6.8 percent though the level of sales is still well above the most recent nine-year trend (see first chart). From a year ago, total retail sales are up 15.8 percent.

Core retail sales, which exclude motor vehicle dealers and gasoline retailers, posted a 0.7 percent decline for the month, leaving that measure with a -0.1 percent annualized growth rate but a 13.8 percent gain from a year ago. Core retail sales are still well above the nine-year trend (see first chart).

Most categories were down in July with eight posting drops and five showing gains. The gains were led by a 3.5 percent increase in miscellaneous store retailers, followed by gasoline stations (up 2.4 percent for July), and restaurants (up 1.7 percent). Restaurants is the only category to have a gain in each of the last four months (see second chart).

Overall, retail sales posted a weak result in July, the second drop in the last three months, but remain well above trend. Reopening the economy is supporting a rebound for the labor market and personal incomes, suggesting the economic outlook remains favorable. However, there is still a large gap between wages and salaries and core retail spending (see third chart). That gap is supported by a combination of savings and government transfer payments. As government support fades and consumers return to more normal savings patterns, the gap between core retail sales and wages may close.

This article, Total and Core Retail Sales Fell in July, was originally published by the American Institute for Economic Research and appears here with permission. Please support their efforts.