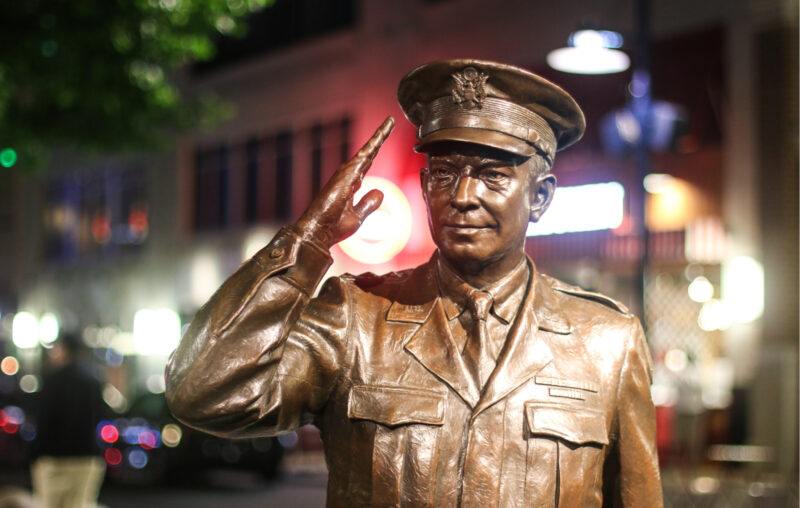 As he left office in early 1961, President Dwight D. Eisenhower warned Americans about the biggest domestic threats to their liberty, the military-industrial and scientific-technological complexes.

Ostensibly, those two aspects of what was later sometimes termed The Deep State or The Swamp defeated the Union of Soviet Social Republics (USSR) circa 1990 and then went in search of other threats, including Islamic extremism. But those threats were never threatening enough to justify the billions sought by defense contractors, Big Pharma, Big Tech, and so forth, so reality often got stretched into outright lies. Remember Colin Powell’s yellow cake speech?

Former president Donald J. Trump tried to turn the power of the two complexes against China, or at least the Chinese Communist Party (CCP), but the complexes resisted. The USSR had been a poor trading partner so helping to bring it down was good business. Ditto with Islamic extremism. But China is too lucrative a market to make trade war upon!

Instead, in 2020, under the mantras of “public health” and “social justice,” the complexes merged into what might be termed The Woke Business Complex. Rather than thwarting communism, its goal is to “make America equitable again” and frankly that looks a whole lot like communism.

“Woke” is indeed a “complex” in Eisenhower’s sense, a network of individuals and institutions able to tap the U.S. federal budget to enlarge the network’s profit and power. Money flows, for example, from the government to universities in exchange for Victim Studies graduates, some of whom become higher education consultants and deans of diversity who push for more Victim Studies programs. Others find their way into the administration of corporations, which understand that their access to federal money, or at least less rigorous regulatory and tax scrutiny, depends on how many Victim Studies graduates they hire.

Were that all, the Woke fleecing of America would be no worse than the rents earned by the military-industrial and academic-medical-scientific-technology complexes, which at least produced aircraft carriers, vaccines, and other ostensibly valuable, if excessively costly, goods. The Woke Business Complex, though, produces only dismisinfoganda. Consider this viral meme, which defines “equity” as equal outcomes, i.e., a sort of communism:

The meme is of course extremely weak because it posits the existence of the capital goods displayed, i.e., the baseball stadium, the teams, and the crates. It also misses the fact that the “equity solution” would arise spontaneously out of the incentives of the people involved. Specifically, the tallest person would not want to stand on a crate as it would make him more conspicuous to stadium security. Presumably, the little guy isn’t on his father’s shoulders for the same reason, though of course that solution also would violate social distancing guidelines as well as the Woke desire to displace the nuclear family to make more room for the State.

Critiques of the meme abound and some are pretty funny, like one that points out that all three are free riding on baseball by poaching a view. If the family is too poor to be able to afford tickets, the meme seems to suggest that “equity” doesn’t include getting all three a more comfortable view of the game.

But we know how to get all three a more comfortable view of the game because it happens every day all summer long. It’s called free markets, which explains not only how and why the capital pictured in the meme was created, it also explains why few people free ride on baseball games anymore. It isn’t in the interest of baseball teams to allow it, so they gave up such chincy fencing a century ago and invited even the poorest of the poor into their games with a menu of inexpensive options.

My favorite, as a yute, was the Knothole Gang, a throwback to the days when fans would peek through holes in pine fences to catch glimpses of games for free. By the 1970s, it was just a cheap ticket promotion. If memory serves, the Rochester Red Wings of the AAA International League in the old Silver Stadium sold Knothole memberships for $5, which entitled the punch ticket holder to attend up to 10 games, albeit only in the bleachers during “big games.” That’s only 50 cents a ticket, not much money even half a century ago, in the midst of the Great Inflation. Today, one can see the Billings Mustangs play 38 times for $12 or the Wichita Wranglers play 10 times for $10.

Bleacher seats suck but they are better than standing on any combination of crates. Moreover, once in the park one was free after the third inning to take any seat in the house until (usually if) the ticket holder appeared. For fiddy cents, I watched the last two thirds of many a game from the comfort of a lower level box seat.

For those who live near teams that do not offer such low prices or free seat upgrades, though, other options are available. I used to listen to Yankee games back in the Chambliss, Jackson, Munson, Guidry days on AM radio from western New York. We had what passed for a television but few Yankee games were broadcast locally as we were technically in the market of the Toronto Blue Jays, and that expansion team, itself a product of free markets, needed all the help it could get. Today, of course, one can subscribe to a month of MLB.TV for peanuts, literally for what it would cost for peanuts for a family of three in some major league parks, and monitor simulcasts or listen to play-by-play or stream games to one’s content.

None of those offer the same experience as being in-park, like paying to park or being around drunkards, so many people who could afford to go to games choose the substitutes instead. It’s all good! Fans have choices because it is in the interest of the teams to provide choices for everyone, from catered, enclosed, private corporate boxes to bleachers. And that, not the ultimately unequal equity panel in the meme, is something we can all cheer.

Just think, though, of the uproarious applause that would occur if governments would stop over-regulating and over-taxing economic agents and allow every human to thrive instead of diverting resources to the Woke Business Complex! Then the poor meme man and his family would be able to attend more games, in proper seats, and not worry about the added expense of transportation and stadium peanuts. But curbing government overreach would require a more “equitable” distribution of political and soft power. Where’s the meme for that?

This article, The Woke Business Complex, was originally published by the American Institute for Economic Research and appears here with permission. Please support their efforts.