The Protests In Cuba Tell a Much Bigger Global Story 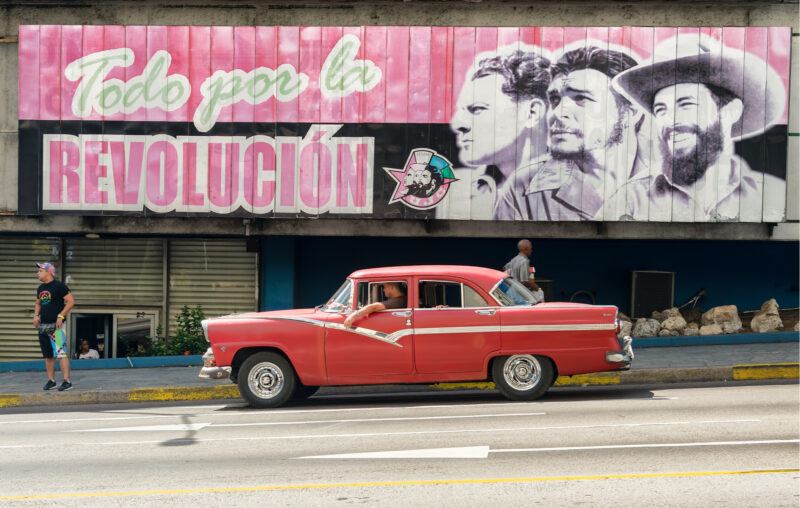 “Videos posted on social media showed security agents and groups of soldiers beating up demonstrators on Sunday. Protesters ripped up portraits of Fidel Castro, while others destroyed police motorbikes and overturned police cars.” Those are the words of Wall Street Journal reporters Jose de Cordoba and Santiago Perez.

Hopefully the video images downloaded from the streets of Havana signal a successful push by the Cuban people to finally free themselves from tyranny. Those in power can’t arrest everyone, and if they try to, or if they try to bring physical harm to protesters, we’ll all know it.

That Cuba’s tyrants will be exposed in real time firstly speaks to the genius of the capitalist profit motive. Even if you believe what’s absurd, that the internet wouldn’t exist if not for the DOD’s Arpanet, what’s undeniable is that opposite-thinking entrepreneurs are the ones who uniquely saw the possibilities of the internet for the masses. An explosion in internet usage globally is now bringing to the world the protests in Cuba. The whole world will be watching assuming Cuban authorities crack down.

What’s happening now is also hopefully a reminder that the embargoes the U.S. has long placed on Cuba are much less than worthless. End them. Yesterday. Even though the “United States” can’t trade with Cuba (actually, exceptions have been made for agricultural and medical goods such that the U.S. is country’s 4th largest trading partner), packages from Cuban Americans to family members continue to flow in to the country. Put another way, if you’re producing valuable goods you’re trading with the world. There are iPhones in Cuba, and their existence there once again makes it possible for the whole world to see a revolution that will hopefully succeed.

Information flows globally when rising internet speeds are matched with the supercomputers that fit in our pockets. Readers might want to keep this in mind the next time they nod their heads about the importance of breaking up “Big Tech,” or shrinking inequality. Whatever the politics of Big Tech founders and CEOs, and whatever the number of zeros in their net worth, life would be much more challenging without them, and the world’s most vulnerable much less safe absent the commercial achievements of the demonized. Again, if Cuban authorities crack down, we’ll all know. There’s a degree of safety with this. For the Cuban people. Thank goodness.

Where it becomes amazing is that the images are actually making it out. No doubt iPhones are increasingly ubiquitous there thanks to generous Cuban American relatives, but the understanding here is that internet access is still spotty. As David Ariosto noted in his 2018 book This Is Cuba, those lucky enough to have phones search endlessly for not-very-good internet access. It’s not an everywhere thing there, and it’s not as fast. Yet the images of protest are making it out. This is a huge deal.

What’s a huge, and very exciting deal is also a reminder of just how much the U.S. political class panicked in March of 2020. To see why, consider the images coming out of what is still economically primitive and desperately poor Cuba. Please think about this truth relative to China.

While smartphones are still a rare luxury in Cuba, and ones well-connected to the internet even rarer, smartphones in China are everywhere. As is well known, Apple sells a fifth of its iPhones there. And then Shenzhen-based Huawei is one of the world’s major smartphone producers, if not its largest.

It’s all a reminder that the asterisks placed next to China-reported deaths related to the coronavirus were superfluous. Even if Chinese authorities weren’t telling the truth about virus deaths in the spring of 2020, their failure to was of no consequence. If people had been dying en masse, there would have been no way for Chinese authorities to hide this truth.

We know this because the internet is much better and faster in China. As Evan Osnos wrote in his 2014 book about the country, Age of Ambition, “the internet had long ago exceeded” what the censors could handle. Technology is faster than politicians and police. In the words of Osnos again, “words were being expressed first, and censored second.” Again, if the virus had been a major cause of illness or death in China, we would have known. As I point out in my latest book, When Politicians Panicked, the Soviets couldn’t even hide the Chernobyl nuclear disaster despite technology that was exponentially more primitive.

What this tells us is that anyone with a clue knew well before March of 2020 that the virus was many things, none of them terribly lethal. Had it been, this would have been major news from the virus’s epicenter where it presumably spread for months sans any kind of political reaction. Yet politicians stateside still panicked on the way to mass job loss, business bankruptcy, depression, alcoholism, loneliness, global spikes in poverty and starvation, etc.

All this happened not because of a virus (it once again had been spreading for months around the world), but because politicians decided they had to do something. And when politicians “do something,” they foist command-and-control on the marketplace (the people) with predictable results.

As always, historians will marvel. The truth tellers that were smartphones matched to internet, along with the stock market itself (see where Apple does so much business, then think….), were telling us very clearly that there was no basis for panic. We the people didn’t, but our political leaders did. Let’s not let them off the hook so easily for their tragic errors, and let’s also not let them forget their tragic errors.

Lastly, let’s use the truth teller that’s the internet to finally free the Cuban people. The whole world is once again watching.

This article, The Protests In Cuba Tell a Much Bigger Global Story, was originally published by the American Institute for Economic Research and appears here with permission. Please support their efforts.