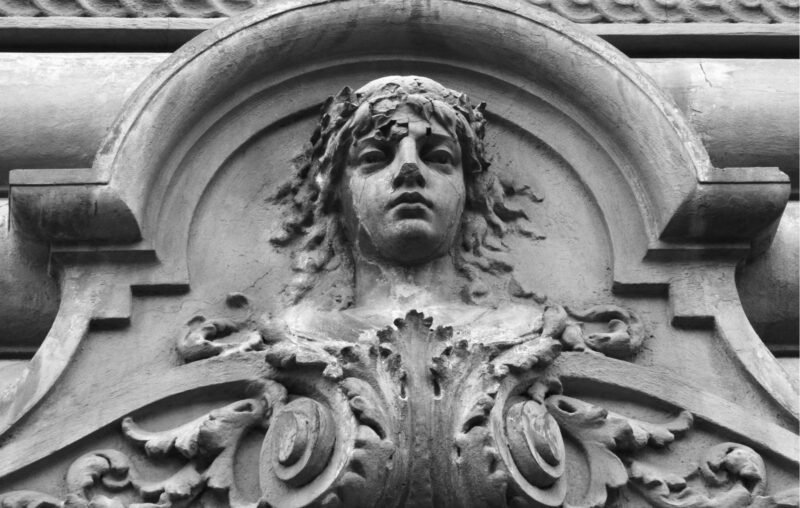 A friend once told me “Money solves problems.” This rings true. My air conditioner breaks. A drink spills onto my computer keyboard. Money lets me replace these things. In situations like these, money is a medium: it gets me to the other side of the experience. Money can take people to the other side of many circumstances. Poor to wealthy. Stressed to unstressed. Frumpy to fashionable. Danny DeVito—that underrated archetype of common humanity—captures this certainty in one of my favorite quotes from pop culture, “Everybody needs money. That’s why they call it money.” (Heist, 2001). The logic here is unassailable. Wittgenstein smiles in his grave. Yet, these basic truths address deeper ideas fundamental to civilization.

Interestingly, or even surprisingly, money as a medium of exchange and solver of problems manifests in art and culture. Indeed, images are a ubiquitous presence on currency. Portraits and symbols adorn the legal tender of countries around the world, and have throughout the ages. Money in this regard is an aesthetic artifact. Even unadorned currency has aesthetic import. Gold and silver coins shine with innate brilliance. The green hue of the U.S. dollar evokes the intrinsic qualities of nature, hinting that monetary exchanges are built into the ecosystems of life itself.

The earliest artistic media were paint (red ochre), sound (voice, animal skin drums, and bone flutes), and the human body viz. the kinesthetics of ritual dance. Rituals used all three mediums, and were early pre-scientific activities, akin to experiments (i.e., doing certain things in a certain manner to achieve a desired result). As problem solvers, the arts of prehistory had a shamanistic quality, and seemed to play a part in Stone Age survival. They helped take people from the material to the spiritual realm, to the “other side” of human experience. Money can do this as well, which may be one reason we enhance our currency with the powers of art.

Historically, important people wore expensive attire. Financial wealth pointed to cultural prestige, and what one wore reflected that directly, symbolically. For millennia, royalty were considered divine or semi-divine; their ascension to the throne was an Assumption, of sorts, to the other side. Money was the medium. In fact, the term derives from the Latin moneta, the title of the goddess Juno in whose temple money was coined. The queen wore her pearls and damask dresses. The king wore his gold embossed mantle. Artistic portraits codified their monetary and metaphysical status. Their faces were stamped onto coins. Their personages legitimized and institutionalized their commercial use. In fact, important political and cultural figures continue to ornament the pictorial space of money.

Today, money as art solves problems in a similar fashion. We need money to survive on the material plane, but the aesthetic implications of money take us to the other side of living: the spirit world of self-worth and emotional well-being. There is, in my opinion, a good deal of subtle but unspoken uneasiness and disappointment that stem from the prosperity of modern life. I think many people feel—in varying degrees—a certain sense of regret or failure for not maximizing their lives and potential. As humans in an abundant, free society, we all now have the time and latent capacity to be brilliant, wealthy, famous, successful, content, happy. These culturally inflected states, however, do not always correspond with our equally human real-world limitations. We procrastinate, settle for less, give in to fear, fail to find our passions, slide into idleness, lethargy, cynicism, or apathy. Time flies, which is one reason we say “Time is money.” And an anxious dread underneath everyday life is that we do not accomplish what we think we should because of our deficiencies, or what we could before it is too late.

The elevating effect of beautiful or expensive things helps assuage this downward, soul-crushing feeling. Adorning one’s body and environment with objects of wealth and prestige takes us to the other side of that emotion. High fashion is closely aligned with fine art. Money marks the transition between the low and the high in these realms. The cultural elite (and those who aspire to be) wear the monikers of important personages to signal their status: Christian Dior, Tom Ford, Coco Chanel. Even the smallest items of these brands cost a fortune. Their names are stamped onto products like coins. The money we spend on these items is thereby transformed into cultural currency. Wearing expensive high fashion apparel instead of cheap no-name clothes transports one psychically, almost transcendentally, to a place over and above the physical reality of the garment. We may no longer have political kings and queens, but the social elite walk on red carpets just the same.

According to the sculptor Constantin Brancusi, material objects have spirits, or essences. Adorning our lives with aesthetic high-value things moves us from the physical to the spiritual as we assume their essence. The transition somehow takes us from the low to the high, to the other side of human problems and emotional experience. Their aura of value and prestige creates an environment where we also feel beautiful and valuable.

It is interesting how things have switched. It is often said that “the rich are getting richer and the poor are getting poorer,” but that is not how it seems in everyday life. I am always struck by the plain or shabby attire of the rich. They sometimes look downright disheveled. Peering into their homes during virtual interviews, kitchens and bedrooms look almost identical to those of middle or lower income households. Our lives seem peculiarly similar to even the super-rich. We all wear the same sneakers, watch the same TVs, use the same computers, and carry the same smartphones. These items can be found even in some of the poorest neighborhoods. The inside of a Honda is not really so much different than that of a Bentley or Rolls Royce, despite the dramatic difference in price. They all get you to the mall in the same amount of time.

This means that expensive clothes and things are not the exclusive cultural signifiers of the wealthy. In the free world, the dynamic between rich and poor is no longer that of liege lord to serf or aristocratic nobleman to lowly commoner, but rather of the rich to the less rich, or meritocratic success to unfulfilled potential. Nevertheless, both groups ride the fortunate waves of market opportunities. The only places in the world where we do not see the gap closing between the lives of the rich and the poor is in less liberal or communist societies, where most people are equally miserable. Unsurprisingly, the road to the happy side of egalitarianism lies in the free market and not in the enforced quest for equity.

Ironically, tyrants, warlords, and dictators decorate their homes and palaces with fine art and expensive things to demonstrate their supposed elevated cultural sensibilities. The Nazis famously stole billions of dollars in paintings to do just that. Ruthless bullies and despots rake their country’s resources to inflate their lives and spirits. They suck the essence out of everything around them. Unhappy people in these places yearn for the expensive items and fashion brands that we in the free world adorn ourselves with as a matter of course. They seek the means to discard their disheveled appearance, and do not envy the unkempt wealthy for presenting themselves as such. The perennial lesson for us unfulfilled and regret-ridden plebeians—usually taught since childhood—is to find happiness where we can, to appreciate the things we have and the hope that exists for the future, regardless of the difficulties of life.

Another is not to envy the material wealth of others. Such feelings lead to corruption and tyranny. The populist slogan “Tax the rich!” is a lower level echo of this dynamic. Things of value are considered so generally because most people desire them. Wealthy people want to keep their money because they can make more money with it. Less wealthy or poor people desire money because they can use it to survive. Most people work within social parameters to acquire it. Tyrants and criminals just steal it. It turns out that valuable things are valuable to everyone. It turns out that everybody does indeed need money.

The relationship between money, culture, and art is so close as to make them identical in some respects. Their association demonstrates how the arts are enmeshed in our lives and how essential they are to well-being. There is a well known cultural distinction between the fine arts and the useful arts. The latter was specifically enumerated in the U.S. Constitution as a way to promote the scientific inventions that make our lives better. As an art historian and philosopher, I always argue that the fine arts also improve our lives. They uplift the spirit, and can help alleviate the problems intrinsic to material and monetary life. But a desire for beauty and elevation should not be conflated with the desire for money. The former brings one to the higher plane of human experience. The latter can take an individual to the other side of moral life, to the dark place of discontentment and the worship of false gods, such as Gucci or Dior, or the jealous goddess Juno-Moneta, or what we also call money.

This article, The Other Side, was originally published by the American Institute for Economic Research and appears here with permission. Please support their efforts.