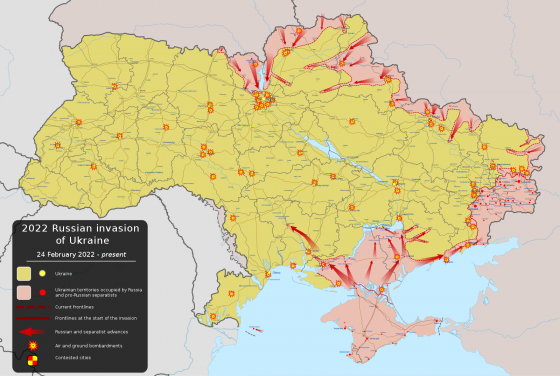 Why can’t major news outlets at least try to be objective?  On the Russians side, we are getting a steady stream of pro-Russian propaganda, and that is to be expected.  But I am particularly disappointed in the mainstream media in the western world.  We have been told story after story of Ukrainian victory, but most of the videos and photos that they are using end up being fakes that were given to them by the Ukrainians.  The biggest fraud of all was the story of “the ghost of Kiev”.  Congressman Adam Kinzinger even tweeted about him.  But it turns out that it was all a giant hoax.  News organizations are supposed to try to verify stories before they run with them, but way too many times that simply isn’t happening.

If you only rely on such sources, you would be tempted to think that the Russians are on the verge of defeat and that the Ukrainians have almost won.

But that isn’t exactly true, is it?

Even military experts in the west are rebuking the press for such shameless propaganda.  The following comes from a piece by a military analyst that was published by a British news source…

Wishful thinking has the upper hand in the battle to shape Western perceptions of the war in Ukraine.

Sympathy for the outnumbered and outgunned defenders of Kyiv has led to the exaggeration of Russian setbacks, misunderstanding of Russian strategy, and even baseless claims from amateur psychoanalysts that Putin has lost his mind.

A more sober analysis shows that Russia may have sought a knockout blow, but always had well-laid plans for follow-on assaults if its initial moves proved insufficient.

The truth is that the Russians are gaining ground every single day.  According to one estimate that I saw earlier, the Russians now control 20 percent of Ukraine, while others claim that it is less than that.

Everyone pretty much agrees that it is slow going for the Russians in the north, but in the south the Russians have been making impressive gains.  In fact, the Russians now have complete control of Kherson…

The first major city in Ukraine has fallen to the Russians, the mayor confirmed on Wednesday, urging his residents on Facebook to obey ‘armed people who came to the city’s administration’.

The city is strategically important, sitting on an inlet of the Black Sea 260 miles west of the separatist enclave of Donetsk.

You can see footage of Russian vehicles in the streets of Kherson right here.

If nobody comes to Ukraine’s aid, it is just a matter of time before Russia wins this war.

But I give Ukrainians credit for putting up a fight.  They didn’t just crumble under the pressure and surrender like some thought that they would.

Many Americans may not realize it yet, but this war is going to have enormous implications here in the United States as well.

On Wednesday, the price of oil hit 113 dollars per barrel at one point…

U.S. oil climbed to the highest level in more than a decade in Wednesday trade, with global benchmark Brent topping $113 per barrel after OPEC and its oil-producing allies, which includes Russia, decided to hold production steady.

The oil market was already tight prior to Russia’s invasion of Ukraine, and with countries now shunning oil from key producer Russia, traders are worried that supply shortfalls will follow.

The price of oil is eventually going to go a lot higher than this, and that is going to severely hurt the U.S. economy.

Commodity markets have been in turmoil since the Feb. 24 invasion. European natural gas jumped as much as 60% on Wednesday — as buyers, traders and shippers avoid Russian gas.

Three sources told Bloomberg that gas and power traders are avoiding new deals with Russia’s Gazprom PJSC. They said European companies are expected to unwind contracts, or clearinghouses will halt trading with Russia’s state-owned energy company and liquidate their positions.

I honestly do not know what Europe is going to do.

The Europeans never should have allowed themselves to become so dependent on Russian gas, and now they have a giant mess on their hands.

Because of the conflict in Ukraine, the price of wheat has been surging higher as well…

The grain traded “limit up” during the day, meaning to the highest amount the price of a commodity is allowed to increase in a single day.

As for World War III, it is just getting started.  In addition to Ukraine, we will want to keep a close eye on Taiwan, and open conflict between Israel and Iran could erupt very soon.

I had such a bad feeling coming into this year, and so far it has been a real doozy.

The mainstream media will likely continue to spin the facts about the war in Ukraine for as long as they can.

Should You Buy The Dip In Alaska Air Stock?