The Logic of Civic Irresponsibility and the War on Terror 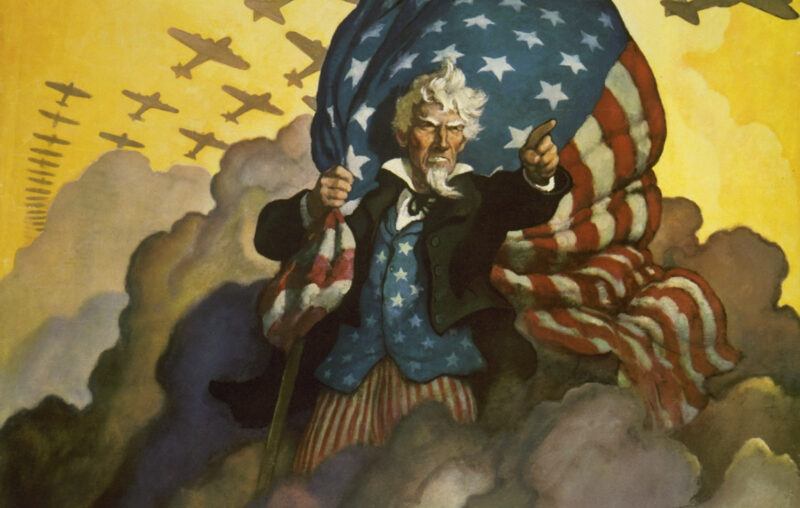 Propaganda seems like an all too normal part of the relationship between a people and their government. Leaders sometimes need to distort reality to get followers to focus on the goals leaders hope to achieve. Of course, a governmental elite guiding a democratic people by irrational appeals, outright lies, and other distortions of reality seems to be at odds with the ideals of a democratic republic. In a democratic republic, the leaders are the people, and the goals of that society are as diverse as the interests of the various individuals making up its political community. Christopher Coyne and Abigail Hall’s most recent book attempts to remind us of the harms that government propaganda does to the quality of governance for a democratic republic and the diverse interests of its people.

Hall and Coyne begin this worthy task by taking a brief peek at propaganda throughout American history. Paul Revere’s 1770 engraving, The Bloody Massacre at King Street, eliminates the Bostonians attacking a single British soldier instigating the massacre and replaces it with cold-eyed British soldiers shooting unarmed Bostonians. This original sin of our national inclination for propaganda is bookended by the emergence of the Pentagon propaganda machine that concerned Senator William Fulbright – as he reflected on how little law constrained the Department of Defense for using its considerable public relations capabilities on the American public.

They also mention how propaganda is carried out through a range of techniques best classified as logical fallacies such as appeal to authority, appeal to patriotism, appeal to “us versus them,” and appeal to simple slogans and images. These techniques are used to frame issues, coordinate citizens around the government’s objectives and goals, and install a sense of insecurity and fear among the public.

Coyne and Hall’s contribution to the study of propaganda lies in applying the lens of political economy to the American military’s efforts to shape public opinion in its favor and how that threatens the quality of our governance. They begin this investigation by describing a model of the ideal protective state. Under the conditions of the ideal protective state, those acting to protect the public are held accountable by the public, and therefore perform their duties effectively and efficiently. There is no room for political opportunism in such an ideal state.

They then describe what they understand to be a more realistic model of democracy where information asymmetries (not every actor has the same information) make it possible for political opportunism and rent-seeking behaviors to emerge. In this model, politicians, voters, and bureaucrats are self-interested actors, and information asymmetries can lead the agents of the people (politicians and bureaucrats) to begin to follow what is beneficial to the agents as opposed to the principals (the voters). Special interests can benefit from the incentives motivating politicians and bureaucrats at the expense of voters.

National security is an area where secrecy can make information asymmetries between the public and decision-makers even more significant than they usually are and is likely to produce less effective and efficient policies than in areas where such asymmetries are minor. The remainder of their book looks at how these dynamics unfold in the war on terror and offers some possible solutions to avoid the wasteful amounts of resources being poured into the defense sector and the harms that a militarized society does to our civil liberties.

They begin their case studies of the war on terror with a detailed analysis of how the Bush administration led the United States into war with Iraq with a keen focus on lies surrounding weapons of mass destruction, an Al-Qaeda connection to the Iraqi regime, and the presentation of a broad international coalition committed to the war. After examining the lead-up to the war and how the Bush administration used its role as a gatekeeper of information to shape public opinion through misinformation, they explore how the Bush administration preceded to demonize the enemy to keep the American public committed to the war and question the patriotism of anyone not supportive of the administration’s policies. Though they explain the propaganda mechanisms supporting the war, Coyne and Hall do not detail what interests mobilized these mechanisms to support.

The next three chapters in the book investigate how sports is leveraged to support the military and the war on terror, how an elaborate bureaucracy is foisted upon the American public without any substantial gains in security, and how Hollywood is co-opted to paint the military in a favorable light by being given access to locations, actors, and equipment that would be prohibitively expensive for the studios to gain access to without the cooperation of the Department of Defense.

The histories and case studies in these chapters are engaging, and their details we will leave for the interested reader to uncover for themselves. One of the general ideas is that the Department of Defense uses DOD money to subsidize patriotic displays at sporting events, hijacking fandom to endorse American foreign policy. Another problem coming from the world of sports is how public officials insist on discussing complex foreign policy issues in terms of the more clear-cut language of the sport’s enthusiasts, thereby dumbing down our discourse on foreign policy.

The application of economic reasoning comes through most clearly when Coyne and Hall examine the harmful effects of the Transportation Security Agency on civil society and how ineffective the agency is from a cost/benefit analysis perspective – the TSA spends $133 million for every life they save. They do not give an exact calculation of the cost to personal privacy that TSA procedures impose.

Their chapter on the collaboration of Hollywood and the Department of Defense on movie projects is an excellent piece of scholarship, but it raises some interesting questions. To gain access to resources from the DOD, Hollywood is asked to modify film content to address DOD objections. As might be expected, the DOD withdraws support from any film that does not place the military in the best of lights. You will need to read the book to understand how intrusive and petty the DOD can be. Who can blame them, given they have the tough job of recruiting an all-volunteer army – they are not going to pay for anything that makes that job any more difficult than it already is. Thus, we have a situation where the American public, as it entertains itself, is given extremely positive images of the American military.

Having made a case that we are being shaped by a propaganda machine active from the top of government all the way into our TV rooms to support a war on terror that is degrading the quality of our representative institutions and personal liberties, Coyne and Hall propose a list of reforms. They examine the effectiveness of law, whistleblowers, media, and individuals in resisting the government’s propaganda campaigns. For a variety of reasons, each of these checks on propaganda is highly ineffective. Law needs to be enforced by the Attorney General’s Office. The Attorney General is not overly zealous in prosecuting propaganda efforts that support the policies of the President who appointed the Attorney General. Whistleblowers, despite protections of the law, remain vulnerable to administrative law and bureaucratic politics. The media collaborates with the government on national security issues, and laws exist that can punish the media if they violate national security concerns.

Finally, they examine the role of the individual in resisting propaganda. They put their greatest hope in the individual citizen to take the time and effort to think through the consequences of militarism and support law, whistleblowers, and the media to make the national security state accountable. Of course, public choice theory explains why citizens are rationally ignorant of governmental policy. What we know about the role of public opinion in shaping foreign policy does not offer the same hope that Coyne and Hall have in the power of an informed citizenry to end the war on terror. The public is ignorant of foreign affairs. The public esteems the military above any of our governmental institutions. When war breaks out, the crowd quickly rallies to support the government. To end the war on terror and our society’s drift toward militarism, we either need a different elite or a different public. Perhaps Coyne and Hall’s book is a step in the social learning necessary to take a step back from policies that have made us poorer and less secure by educating that elite and public.

This article, The Logic of Civic Irresponsibility and the War on Terror, was originally published by the American Institute for Economic Research and appears here with permission. Please support their efforts.