The Horrors Of A Noninflationary Thanksgiving 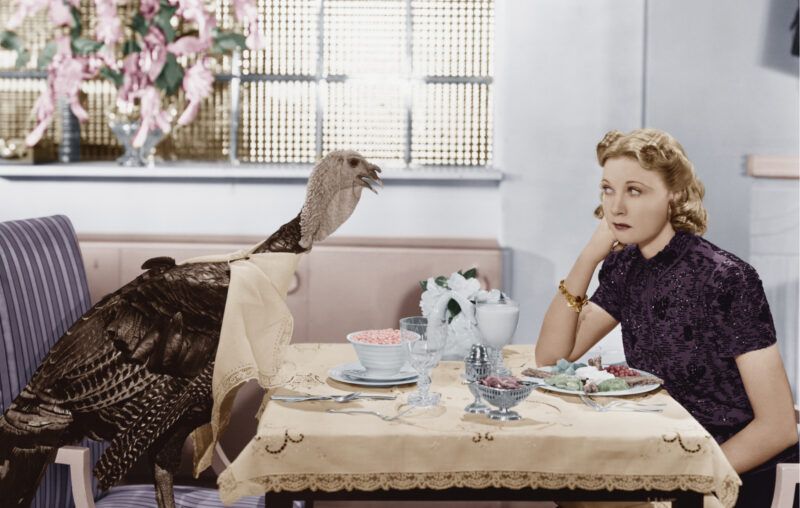 Thanksgiving is one week away. There’s always much to be thankful for, but this particular holiday arrives against a backdrop of worry and complaints. Inflation is a dominant concern right now, with the Bureau of Labor and Statistics’ Consumer Price Index (CPI) showing prices broadly rising 6.2 percent on a year-over-year basis.

Among other things, food prices are up. And Thanksgiving is among the most food-centric American holidays.

It’s not merely hearsay that consumer fears are rising. The November 11th release of the University of Michigan Consumer Sentiment Index showed a drop from 72.5 to 66.8 between October and early November 2021. The decline was several times greater than expected, with the accompanying statement underscoring the source of the souring sentiment.

Consumer sentiment fell in early November to its lowest level in a decade due to an escalating inflation rate and the growing belief among consumers that no effective policies have yet been developed to reduce the damage from surging inflation. One-in-four consumers cited inflationary reductions in their living standards in November, with lower income and older consumers voicing the greatest impact. Nominal income gains were widely reported but when asked about inflation-adjusted gains, half of all families anticipated reduced real incomes next year.

It seems essential to distill the matter at hand. The rapid updraft in the general price level seems to have begun in earnest in March or April of 2021, about a year after extraordinary fiscal, monetary, and social policy measures were taken in the face of the Covid pandemic. Those ultimately included a 37 percent increase in the M2 money stock, trillions of dollars in stimulus funds at a time where up to 300 million people were not working, and widespread, largely indiscriminate lockdowns/stay-at-home orders. The former policy measures disrupted supply chains, creating unanticipated stoppages in critical commercial ventures and congestion in transportation systems as well as widespread unemployment.

A recent article in the Washington Post offers some advice for concerned feast planners, one of which is to be flexible. But is that a sound, actionable recommendation with the general price level ascending and, in the case of certain items, soaring?

Indeed. In fact, there are a handful of categories in which prices not only have not risen over the last year. It’s absolutely not necessary to pay higher prices to bring a perfectly serviceable Thanksgiving dinner together, and I’m happy to provide my findings to price sensitive hosts.

According to BLS indices, meat, fish, and poultry prices are up by almost 12 percent over the last year.

But turkey is another matter entirely. Just a few weeks back, the Des Moines Register–a source which, to me, seems authoritative–informed readers that they have been warned:

If you’re supplying the turkey for this year’s Thanksgiving gathering, buy it now…Turkey production is down year-over-year, the U.S. Department of Agriculture department said in October. The supply of birds in cold storage through August, the end of the seasonal buildup to the holiday, was 20 percent below the same time a year earlier.

And the prices of turkeys have consequently burst to the upside.

[T]he price of a 15-pound turkey has surged from $11 in 2018 to nearly $21. That’s the highest in decades, after a 25 percent jump in just the past year. And just about anything else you might need to make that dinner complete is probably costlier, as well, with eggs up nearly 30 percent in a year and sugar up 12 percent.

But don’t despair: your family needn’t choose between a larger bill or going meatless for the holiday. As a matter of fact, there is an option which will likely save you and your family money. Don’t believe me? According to the Bureau of Labor Statistics, and seemingly against all odds, the price of frankfurters has fallen over the last year.

And, we’ve got our main course!

Agricultural commodities are up a tremendous amount over the last year. The price of the generic wheat futures contract, which is obviously a major component of bread, is up 29 percent since November 2020. Corn prices, by the same measure, are up 42 percent over the same period. Those factor directly into the prices of such Thanksgiving essentials as rolls and stuffings. (If we are sticking to our cost-cutting mandate, it also takes hot dog buns off the list). Gravy, made with beef or chicken broth, falls victim to the same meat price-driven increases described previously: they’ve seen a 1.75 percent increase over the last year. What, if anything, can be added to our bunless hot dog “feast?”

Fear not: cheeses are down in price over the last year. As I wrote earlier this year, the lumber frenzy caused by the impact of lockdowns on sawmills and the homebound DIY craze ultimately led to a collapse in the price of certain dairy products.

So sticking with a strict cost-cutting mandate, we’ll have to forgo stuffing, rolls, buns, and gravy. No worries though: we’ve got processed cheese for our wieners.

More Green for the Greens

When it comes to vegetables, on a year-over-year price basis we’re mostly out of luck – except for lettuce. A plain salad could appear amid the cut-rate Thanksgiving spread.

But it would be an extraordinarily plain salad, since over the last year salad dressing is up 7.7 percent and tomatoes up 20 percent. (Croutons, which are a bread and therefore grain product, are already off the menu.) Pre-mixed salads and even frozen vegetable and fruit prices are up year-over-year as well, 6.8 percent and 1.6 percent respectively.

What about cranberries, for which secondary only to turkey the holiday is renowned? Sorry, no. They’re up 2.8 percent since last November. According to the CEO of Ocean Spray, his firm

has to pass on the rising production costs to consumers…”My advice is to be absolutely flexible. Whether it’s jellied, whole or fresh cranberries,” he added. “Plan early and make sure you get to the grocery store. It will be a happy Thanksgiving, but you have to demonstrate more flexibility than you have in the past.”

And for the Sweet Tooth

And what of the much-anticipated dessert course? Will there be pie, cake, tarts, or turnovers for dessert? Those have risen just over 4 percent since last November, so, no, no, no, and no.

Whatever is included in the CPI category known simply as “snacks?” One assumes these include chips, crisps, pretzels, and so on, which have increased in price by 3.2 percent over the last year.

Can we at least, after our hot dogs, processed cheese, and undressed, plain lettuce salad, have cookies?

They will not be washed down with milk, though: milk prices are up 4.3 percent over 12 months.

And to imbibe? You’re better off not asking. Your friends and neighbors will have paid 1.5 percent higher for beer, wine, and other such consumables than they did last year, and over 5 percent more for soft drinks and other carbonated products.

There’s always good old H2O. Water is healthy. And to fully savor the flavor of Thanksgiving frankfurters wrapped in cheese slices between bites of unseasoned lettuce, water is inarguably the best possible choice. Variety may indeed be the spice of life; but in a sudden inflationary outbreak savings are garnish enough.

Look on the Less Dim Side

As I was completing this article, a television wonk said (paraphrased): “Yes, food prices are higher now than they were last year, but used car prices are up several times that!” So, in the spirit of giving thanks, we should all be grateful that..used cars..are not on the menu?

A comparison of the costs of the two meals, “traditional” versus “price sensitive,” over the course of roughly one year (‘price change’) follows.

I’m guessing there will be a tiny minority of readers who’ll think that hot dogs, cheese, lettuce, and cookies with lukewarm water (I’d suggest cool or cold water, but energy prices are rising too) constitute a lackluster Thanksgiving spread. But one of the other tips from the Washington Post was, in the face of shortages and rising prices, to rethink traditions. And the policy alchemists in Washington, DC are compelling tens of millions of Americans to do exactly that, in conjunction with dissipating purchasing power and abating standards of living. With family and friends around, there’s no reason why inflationary Thanksgivings can’t be almost like previous Thanksgivings. Almost.

This article, The Horrors Of A Noninflationary Thanksgiving, was originally published by the American Institute for Economic Research and appears here with permission. Please support their efforts.

Down 45% Since November, Is Palantir Stock A Buy?