The High Price of Popcorn 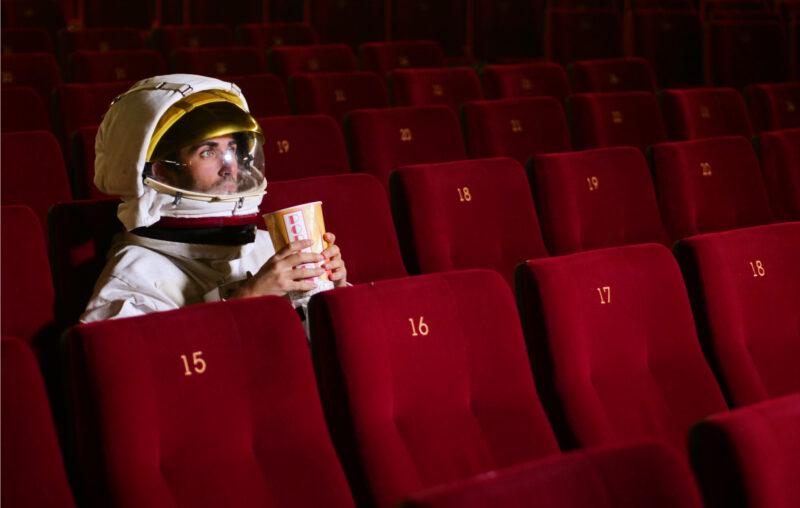 Summertime is the season of the blockbuster movie. And what could go better with a fast-paced action flick than a giant tub of buttered popcorn?

People everywhere are starting to return to pre-lockdown lives, which includes heading out to the local Cineplex to see a movie … any movie!

But when they arrive, they indubitably will complain about the high price of popcorn. “Movie popcorn is too expensive!” my students shout. Not surprisingly, this grousing feeds the growing belief that businesses exist just to rip us off. Fortunately, the “high” price of popcorn provides a great opportunity to teach economic literacy and show that entrepreneurs are really helping us.

Is Popcorn “Too Expensive?”

Teaching about the price of movie snacks is one of my favorite political economy lectures. I begin by asking how many students think movie popcorn is “too expensive?” About two-thirds of students raise their hands (with the other third sleeping). I then ask, “How many of you continue to purchase it?” About half of the hands remain raised. “Well, then, for those of you who continue to purchase it, it isn’t too expensive.”

This glib response contains an important kernel of truth: If something is too expensive for you, you won’t buy it. For some people popcorn is too expensive, but for other folks it is not. It is that simple. We will return to this simple profundity below.

But granted, movie popcorn is pretty darn pricey. At my favorite theater, a large tub of buttery crunchiness sold for $10.25. The tub is roughly equivalent to two bags of microwave popcorn, which retails for about one dollar per bag at the grocer. That means the markup on theater popcorn is about five times what you pay by doing it yourself at home while watching Netflix. Recognizing that the theater probably buys cheaper in bulk, we are looking at a hefty profit margin!

So, what accounts for this high price? How can theaters get away with cinematic robbery?! My students have a number of answers, most of which are wrong. But the incorrect explanations are worth reviewing since they bring economic nourishment of the tastiest form.

The Theaters Own a Monopoly on Snacks.

Monopoly power is invariably the first explanation to be given. Theaters own a monopoly over snacks once you are in the theater. They gotcha and you have no willpower to resist. My students further remind me that those greedy theater owners prohibit you from bringing in your own food, which raises the probability that you will starve to death in your cushioned seat before the final battle scene unless you crawl your way to the snack stand.

Seems reasonable, but I have never had any problem taking food into a theater, and I even “open carry” bags of Gummy Bears purchased for a fraction of the price beforehand. (I don’t like popcorn, which is relevant below.) The secret is that no manager wants their 17-year-old minimum-wage employee wrestling with a 50-something patron to get them to drop the contraband candy. Bad optics. The theater will discourage the practice of outside food with signage and scowls, but it isn’t enforced heavily. This weakens their monopoly power.

More importantly, the theater actually does not have a monopoly on snacks and entertainment. You have options from watching Netflix at home with some Jiffy Pop to playing cribbage with your friends at the Valley House Brewery. Or you can attend a baseball game and eat hot dogs, play board games after a backyard barbecue, or have a public reading of F.A. Hayek over wine and cheese. These are all things that the theater competes with every day.

Unless you never stepped foot into a movie theater, no one should be surprised by the high price of theater snacks. I know that an evening at the movies with my wife costs roughly $50 when we factor in concessions. Is that $50 expenditure worth it relative to other options? If it is a movie we want to see and other options don’t provide as much value, then yes! If not, then no. The theater has to compete with my other options by offering an enticing product at a better price than our alternatives. No monopoly exists.

The Movie Theaters Only Make Money on Concessions, not Tickets.

After I shoot down the monopoly explanation faster than Bruce Willis takes out terrorists, a student invariably mentions having a friend in “the industry” and knows the real story. Movie theaters must charge the price that the film company sets and thus can only make a profit with high concession prices. When I ask what that student’s friend does, it usually is “an usher” – a deep Hollywood insider!

This answer doesn’t stand up to scrutiny either. While studio executives contract with theaters over how much revenue must flow back to the film production company, they really are indifferent to where that money comes from. I show my students two one-dollar bills that I received as change from both the theater ticket office and concession stand and ask them to identify which dollar came from where. They can’t. Neither can studio bosses. As long as the money is green, it doesn’t matter where it came from. A studio can demand $10 per ticket sold, but if the theater wants to charge $1 to customers and supplement the other $9 by washing cars, the film executives don’t care.

(Actual contracts involve a complicated risk-sharing arrangement between the studios and theaters so as to protect both parties from cinematic duds [e.g., any Adam Sandler film] and reward them for unexpected blockbusters. But at the end of the day, it is not a matter of where the money comes from, but rather that it comes at all.)

After this theory fails to pass the Odorama test, a few other explanations are offered by students including the possibility that theaters have high overhead costs. The high price of teenage labor, cleaning the sticky floors, and throwing away unpurchased popcorn at the end of the shift helps to explain why concession prices are higher. Most importantly, empty seats represent a deadweight loss for a theater that can sometimes be quite high considering the mortgage expenditures on the large building needed to fit several silver screens.

Price Discrimination: Variety Is the Price of Life

It is at this moment of the class discussion that I spring upon the students one of the most eternal truths of life: not everyone likes popcorn. Some people just like movies sans snacks. Others love to crunch and munch while watching celluloid heroes.

This manifest observation is crucial to understanding the pricing structure of the theater experience. Not everyone is buying the same product. For some people, going to the movies is a bundled experience of popcorn, soda pop, and action flicks. For others, it is just the movie. The former typically obtain more value from a night out at the Cineplex, whereas the latter get less value.

The puzzle for the movie theater owner is to tease out who gets more value and charge them a higher price overall while not chasing away the customers who don’t get as much value from the theater experience. This process is called price discrimination. The idea is that people have different reserve (or reservation) prices for goods and services. A reserve price is the highest price that an individual would pay to access that good or service. Some people really love popcorn and would happily pay $20 a tub, whereas others (like me) won’t even consider a purchase at one dollar. Likewise with movie tickets.

To try to maximize revenue, theater owners will try to price the different component parts of the movie night experience according to how different people value it. Here’s how it works.

Assume that only two goods are being sold – movie tickets and popcorn. In order to purchase the popcorn, one first has to purchase a ticket to enter the theater. Figure 1 shows different ticket prices as dashed lines (red, green, and blue).

Now assume we have five different people. Two of these people (A & B) love movies and popcorn and are willing to pay up to $20 each for the entire experience. Their reserve price is marked off by the blue dot. The owner would naturally like to collect the full $20 from these two folks.

But wait! There are more people in the world who have different reserve prices. Customers C and D have reserve prices of $13 and wouldn’t pay more than that. We’re not sure if they like popcorn, but we know they won’t pay over $13 for a night of scary monster movies. If the owner sets the ticket price at $18 and charges only $2 for popcorn (Scheme Z), C and D will not come to the movies because the ticket price ($18) is above their reserve price ($13). This means there will be some empty seats in the theater that could have potentially been filled if the ticket price was lower. As mentioned above, empty seats are a theater owner’s worst nightmare.

To fill the seats, the owner could charge only $2 for the ticket and $18 for the popcorn (Scheme X). The low price of entry would entice Customer E who has a reserve price of about $4 (a cheapskate who probably sneaks in candy). Seats would be filled, but the owner runs the risk of populating the auditorium with individuals who want cheap ticket prices but forgo snacks.

If we examine Pricing Schemes X and Z, we see that Z would generate the theater $40; customers A and B each pay $18 for the ticket and $2 for the snack ($20 each x 2 customers = $40). Unfortunately, nobody else comes to the movie theater because the tickets are too expensive.

Under Scheme X, all five customers show up for the movie at a ticket price of $2, but only two people (A and B) are willing to buy the $18 tub o’ corn. This results in the theater collecting only $46 in revenue (… you do the math).

Another alternative is to price the tickets at $12 and charge $8 for popcorn (Scheme Y). This attracts Customers A, B, C, and D resulting in $64 of revenue for the theater. Customer E is priced out by the higher ticket price, but this prevents the non-snack patrons from crowding out the popcorn munching customers.

Notice that Scheme Y underprices tickets wherein Customers C and D get to keep an additional dollar of the value. Pricing is an inexact science but if you are worried about filling seats, it is better to err on the side of underpricing than overpricing. Those “greedy” owners may actually be giving you a better value at the box office than you think, particularly if you just want to watch the movie (and sneak in your snacks).

A Final Kernel of Wisdom

Pricing puzzles are among the most interesting things one can think about in economics. They get to the heart of how we allocate scarce resources to who most values them. And price discrimination – trying to match the price of a good/service with a consumer’s actual value for the good – is a key concept that helps us understand that not all sellers are tying to “rip us off” because of their “market power.”

So the next time you reach for a handful of buttery popped corn, give a stomping cheer for the entrepreneurial creativity of the theater owner who made it possible for a wide variety of people to enjoy a summer blockbuster.

(My thanks go to Steven Landsburg’s The Armchair Economist and Richard McKenzie’s Why Popcorn Costs So Much at the Movies for explaining all of this to me.

This article, The High Price of Popcorn, was originally published by the American Institute for Economic Research and appears here with permission. Please support their efforts.