The “Fortune of the Commons”: Why Are There Still Blueberries in the Fields? 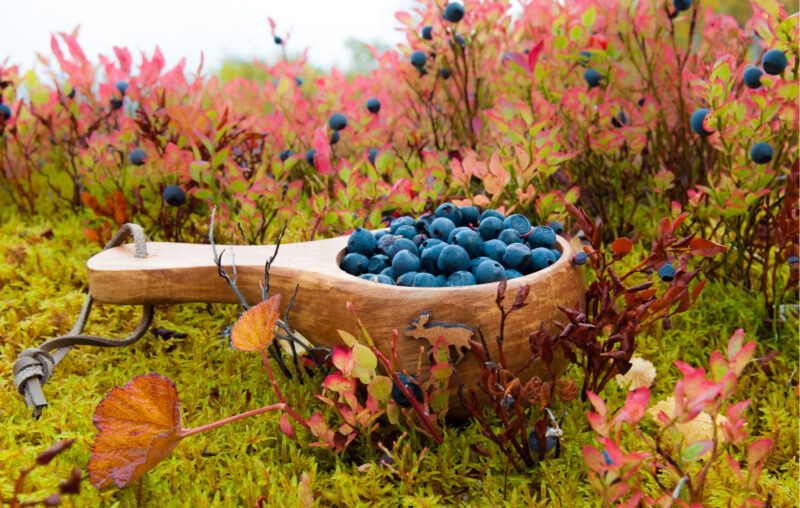 I live in quite a sparsely-populated place, with lots of wilderness and nature. This time of year, we have plenty of late-summer berries in season, and it isn’t uncommon to find stray hikers hunched over bushes eagerly picking blueberries and crowberries. This is what most people, economists included, would expect: Mother Nature provides us with free stuff, stuff that most people highly value, and all you have to do is reach out your hand and gather up the goodies.

About once a week for the last month, I have brought Tupperware containers to the mountains closest to my home and returned an hour or so later with more blueberries than I could possibly eat. Surprisingly enough, I rarely meet other blueberry fanatics with boxes filled to the rim of this deep purple gold. If we look at the free stuff awarded to anyone who picks them from an economistic tragedy-of-the-commons point of view, this is very odd: if human nature, human greed, and the capitalist spirit inevitably are to blame for the general exploitation of the world’s commons, then why are there still blueberries in the fields?

Why have enterprising individuals and utility-maximizing agents not vacuumed the bushes clear of berries? Especially when these same individuals are likely to buy imported blueberries at the supermarket for quite a lot more than Mother Nature charges.

Mike Munger, a senior fellow with AIER, has an illuminating story about (surge) pricing at an airport Starbucks. With his econ-glasses fully on, he observed an extraordinary number of people waiting in line for the privilege of paying Starbucks for their morning coffee. The end of the line efficiently selected for those who thought the combined price of money and waiting worth it:

That’s surge pricing, folks. The last person in line had decided the price was not too high, and waited. But the people who walked away decided, for whatever reason — they didn’t like waiting, perhaps their plane was leaving soon, whatever — that the “price” was too high. You could object that the price was actually the same for everyone, and the only difference is the wait time. But that’s the point. The cost of coffee that morning was the sum of the money price plus the annoyance and frustration of waiting in line.

My blueberry story is similar. Although there are free blueberries on the mountains of practically unlimited quantity, and the ones consumers get in the store come in small boxes, with high price tags, and the occasional mold – the combined price of zero plus the effort and time it takes to weather the elements and actually pick them, is too high for most consumers. Zero can actually be more expensive than what the store charges, because it requires the consumer to make a physically demanding additional trip. Also, one cannot live exclusively on blueberries.

Another example of where people’s market-based options and substitutions leave money on the commons-table are sheep. In these lands, with plenty of overgrown hills and grassy plains for sheep to turn indigestible forage into tasty and valuable meat, the commons remain underused. The original tragedy-of-the-commons story teaches precisely the opposite: if nobody owns the land, and there is no communal effort to contain the use, every farmer will max out the number of animals put out to graze, with the predictable result that the commons will spoil; next year, there won’t be enough grass to go around. Human greed; Capitalist failure.

Yet, in my hills the grass remains uneaten and the sheep stock has dwindled to the lowest in over a century.

Again, from a tragedy-of-the-commons point of view this doesn’t make much sense: if nobody else grabs the grass, why not maximize your free animal feed and stack every inch of the mountain passes with sheep?

Well, it turns out that nobody wants to be a sheep farmer anymore. There is more lucrative and less arduous work available in the cities. Economic shifts, too, work against the exploitation of those commons. On top of a rising world consumption of meat, the proportion of sheep and lamb has fallen to 5% from around 7-8% just fifty years ago. Not surprisingly, young people don’t want to be shepherds any more than people want to eat lamb. Still, the remaining farmers don’t have the kind of monopolistic price power that progressives everywhere routinely imagine, and thus cannot jack up prices to inflate their profitability. Not enough consumers want what they supply, at the price and locations where they can supply it, even if the (summer) feeding is free.

We might refer to this phenomenon of leaving money on the table, or berries in the fields, as the “Fortunes of the commons,” the inverse of the tragedy of the commons. Just because something is held in common does not require government oversight, through price fixing or quotas. Neither do more free-market/bottom-up solutions fully explain the residual cases. Just because a common is not overexploited does not mean informal agreements are what stand in the way of commons-type mayhem by selfish capitalists.

There is another dimension to the commons than greedy and short-termist human hubris; we also have to consider market substitution and consumer preference. Markets and economic growth may, contrary to anti-market beliefs, be the saving grace to many natural commons, from saving the whales from certain extinction to preserving wild game in Africa today. There are literally countless other examples.

To give a final, absurd yet clarifying example: The oxygen in the air is literally life-giving for us humans. It is an abundant commons, where nevertheless our maximizing use of it does nothing to upset the future oxygen balance of the planet. We do not need a guardian of that common, because nobody’s consumption of it is even remotely close to affecting future use.

I should be clear here that I’m not overstressing this point. There is a difference between consuming berries, i.e. the product of a natural process that leaves next year’s production fully intact, and excessive fishing which literally eats the stock from which the future stock is derived. The fish is both the product and the production process, whereas my berries are exclusively the product (the sheep-grazing example is somewhere in between, so the above point still stands).

I’m not saying that the heavy exploitation of the world’s fish stocks or some of its forests is therefore sustainable. Instead, what I’m saying is that sometimes the supposedly inevitable tragedy-of-the-commons can, with prosperity and economic growth, be turned on its head to become the Fortune of the Commons.

That’s food for thought while picking this week’s berries.

This article, The “Fortune of the Commons”: Why Are There Still Blueberries in the Fields?, was originally published by the American Institute for Economic Research and appears here with permission. Please support their efforts.