The Fall of the Dominoes 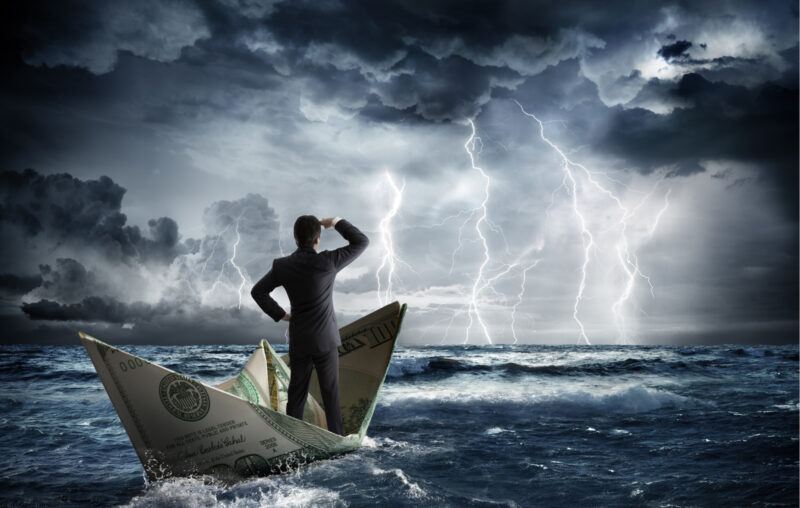 Inflation, as measured by the PCE (personal consumption expenditures) index, was, on an annualized basis, over 7 percent in March and April, and over 6 percent in May and June. Going by the more popular CPI (consumer price index), annualized inflation was between 8 and 11 percent in those same months. For perspective, the last time the economy experienced four consecutive months of inflation this high was at the tail end of Jimmy Carter’s stagflation.

The CPI is based on a fixed basket of goods, whereas the PCE’s basket of goods varies as prices change. For example, suppose an increase in the price of beef causes consumers to shift to eating less expensive chicken. The CPI will rise because the price of beef has risen, but the PCE might not because people are buying less high-priced beef and more low-priced chicken. Consequently, the CPI gives a clearer picture of what’s happening with consumer prices, while the PCE gives a clearer picture of what’s happening with consumer spending. But, regardless of which measure one considers, it’s clear that something untoward is happening with prices.

What’s happening is the latest in a sequence of dominoes that began falling in the early 20th century. The first was the rise of progressive thought, epitomized in 1909 by the publication of Herbert Croly’s book, The Promise of American Life. Progressive Americans viewed the federal government as a useful tool for achieving good rather than, as the Founders saw it, a dangerous tool for preventing harm. Normally, a two-party system would tend to force a compromise between the two views. But progressives coalesced in the Democratic Party and that party came to control the House, the Senate, and the White House, and subsequently to appoint a majority of the Supreme Court. For almost fifteen years, starting in 1933, we effectively ceased to have a two-party system. This was the first domino.

From the Progressive Era forward, what the Constitution said started to matter less than what the nine Justices said it meant. And Justices became adept at reading both the Constitution and legislation to mean whatever they wanted them to mean. Every time Justices read meaning into words that weren’t plainly there, it became easier for later Justices to do the same. And so we can draw a clear line from the Supreme Court’s declaration that private activity on one’s own property constitutes “interstate commerce” (Wickard v. Filburn, 1942), to its interpretation that a law holding state actors accountable for crimes actually made them immune from prosecution (Harlow v. Fitzgerald, 1982), to its redefining as a tax what Congress stated was a penalty (National Federation of Independent Business v. Sebelius, 2012), thus ensuring that the Affordable Care Act passed constitutional muster.

All this growth came at significant cost. The 1933 federal budget (in 2021 dollars) was around $85 billion, versus $6.8 trillion in 2021. Even on a per-capita and inflation-adjusted basis, the federal budget today is more than 30 times what it was in 1933. And there are only two options for financing that massive spending: taxes or debt. Higher taxes are never politically popular. If politicians tax the poor and middle class, they lose voters. If they tax the rich, they lose influence and campaign donations. But borrowing is much more politically attractive. With borrowing, the constituency most harmed can’t vote the politicians out of office because it hasn’t been born yet. So, in an ironic nod to the Founders, the way the government was able to grow so large was through taxation without representation.

In 1933, Federal debt was 40 percent of GDP. By 2021, it had ballooned to more than 130 percent of GDP – and that’s not counting unfunded liabilities (largely Medicare, Social Security, and pension benefits the government has promised but won’t have the money to pay). Including those, federal financial obligations are somewhere between 500 and 1,100 percent of GDP. The weakening of constitutional constraints led to explosive growth in the size of government, which led to explosive growth in the cost of government: the fourth domino.

The problem with debt is that lenders expect interest. Also, political opponents can use a large public debt to convince skittish voters to vote out the spendthrift party in exchange for the fiscally prudent party (the latter of which seems always to be the party out of power). But how is a government to borrow massive amounts of money without driving interest rates through the roof? Borrow from a lender that doesn’t care about how much interest it earns because it can print all the money it wants: the Federal Reserve.

Today, the Fed is free to print as much money as it likes – subject only to political pressures. But, for much of the 20th century, the Federal Reserve’s printing ability was strictly limited. Prior to 1933, US dollars were redeemable in gold. The gold standard constrained the Fed to printing a fixed multiple of the amount of gold the Treasury held. From 1933 through 1971, foreign governments, but not the private sector, could redeem US dollars in gold. On August 15, 1971, President Nixon removed the last vestiges of the gold standard by uncoupling the dollar from gold entirely. The uncoupling made it possible for the Federal Reserve to print as much as it liked. And so fell the fifth domino.

With a federal debt doubling every eight years, by the second decade of the twenty-first century, politicians were running out of places to borrow. Americans and foreigners continued to loan ever increasing amounts. But the government’s need to borrow started growing faster than lenders’ willingness to lend. The Federal Reserve, now unconstrained by a gold standard, took up the slack as the lender of last resort. In the early 2000s, the Fed held around $700 billion in US Treasury bonds. A succession of quantitative easings following the 2008 housing crash more than tripled this number to almost $2.5 trillion. Further quantitative easings following the Covid crisis doubled the number again to more than $5 trillion. The Federal Reserve is now close to eclipsing the Social Security trust fund as the largest holder of federal debt. Abandoning the gold standard initiated a cycle wherein the Fed’s ability to monetize federal deficits led politicians to become more comfortable with deficit spending, and the more they spent, the more pressure it put on the Fed to monetize the spending. This cycle was the sixth domino.

Measured in today’s dollars, the federal deficit crossed the $0.5 trillion mark for the first time in 1992, and for the second time in 2004. In 2009, it blew past the $1 trillion mark for the first time, settling at a whopping $1.7 trillion, and then followed up with three more consecutive trillion-plus years. The deficit then fell back to the $0.5 trillion mark for a couple of years before surging again to $1 trillion in 2019, and more than $3 trillion in 2020 and (so far) 2021. Politicians of both parties have learned that they can win elections by promising ever-larger payouts to their voting bases, and that voters have become comfortable with eye-watering deficits. Politicians have also learned that they can rely on the Fed to monetize their deficits. And that gives us the most recent falling domino: rising consumer prices. The past few months of CPI inflation between 8 and 11 percent is the price we pay for an unrestrained federal government.

Yet why did it take this last domino so long to fall? The Fed has been jacking up the money supply for decades while inflation has remained in its usual 1 to 4 percent range. The answer lies in financial markets.

As the Fed increased the money supply, that money tended not to land in goods and services markets, but in financial markets. And inflation calculations only look at prices of goods and services. With money pouring into financial markets, we didn’t see inflation. We saw instead rising stock and bond prices. Just prior to the lockdowns, when news of Covid first broke, the S&P 500 fell more than 30 percent. But, when the lockdowns began, as unemployment reached highs not seen since the Great Depression, as one-third of small businesses across the country faced closure, and as it became increasingly uncertain how long any of this would last, the S&P 500 rebounded. From late March to late June of 2020 – at the height of Covid uncertainty – the S&P 500 gained 40 percent. Those remarkable gains over a period when the stock market should have been falling, or at the least holding steady, were likely driven by a flood of new money. Indeed, over that same period, the money supply grew at a rate 13 times faster than normal. And while the Fed did slow money growth starting in June 2020, the rate of growth from then until now has still been double what is usual. The reason we’ve been seeing inflation over the past several months is that, as people and businesses have become comfortable that the Covid crisis is behind us, they have started moving money out of financial markets and into goods and services markets.

We’ll see the next domino fall when it becomes clear that the recent spate of inflation is not temporary. People will clamor for the Fed to rein in inflation, but it will be unable to do so. Federal borrowing is now so great that the Federal Reserve’s monetary policy has become a servant to politicians’ fiscal policy. The annual interest expense on the debt is over $0.5 trillion. If the Fed were to slow money growth in an attempt to combat inflation, interest rates would rise. And if interest rates rose merely to their historical average, the annual interest on the debt would exceed $1.3 trillion. Runaway government spending has put the Fed in the position of having to choose between sustained and significant inflation and government insolvency. And government insolvency is not a viable option.

The sequence of falling dominos began when we allowed – indeed, encouraged – the federal government to break out of its constitutional constraints. Where constitutional constraints failed to restrain the government, financial constraints should have held. But decoupling money from the gold standard removed financial constraints. Where constitutional and financial constraints failed, political constraints should have held. Voters should have found unaffordable government unacceptable. But the ability to enjoy government largess while foisting the bill on future generations placated voters. The constraints that will hold are the laws of economics. If politicians continue to rack up multi-trillion dollar deficits, and as the Fed increasingly becomes the major source of funding for those deficits, we can expect to see persistent inflation in the 8% to 15% range. That’s not hyperinflation, but for the United States it is unprecedented. Within the next decade or two – likely beginning with Social Security’s looming insolvency – the fact that it is mathematically impossible for our government to make good on its financial obligations will become apparent. How voters will react then is anyone’s guess.

The sequence of falling dominoes is too far along to stop. What we can do at this point is to look back at key points where we could have stopped them falling – like taking seriously the idea of a limited government and the principle of sound money – and ensure that, when the dust settles, we warn future generations not to repeat those errors.

But then again, the Founders warned us.

This article, The Fall of the Dominoes, was originally published by the American Institute for Economic Research and appears here with permission. Please support their efforts.