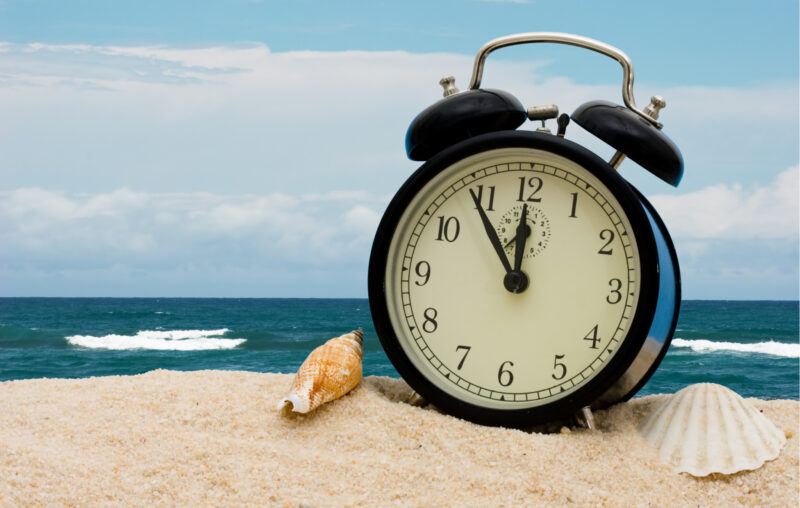 It’s a trivial statement to say that history is dominated by time. We might even say that it consists of time. Still, the ways we have used to capture time, or measure time, are far from trivial.

Few things are as constant and objective as time, or so most of us would think. Time itself moves relentlessly forward at a constant speed (at least in our regular Earthly affairs). In a way time just is. Seemingly, it operates outside of human control or influence: the Earth spins a full turn around its axis in a day, and that’s that.

Not so, argues a book fresh off the presses by David Rooney, a historian of time with a career at the Royal Observatory in Greenwich and the Science Museum in London. About Time: A History of Civilization in Twelve Clocks is a fascinating look at timekeeping from Ancient Greece to the modern era of satellites and high-frequency trading. He convincingly shows that time, but more so timekeeping, was always a deeply political topic. It isn’t a constant feature of our world; its measurements and use have changed radically, have impacted people’s lives and societies in very different ways, and compared to the International Celestial Reference Frame, Earth rotates around its axis once every 23 hours, 56 minutes and 4 seconds (not every 24 hours).

Rooney’s isn’t a tale of the mechanisms behind clockmaking or about the artistic and decorative functions of many famed clocks, but a tale of the hidden role that timekeeping has played in human society. Mr. Rooney has hit a sweet spot where his brief and accessible chapters reveal fascinating human stories, mixed with empire and revolution, trade and movement, catastrophe and greed. We’re taken on a fast-paced run through humanity’s obsession with time: Water clocks, sundials, sand clocks, and lunar-distance models were much more than an everyday information device; they were a way to regulate life, to assert political control, and to expand overseas empires.

By focusing on not just clocks but timekeeping more broadly, he shows that time was always political: it was quarreled over, produced and extended for reasons of control, regulated and manipulated in the pursuit of political ends, and often violently opposed. Mr. Rooney takes us on a visit to Amsterdam, tracking down the clock governing trade in the world’s first stock exchange. To concentrate the securities trade, and regulate it, the authorities permitted trade during a single hour in the large courtyard of the building in Dam – fining everyone still there after hours. We learn that London once had a publicly-listed company, the Standard Time Company, to which hundreds of other companies subscribed in order to get accurate time signals.

Some industrialists in the 19th century would wind up clocks to keep workers working longer, or even commission purpose-made ones that slowed down when the factory’s energy supply was low. As the carrier of two British-issued history degrees, I have heard plenty about the oppressive regimes of capitalism’s early days (long hours, child labor, filthy and oppressive facilities), but never that factory owners used clocks to manipulate working time.

I learned about the troubles of navigation and how clocks – chronometers – solved the critical problem of longitude in the 1700s. I learned that the British suffragette movement in the 1910s would violently attack all manner of things, particularly the very male institutions of timekeeping, observatories and scientific endeavors. Rooney lists some of the targets:

Global Positioning Systems operate, unbeknownst to me, by satellites carrying highly accurate and purpose-built clocks. Since radio waves have constant speed, tiny differences between the time signals from several satellites (“trilateration”) allow us to know exactly where we are: “the time kept by these 300 or so clocks reaches more human beings than any other clock that have ever been made.”

It’s just time and clocks, I thought when first opening Mr. Rooney’s book, but he quickly persuaded me that there was much more to the history of time than that. Take another fact that most people think they know: before railways, every place had its own local time – midday was when the sun reached its zenith, which was at a different time across the same longitude. Even in a relatively small country like Britain, that could differ by minutes: In the 1840s, Glasgow was running a good 17 minutes behind Greenwich Mean Time. This became a problem when railways, running at set times, needed to synchronize across local time zones. Thus, enter standard time.

Rooney shows that while this is true enough and did occur at stations and for railway companies in the 1840s and 8150s, it did not instantly universalize across people’s everyday lives. Locally, Brits could still live perfectly well 15 minutes ahead or behind GMT – at least until they needed to catch a train. Local time and “London time” were often reported together.

Instead, as so often in British life, the pubs were involved. And the Victorians’ desire to regulate morals and behavior. In the 1870s, the moralists wanted to limit drinking, partly by licensing the opening hours of pubs. To fine somebody for breaching such rules, you needed access to the exact time – and the pubs needed to know it too. With different local times and a dearth of available clocks, opportunities for skirting the rules abounded. Not until 1880 did Parliament pass a law that set the standard time for all British laws to be given by the observatory in Greenwich – more than a generation after the railways had standardized on Railway Time. Rooney concludes that “local time passed into history not because the railways used it, but because 1870s anti-alcohol reformers wanted to use clocks to police their moral crusade.”

We have plenty of more modern examples of time manipulation to affect behavior or make political statements. Countries across the world, and even regions within countries, have opted for different time zones, and not always by the full one-hour differences we’re fairly comfortable with calculating: Venezuela under Chávez observed a half-an-hour different time zone; today, India is 30 minutes ahead of Pakistan; and Nepal 15 minutes ahead of India, following a meridian by a mountain in the Nepalese Himalayas. Until 2018, North Koreans used a different time zone than their Southern neighbors. New Zealand’s Chatham Islands are 45 minutes ahead of mainland New Zealand. China, ranging territorially over five time zones, operates a single time – though its western-most province uses Beijing Time and Xinjiang Time in parallel, as a form of silent rebellion.

Time, its measurements, and what they have given rise to in the form of navigation and information, is clearly much more than the routine moving of hands across the dials of an old grandfather clock. Rooney shows us how.

This article, The Business of Time is to Tick, Tick, Tick…, was originally published by the American Institute for Economic Research and appears here with permission. Please support their efforts.