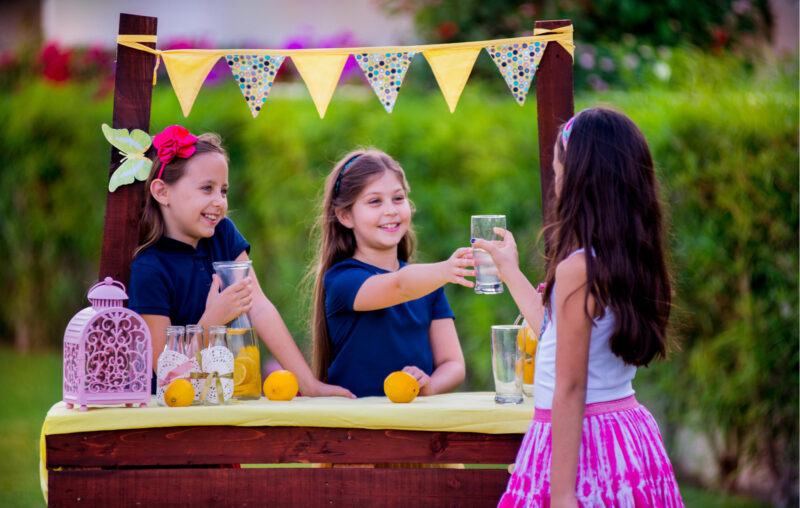 Summer is here and with Covid-based restrictions on fun finally receding (we hope), a return to normalcy promises the ubiquitous picnics, softball games, and sidewalk lemonade stands run by kids on their vacation away from school.

But wait a minute! Not all those Great American activities may be legal.

Indeed, those little entrepreneurs selling refreshing cups of lemony lusciousness may be violating a gaggle of government regulations. Country Time Lemonade, which provides business assistance to kids seeking to dip their toes into the retail beverage marketplace, has counted only 16 states where it is legal to sell lemonade from a makeshift front yard stand. (California, which has been chasing away businesses in droves, is one of these states amazingly. Go West, young entrepreneur!)

And it is not just that lemonade stands are illegal in 34 states, but there are actually watchdog busybodies who will call the authorities to shut down these shady enterprises even before Mother Nature rains on their parade (also see here, here, here, and here). What would we do without citizen snitches and fast-acting bureaucrats who bring social order back to a nation spiraling out of control?!

This is troubling news. Police showing up to shut down the local lemonade stand teaches children that entrepreneurship is punished in society. It teaches them that their creativity can only be realized in the dark shadows of the underground economy – “squeezeasies,” the non-alcoholic version of speakeasies in the 1930s. This is all the more alarming when one realizes that many of the news stories linked above involved inner city youth who were doing their best to overcome difficult economic circumstances.

Not surprisingly, police and city bureaucrats showing up to put the kibosh on these stands raise the hackles of many parents and sane citizens who see this as a theatrical overstepping of government authority. Reacting to the outrage, Colorado, Wisconsin, and Texas became the most recent states to liberalize their laws regulating “underage” entrepreneurs. (When did we ever start thinking commercial creativity had an age limit?!) My home state of Washington also considered similar reforms, although the bill stalled in the legislature when the representatives went home to avoid coronavirus.

That’s the good news. Adults are starting to recognize that government regulations can be a significant barrier to youthful fun and lessons in financial responsibility.

But if we are outraged at such onerous regulations being placed on the commercial gusto of children, shouldn’t we similarly be upset by government intervention blocking the entrepreneurial spirit of adults? This is, surprisingly, an uncomfortable question to ask of people who will argue adamantly for the needs of strict regulatory codes being imposed on their local businesses.

When I recently (and sarcastically) reminded members of my local community that lemonade stands are still illegal in Washington State, they pooh-poohed me for being a killjoy, and rightfully so. But when I further probed why “regular” businesses must operate under the licensing and regulatory codes that prevent kids from getting into the beverage business, the conversation turned. “If we don’t regulate local restaurants, all hell would break loose!”

Really? Why would we think that?

The reasons for prohibiting our youth from selling lemonade and other beverages include concerns over health and sanitation, noise and traffic congestion, and a general desire to have government give you the stamp of approval (i.e., licensing) to keep consumers protected from ne’er-do-wells and charlatans.

However, when it comes to a comparison between the ten-year olds who set up a temporary beverage business and a restaurateur wanting to make her enterprise a long-term venture, who do we think will be devoted more to health and safety? I do not know how many readers have raised young ‘uns, but my experience informs me that the age where a child is most interested in selling lemonade does not coincide with the age of optimal hygiene. Of course, there could be parental oversight ensuring that all precautions are taken in the preparation of the drinks and snacks being sold, but that assumes the parent is good at monitoring the chaos that usually ensues (and actually cares).

Restaurant owners, though, have a strong incentive to provide the best experience for their customers, including a reasonably clean and sanitary environment with a product that doesn’t sicken their diners. Failure to do so is likely to run the business into the ground as word spreads throughout the community that the restaurant is subpar. The obvious objection here is that there are many establishments that appear to be below reasonable hygienic standards, but it should be noted that they are most likely doing so under a regulatory regime that requires them to be up to par to begin with. It may be more a general concern with personal reputation than the regulatory shadow of the state that guides a restaurateur’s desire to maintain sufficiently sanitary standards.

(It also should be noted there exists a niche market for the seemingly “unsanitary” greasy spoon restaurants that can offer low prices to people who are not as concerned about cleanliness. The present author happens to be one of those customers.)

Lest one think that businesses left unregulated will try to cut costs and produce unhealthy or dangerous products to bolster their profits, there is a strong history of just the opposite. Underwriter’s Laboratory is a classic case where businesses seek out the stamp of approval from a private (non-government) watchdog to ensure consumers that their products are designed safely.

And as a scuba diver who is aware that there are a hundred ugly ways to die underwater without the proper safety equipment and guidance, I rely upon the private monitoring of PADI to help me choose which dive shops to patronize. Add to this the Business Roundtable, the Better Business Bureau, and specialized trade groups that help keep businesses on the up-and-up without resorting to coercive government regulations. Lemonade stands don’t have these private backstops, but restaurants voluntarily associate with them.

Likewise with other externality problems (traffic, congestion, noise). Children operating a business on a short-term basis (perhaps a weekend, if not just a few hours until boredom sets in) have little care for how traffic patterns or noise will chase away future customers. Established businesses do though. While there may be some collective action problems amongst enterprises to deal with these issues, local chambers of commerce do a great deal to coordinate the interests of business owners in such a way that benefits customers.

As for merely getting the permission of government to run a business, the issue of licensing is one that is fraught with all sorts of rent-seeking behavior wherein preexisting businesses seek to limit the entry of newcomers in a way that doesn’t benefit consumers (also see here, here, and here). This is only possible if they can leverage the power of government to restrict their competitors. If we think it silly to require occupational and/or business licenses for some kid’s lemonade stand, why should we think it is a good idea for a food truck, barbershop, or gymnasium?

The summertime lemonade stand serves more than just refreshing beverages. It stands as a quintessential reminder of how people of all ages love to barter and exchange, as Adam Smith once reminded us. It is in our nature. If we only had the imagination to perceive a world free from commercial barriers, much like our young entrepreneurs do, the world would be less sour and much more sweet.

(Note: I credit Amelia Carlson with coining the term “squeezeasies.” The thoughts and opinions expressed otherwise are of the author alone.)

This article, Taking a (Lemonade) Stand for Free Enterprise, was originally published by the American Institute for Economic Research and appears here with permission. Please support their efforts.