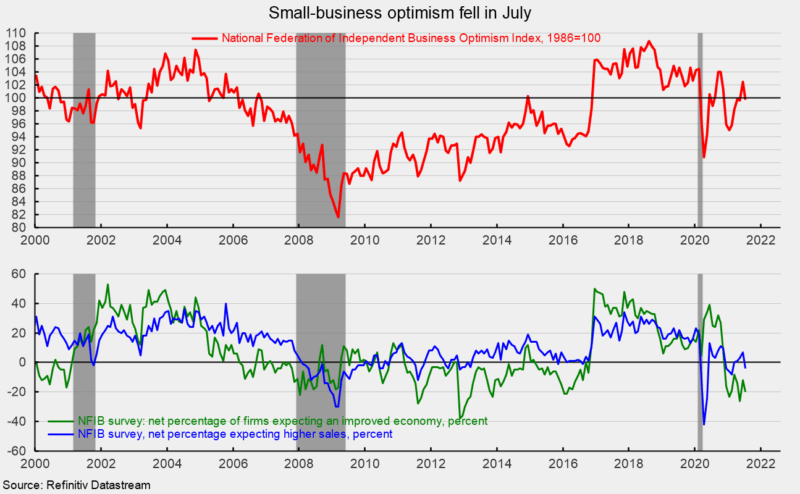 The small-business-optimism index from the National Federation of Independent Business fell 2.8 points to 99.7 in July, reversing the 2.9-point gain in June, leaving the index below the 104.5 result from February 2020 (see top of first chart).

Details within the report suggest that small-business owners are becoming less optimistic about future general economic conditions and about their own business. The report once again highlights the labor difficulties small businesses face as well as the impact that materials shortages and supply disruptions are having on business activity.

Within the details of the small business survey, the net percentage of respondents expecting better economic conditions (“better” minus “worse”) fell 8 points to -20 in July versus -12 in June. This index had been as high as 39 in June 2020 but has been negative for eight consecutive months (see bottom of first chart).

Along with the weak results from the expectations for the economic outlook and the outlook for sales, the percentage of respondents believing now is a good time to expand came in at 13 in July, down 2 points from the previous month, and a generally weak result compared to the 2017 through 2019 average of 26.1.

Twenty-six percent of firms have plans for capital expenditures over the next three to six months, up 1 point from the prior month. Fifty-five percent of small businesses have made capital expenditures during the past six months, up 2 points from the prior month. That is below the typical percentage in the upper 60s during the late 1990s but above the mid-40s percentages during the 2008-09 recession. The most popular type of expenditure was equipment (39 percent) followed by vehicles (23 percent) and building/land improvement (14 percent). The most popular outlay range was $10,000 to $49,999.

The labor shortage has 38 percent of firms saying they have already increased compensation over the past three months while 27 percent intend to increase worker pay over the coming months.

The labor shortage is also keeping quality of labor at the top of the most important issue for small businesses. Among the 10 issues listed in the survey, quality of labor again ranks first at 26 percent, just 1 point below the survey high of 27 percent. Taxes were second at 19 percent while government regulation (red tape) was third at 12 percent and inflation was fourth on the list at 11 percent (see third chart).

Overall, the survey suggests that the small-business sector of the economy is growing more cautious about the economic outlook. Furthermore, a shortage of skilled workers continues, supply-chain disruptions are making inventory replenishment difficult, and rising Covid cases are boosting uncertainty.

This article, Small Business Sentiment Drops on Labor and Materials Shortages, Weakening Economic Outlook, was originally published by the American Institute for Economic Research and appears here with permission. Please support their efforts.