Slower But Broad-Based Gains for Private Sector Payrolls in September 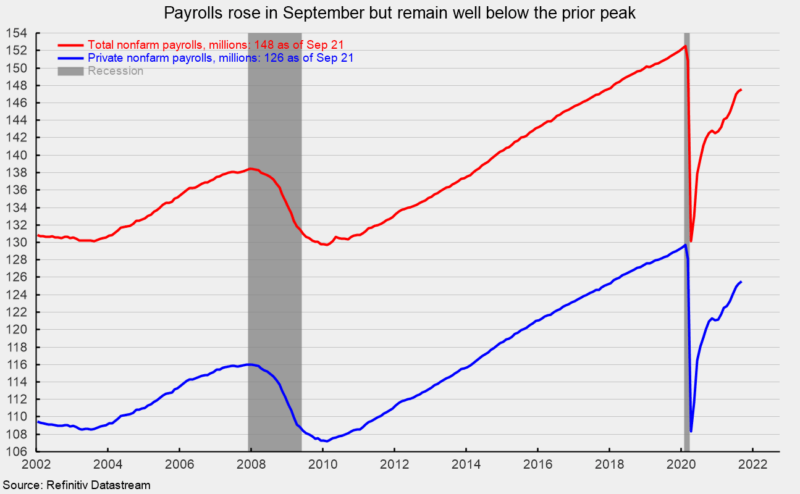 U.S. nonfarm payrolls posted a disappointing 194,000 jobs gain in September, the second slowest of the 17-month recovery after a 306,000 decline in December 2020. The increase follows the addition of 366,000 in August but is the second month in a row of slowing increase. Gains over the past year have been somewhat erratic and may suggest an extended time before employment reaches the pre-pandemic level (see second chart).

Still, the September rise is the ninth in a row and 16th in the last 17 months, bringing the nine-month recovery to 5.050 million and the 16-month post-plunge recovery to 17.392 million. This is still well below the 22.362 million combined loss from March and April of 2020, leaving nonfarm payrolls 4.97 million below the February 2020 peak (see first chart).

Sharp drops in state and local government education employment (down 16,600 and 144,200 for September, respectively) were the primary reasons for the relatively large difference between total nonfarm payrolls and private payrolls. The sharp drop in public education employment may be due to changes in hiring patterns due to the pandemic. Shifting hiring patterns can cause problems with seasonal adjustment.

Despite the disappointing gains, breadth of growth among the industries was positive as nearly every industry posted a gain in September. Within the 317,000 gain in private payrolls, private services added 265,000 while goods-producing industries added 52,000.

After 17 months of recovery, only one of the major private industry groups has more employees than before the government lockdowns – transportation and warehousing. On a percentage basis, two of the 14 private industries shown in the report have declines of 5 percent or more since February 2020. Leisure and hospitality leads with a 9.9 percent drop since February 2020, while mining and logging comes in second with a 6.8 percent loss. Information services is now just under 5 percent, coming in third at 4.8 percent. For the labor market as a whole, total nonfarm payrolls and private payrolls are down 3.4 percent since February 2020 (see fourth chart).

The average workweek rose to 34.8 hours in September versus 34.6 in August. Combining payrolls with hourly earnings and hours worked, the index of aggregate weekly payrolls gained 1.4 percent in September. The index is up 9.4 percent from a year ago.

The September jobs report posted a disappointing gain of 194,000 in September. Private payrolls were more robust with a 317,000 increase, but both have slowed considerably over the last two months versus the six months from February through July, a worrying trend. Despite the nine consecutive monthly gains and 16 increases in the last 17 months, payroll employment remains well below peak measures from before the pandemic.

Furthermore, ongoing materials shortages, logistical and transportation bottlenecks, and labor issues, particularly in the manufacturing sector, continue to restrain the ability of supply to recover as quickly as demand, resulting in significant upward pressure on prices. Rising prices has led to falling consumer confidence and is boosting the risks for the economic outlook. A consumer retrenchment would further hinder the recovery though the damage will be far less than the carnage caused by widespread lockdowns. Overall, the outlook is for continued recovery but the threats and headwinds to growth remain significant.

This article, Slower But Broad-Based Gains for Private Sector Payrolls in September, was originally published by the American Institute for Economic Research and appears here with permission. Please support their efforts.