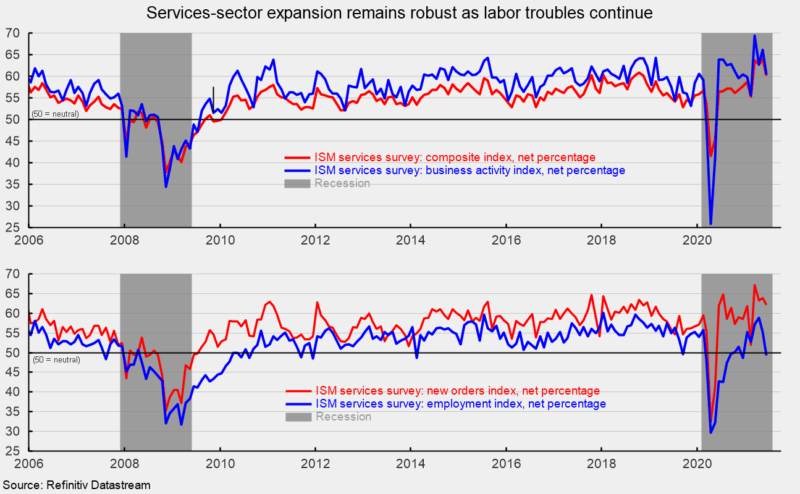 The Institute for Supply Management’s composite services index decreased to 60.1 in June, dropping 3.9 points from 64.0 in the prior month. The index remains solidly above neutral and suggests the 13th consecutive month of expansion for the services sector and the broader economy (see top of first chart).

Among the key components of the services index, the business-activity index (comparable to the production index in the ISM manufacturing report) decreased to 60.4 in June, down from 66.2 in May, but still a strong result (see top of first chart). This measure has been above 50 for 13 consecutive months and above 60 for the last four months. For June, 16 industries in the services survey reported expansion versus two reporting contraction.

The services new-orders index decreased to 62.1 from 63.9 in May, a drop of 1.8 points from May (see bottom of first chart). Similar to the activity index, new orders have been above 50 for 13 months and above 60 for the past four months – a strong performance overall. For June, 16 industries reported expansion in new orders in June while one reported a drop.

The new-export-orders index, a separate index that measures only orders for export, dropped to 50.7 in June versus 60.0 in May. Six industries reported growth in export orders against eight reporting no change and four reporting declines.

Backlogs of orders in the services sector likely grew as the index increased to 65.8 percent from 61.1 percent. Backlogs of orders have grown for 12 of the past 13 months. Fourteen industries reported higher backlogs in June while four reported a decrease.

The services employment index came in at 49.3 in June, down from 55.3 in May and the first drop below 50 since December (see bottom of first chart). Twelve industries reported growth in employment while two reported a reduction. The report notes that survey respondents are reporting that it is “increasingly difficult to find qualified candidates to fill open positions” and “employees have been somewhat slow to return to work, and there has been turnover as some pursue new opportunities in a hot job market.”

Supplier deliveries, a measure of delivery times for suppliers to nonmanufacturers, came in at 68.5, down from 70.4 in the prior month (see top of second chart). It suggests suppliers are falling further behind in delivering supplies to services businesses, but the slippage has decelerated from the prior month. The slower deliveries are a result of labor constraints, production difficulties, and transportation problems. Seventeen industries reported slower deliveries in June.

The prices index continues to reflect labor and logistical issues that are restraining supply as demand surges following the easing of government lockdown restrictions. The prices paid index fell to a still-very-high 79.5, down from 80.6 in May (see bottom of second chart). Seventeen industries reported paying higher prices for inputs in June while just one reported lower prices.

The latest report from the Institute of Supply Management suggests that the services sector and the broader economy expanded again in June. Several respondents to the survey mentioned robust levels of activity but also increased price pressures and materials shortages, particularly related to supply chain, logistics, and transportation issues as well as labor difficulties. Overall, the outlook remains tilted to the upside.

This article, Services-Sector Survey Points to Continued Expansion in June, was originally published by the American Institute for Economic Research and appears here with permission. Please support their efforts.