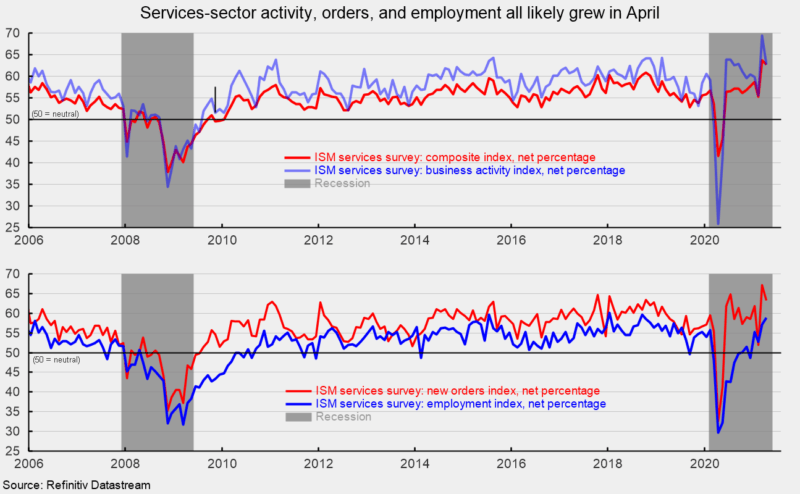 The Institute for Supply Management’s composite services index posted a reading of 62.7 in April, dropping 1.0 points from the record high 63.7 in the prior month. The index remains solidly above neutral and suggests the 11th consecutive month of expansion for the services sector and the broader economy (see top chart).

Among the key components of the services index, the business-activity index (comparable to the production index in the ISM manufacturing report) pulled back to 62.7 in April, down from 69.4 in March but still a very strong result (see top chart). For April, 17 industries in the services survey reported expansion while one reported contraction.

The services new-orders index decreased to 63.2 from 67.2 in March, a fall of 4.0 points from the record high in March (see bottom chart). Seventeen industries reported expansion in new orders in April while one reported a decline. The new-export-orders index, a separate index that measures only orders for export, rose to 58.6 in April versus 55.5 in March. Eight industries reported growth in export orders against two reporting declines.

Backlogs of orders in the services sector likely grew as the index increased to 55.7 percent from 50.2 percent. Backlogs of orders have grown for 10 of the past 11 months. Eleven industries reported higher backlogs in April, ahead of the four that reported a decrease.

The services employment index came in at 58.8 in April, up from 57.2 in March and the highest level since September 2018 (see bottom chart). Eleven industries reported growth in employment while four reported a reduction. The Bureau of Labor Statistics’ Employment Situation report for April is due out on Friday, May 7th. Consensus expectations are for a gain of 893,000 private, nonfarm-payroll jobs. The unemployment rate is expected to drop to 5.8 percent. The ADP estimate for private, nonfarm payrolls released today shows a gain of 742,000 for April.

The latest report from the Institute of Supply Management suggests that the services sector and the broader economy expanded again in April. Several respondents to the survey mentioned improving levels of activity but also increased price pressures and materials shortages, particularly related to supply chain, logistics, and transportations issues as well as labor difficulties. Overall, the outlook is tilted to the upside.

This article, Services Sector Expands Again in April, was originally published by the American Institute for Economic Research and appears here with permission. Please support their efforts.