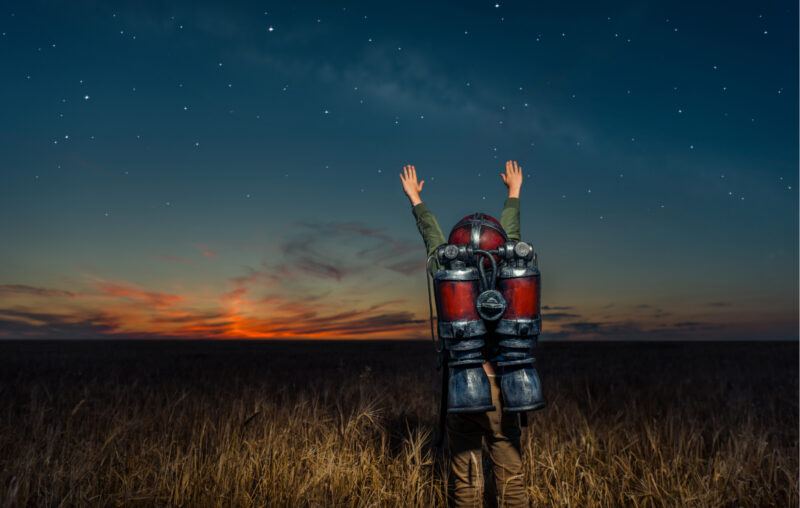 “To the next generation of dreamers: if we can do this, just imagine what you can do.” Those were the words of Virgin Galactic’s Richard Branson. From space.

Hyperbole arguably tends to take over during times of excitement, but Branson made plain to his millions of followers that reaching space was the culmination of a childhood dream. No doubt the concept of space did capture the imagination of all-too-many young people way back when, at which point Branson’s long been known for his expansive vision. He made it to space.

That he did speaks volumes about why he did. What Branson has accomplished certainly wasn’t cheap. Put another way, the “millionaires next door” aren’t working feverishly on achieving launch to places beyond. In reality, the space game is one for billionaires. For now it’s Branson, Jeff Bezos, and Elon Musk working on ways to make space travel possible. Please keep this in mind.

While governments spend copious sums of money not their own on the known, people like Branson, Bezos and Musk are almost as a rule working to introduce us to the unknown, or what we can only imagine. As Musk said back in 2019 about Tesla’s Cybertruck, “Nobody *expects* the Cybertruck.” Yes! Exactly! Entrepreneurs take us to all new places, while governments waste enormous sums very badly delivering something much worse than the present to us.

Two paragraphs ago the reader was asked to “Please keep this in mind” that Branson, Bezos and Musk are working tirelessly to make space travel possible, and that’s the point. Three men with expansive minds and abundant funds, they have the means to rush an entirely different future into the present, or the not too distant future. Please keep this in mind the next time politicians defend their indefensible tax hikes on the rich by saying that the increases are a way of forcing them to “pay their fair share.”

To make such a boast is to loudly acknowledge one’s desire to halt progress. Lest readers forget, it’s not your garden-variety millionaire working on making space flight a reality. Only people for whom $1 million is a tiny rounding error would have the funds necessary to make something so audacious possible. The superrich can make the unimaginable real precisely because they’ve got the unspent wealth to do so. To tax the rich is to shrink the amount of wealth directed toward moving up tomorrow, as opposed to funding an uglier today care of politicians.

Of course, there’s really no such thing as government spending. Governments have no resources. By definition. Their spending power is a function of their ability to arrogate to themselves a portion of the production created in the private sector. In other words, government spending is merely politicized allocation of precious wealth first created by – you guessed it – the rich.

Except that the rich generally got that way by inventing all new ways of meeting our needs. As opposed to spending wildly on “government services” (an oxymoron of the first order, unless you’re too young to have been to the DMV….) that thoroughly insult the present, the rich and those who yearn to be rich work to craft an all-new tomorrow.

Which brings us to Musk’s long-ago purchase of a ticket to space on Branson’s Virgin Galactic. He did so back in 2006, which means Musk likely paid somewhere in the range of $250,000 for an eventual flight to space. Some will say Branson cut him a deal since he’s, well, Elon Musk, but then Elon Musk wasn’t Elon Musk back then. He likely paid full price.

As my 2016 book The End of Work makes plain, the rich aren’t just crucial venture capitalists. They’ve also very crucially “venture buyers.” With seemingly endless wealth burning a hole, they can take big risks purchasing goods and services. This is risk mainly because some of what they buy may prove much less than useful, some of it may not improve our health, and some of it may never reach the market to begin with. Rest assured that when Musk purchased a ticket to space from Branson back in 2006, he bought a consumer good that understandably could have wound up wholly unredeemable.

Except that based on Branson’s flight to space last week, it looks like dreams have become reality. Intrepid capital matched with expansive minds has us looking ahead to a future that will in no way resemble the present, and a future that will include cheap space travel after three billionaires reach space, only to signal through their joy what tomorrow’s entrepreneurs need to mass produce.

The only question about the tomorrow in this story is whether or not there will be money to make space travel affordable. This question will be answered more clearly, and to all of our betterment, if the rich are rightly moved to the front of the line to the certain detriment of grasping politicians.

This article, Richard Branson’s Genius and Putting the Rich First, was originally published by the American Institute for Economic Research and appears here with permission. Please support their efforts.