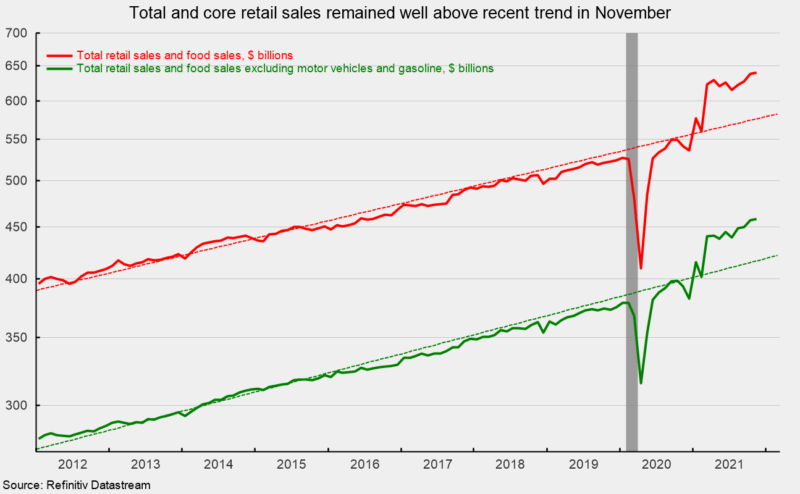 Retail sales and food-services spending rose 0.3 percent in November following a 1.8 percent gain in October.  Retail sales have posted gains in four consecutive months but November is the slowest pace of the four. The increases put total retail sales up 18.2 percent from a year ago and at a new record high; they remain well above the pre-pandemic trend (see first chart).

Core retail sales, which exclude motor vehicle dealers and gasoline retailers, posted a modest 0.2 percent increase for the month, following a gain of 1.6 percent in October, leaving that measure with a 16.5 percent gain from a year ago. Core retail sales are also at a new record high and well above the pre-pandemic trend (see first chart).

Most categories were up in November though breadth was weaker than in October.  Six categories posted gains while five showed declines and two were essentially unchanged. The gains were led by a 1.7 percent increase in gasoline stations, followed by sporting goods, hobby, and bookstore sales (up 1.3 percent) and food and beverage store sales (up 1.3 percent). Gasoline sales often reflect large price movements; the average price for a gallon of gasoline rose 2.8 percent in November. Electronics and appliance store sales led the decliners, down 4.6 percent, while general merchandise store sales fell 1.2 percent and health and personal care stores sales were off 0.6 percent.

While retail sales are running well above the recent eight-year trend, measured as a share of disposable income, retail sales are returning to the range that persisted for much of the 1992 though 2007 period (see third chart). As a share of income, sales were typically in the 35 percent to 38 percent range, well above the 10-year average of 32.3 percent through the end of 2019 (see third chart). This suggests that if the sales share were to stabilize, then retail spending growth should be roughly in line with growth in disposable income. If the share were to fall back to the more recent pattern, then retail spending would slow to a pace below the growth in disposable income.

Furthermore, slowing sales may help the demand/supply imbalance that has been putting upward pressure on prices. Retail inventories have improved for several industries in recent months (see fourth chart). Motor vehicles continue to be the laggard with regard to inventories, coming in at about 63 percent of the December 2019 level. Beyond motor vehicles, only clothing and accessories and department stores show lower inventories relative to December 2019.

Overall, total and core retail sales posted modest gains in November and remain well above recent trends. However, as a share of disposable income, sales are returning back to their 1992 through 2007 range. Retail sales growth may slow over coming quarters, more in line with the rate of growth in disposable income. This could help alleviate upward pressure on prices, particularly if production/supply continues to make gains. The economic outlook is for continued growth and upward pressure on prices is likely to continue for a while longer, but progress towards easing pressures may be accelerating.

This article, Retail Spending Posted a Modest Gain in November, was originally published by the American Institute for Economic Research and appears here with permission. Please support their efforts.