Retail Sales Surged to a Record High in March 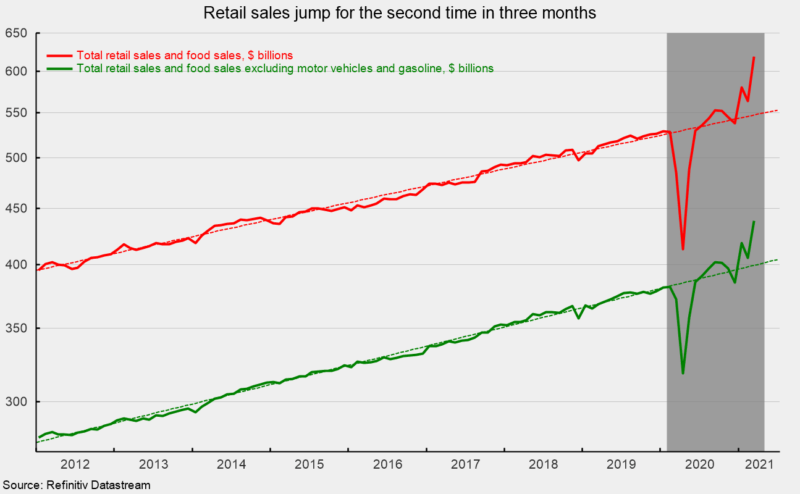 Comparing the first three months to the fourth quarter, total retail sales and food services spending is up 34.7 percent at an annualized rate while core retail sales are up at a 29.5 percent pace. Those results suggest a very strong reading for first quarter gross domestic product.

The gains in March were broad-based across the categories shown in the report. As in January, all thirteen major categories reported a gain in sales (see second chart). The gains were led by a 23.5 percent jump in sporting goods, hobby, musical instruments and book stores sales, followed by an 18.3 percent surge in clothing and accessories store sales, and a 15.1 percent gain in motor vehicles and parts sales (see second chart).

The strong March result provided a strong boost for the overall recovery among the individual categories, as just one of the 13 categories still had sales below their pre-lockdown levels. Restaurants were 5 percent below February 2020 while every other category now had sales above pre-pandemic levels (see third chart).

Overall, retail sales posted a strong gain in March, the second surge in spending in the last three months. The first three months average to a very robust start to the year and suggest that growth in first quarter gross domestic product is likely to be quite vigorous. Combined with the ongoing distribution of vaccines and easing of government restrictions on consumers and businesses, the outlook for the economy is improving significantly. The positive momentum needs to be sustained, but recent data have been clearly favorable.

This article, Retail Sales Surged to a Record High in March, was originally published by the American Institute for Economic Research and appears here with permission. Please support their efforts.