Retail Sales Stall in April, But Remain Well Above Trend 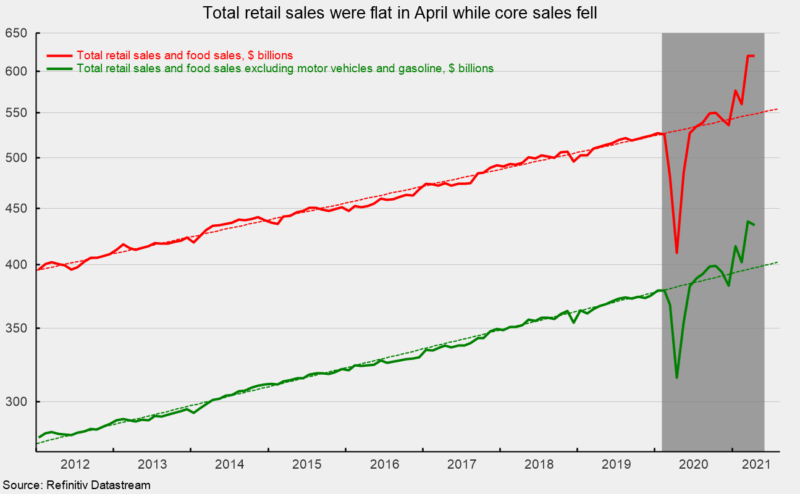 Retail sales and food-services spending were essentially unchanged in April following two strong gains in the prior three months.  The disappointing result in April still leaves retail sales at a record high and well above the most recent nine-year trend (see first chart). From a year ago – during the worst of the government shutdowns – retail sales are up 51.2 percent.

Core retail sales, which exclude motor vehicle dealers and gasoline retailers, posted a 0.8 percent decline for the month, leaving that measure with a 37.6 percent gain from a year ago. Despite the fall, core retail sales are also well above the nine-year trend (see first chart).

Over the last seven months, gains and losses for the various categories of retailers have been quite erratic. The major categories shown in the report had mixed results in April following broad gains in January and March but broad losses in February (see second chart). For April, the gains were led by a 3.0 percent rise for food services and drinking places (restaurants), followed by a 2.9 percent gain in motor vehicles and parts sales, a 1.2 percent gain in electronics and appliances, and a 1.0 percent increase for health and personal care stores (see second chart). Decliners were led by a 5.1 percent loss for clothing and accessories stores, a 4.9 percent decline for general merchandise stores, and a 3.6 percent decrease for Sporting goods, hobby, musical instrument, and bookstores (see second chart).

Overall, retail sales posted a weak result in April, but it follows two strong gains over the prior three months, leaving total and core retail sales well above trend and at or near record highs. Reopening the economy is supporting a rebound for the labor market, personal incomes, and consumer confidence, suggesting the economic outlook remains favorable.

This article, Retail Sales Stall in April, But Remain Well Above Trend, was originally published by the American Institute for Economic Research and appears here with permission. Please support their efforts.

FBI: China Is Behind Past Oil & Gas Pipeline Cyberattacks