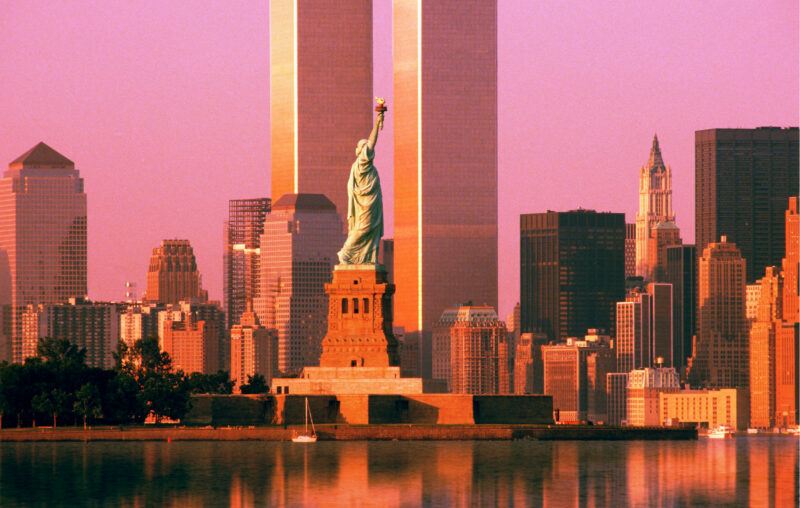 There’s a faded silver cup on my bookshelf. If you look closely at it, a faded imprint reads “eSpeed: We Are Markets.” I received it at a securities industry trade show in the summer of 2001 after a friendly conversation with a gentleman at a booth display. On September 11, 2001, that man and over 650 of his colleagues were murdered, along with thousands of other people.

I’ve dreaded this day for a while now. Two decades is a lot of distance. But the higher the anniversaries number, the stronger my worst memories of my experience at the World Trade Center that day become.

Today, a feeling that has simmered for years will rise to a fever pitch. The nation will honor New York City firefighters, police officers, Port Authority employees, medical personnel and first responders, and military servicemen killed in the Pentagon. There will be some mention of Flight 93 and the passengers who died in Shanksville, Pennsylvania. There will be no shortage of salutes to the soldiers, sailors, airmen, and Marines killed in the global war on terror which, launched in Afghanistan shortly after 9/11, also came to involve action in Iraq, Syria, the Philippines, Mali, Pakistan, Yemen, Libya, Cameroon, Ethiopia, Somalia, Kenya, and other nations.

There’s a reminder that always accompanies these ceremonies: “Never forget.” While understandable, it is untrue to suggest that the aforementioned groups have been neglected. A host of parades, charity events, fundraisers, monuments, and ceremonial namings and renamings have arisen in their honor over the last decade or so. And that is to say nothing of the retail discounts, higher levels of service, and other commercial benefits those groups receive. There are also the informal, unspoken distinctions, like the social reverence that has made a near-imperative out of thanking anyone who has ever worn a uniform in any capacity for any amount of time for their service. (Thirty-something years ago, someone’s military service was more likely to be met with a “Couldn’t afford college?” quip than fawning appreciation.) This writing has nothing to do with those people––however honorable they may be––nor the accolades afforded them.

Instead, I write this to celebrate the truly forgotten. There are no elegies for them; no concerts, flags, or bumper stickers. The closest thing they have to monuments are the random sections of beams from the Twin Towers that were distributed to town and county parks nationwide after the attacks.

Those beams, twisted and deformed, once supported floors. And 20 years ago today, at about the time that this article is published (8 a.m. Eastern), those floors were already alive with the footsteps of traders, brokers, portfolio managers, accountants, tech workers, customer service representatives, and administrative personnel engaged in the lifeblood of global commerce: finance.

It can be easy to forget the people who were actually targeted in the World Trade Center attacks. It’s increasingly customary to do so, in fact. Many Americans link intrinsic value with visible toil. Individuals dealing in financial markets, negotiating transactions, and managing great amounts of capital are often assumed to be wealthy, corrupt, or engaged in elaborate and ultimately unproductive activity, or some combination of the three. None of those labels invite much sympathy––even considering the horrors that so many people in these scrutinized fields faced on that day.

Nationwide, on this 20th anniversary of September 11, 2001, more will be said about military service dogs than the thousands of hardworking, productive people killed in downtown Manhattan that day.

Some argue that the Twin Towers were targeted because of their prominence; they were among the most recognizable man-made structures on Earth. Others maintain that, going back to the 1993 truck bomb attempt, the two towers represented the best “bang-for-the-buck” opportunity for saboteurs to inflict massive casualties with minimal effort. But the prevailing explanation for the repeated attempts to assault and destroy the World Trade Center complex, which could easily engulf the nearby New York Board of Trade, New York Mercantile Exchange, and New York Stock Exchange, is its tremendous economic significance. It was a choice lucidly indicating that America’s attackers understood more about the roots of American prosperity and the wellspring of human prosperity than most Americans do.

What tens of thousands of men and women in the North and South towers of the World Trade Center did all day, every day, was not simply “pushing pieces of paper around.” They were not opportunistic, cleverly-positioned middlemen. Their work did not simply create inconsequential, flashing numbers on computer terminals. What they did was nothing less than lay the foundation upon which the modern world sits and functions.

For time immemorial, human beings have struggled to determine the best means of producing goods and services. At one time, that effort centered on crafting spears and shelters; today, it focuses on such ends as nanotechnology and selecting composites for space travel. Among competing means of production, regardless of the proposed output, there is some combination of inputs and processes that is the most economically efficient. Only prices, generated in market exchange, fulfill that calculation function adequately. Those prices, by reflecting the current consensus valuation of producers and consumers, allow planning. They send signals to all other market participants regarding scarcity, abundance, and shifts in the overall appraisal of countless resources.

Prices are also the means through which profitability is determined. Today, profitability is increasingly treated as a profane term and concept, but there are no other means of adequately determining where and how resources are being combined into the most customer-satisfying goods or services. Profits draw in competition, which results in the amazing diversity of products available in market economies.

Market-derived prices affect billions of people. They do not, and could not, come from governments. Only seasoned financial professionals, employing knowledge and experience from trading, designing transactions, or advising on business deals can discover prices. They frequently assume risk on behalf of strangers, bring together far-flung counterparties, and smooth out otherwise “lumpy” flows of money and capital in ways that make the completion of long-term projects possible. The coordination of the numerous stages of producing complex goods, the funding of innovation, and the transfer of risk via hedging or synthetic products would not be possible without modern finance.

William N. Goetzmann, professor and director of the International Center for Finance at Yale University, puts the birth of financial concepts at the root of civilization itself, crediting it with the early development of language and the apprehension of time beyond the crude demarcations of seasons or lunar cycles. Financial practices, building off of the social technology of money and private property rights, forged and continue to govern virtually our entire world. But those practices are not automated, which is why financial professionals ranging from asset managers and speculators to algorithmic developers, accountants, and clerical personnel are so critical.

The tablet or monitor you are reading this on, the house or building you are doing so in, and the furniture, appliances, and vehicles you might happen to own would either not exist, or would be far more expensive, without the institutions and practices of finance. It is to economics what engineering is to physics and chemistry.

Money and finance are the font and essence of modernity.

And so, 20 years after one of the most awful days of my and countless others’ lives, I honor and praise the memory of the people who worked in the World Trade Center. I honor those who were slaughtered that sunny, blue, and virtually cloudless Tuesday morning. When they perished, most of them were still at their desks, donning headsets or handling phones, squawking our arcane language of growth and prosperity. I remember those who were injured, and those who escaped unharmed, but were by no means unaffected.

To the 12 or 13 dealers, traders, brokers, and other individuals based in the towers with whom I transacted and developed a rapport for years, who were gone in a flash: I remain grateful for your service, skills, and friendship.

To my friend B, killed 20 years ago today, enduring esteem.

I was privileged to work with and among all of you. Many of the things I learned from you set me on the path I am on today. None of you are forgotten, nor will I let you be.

This article, Remembering the Truly Forgotten, Twenty Years Later, was originally published by the American Institute for Economic Research and appears here with permission. Please support their efforts.