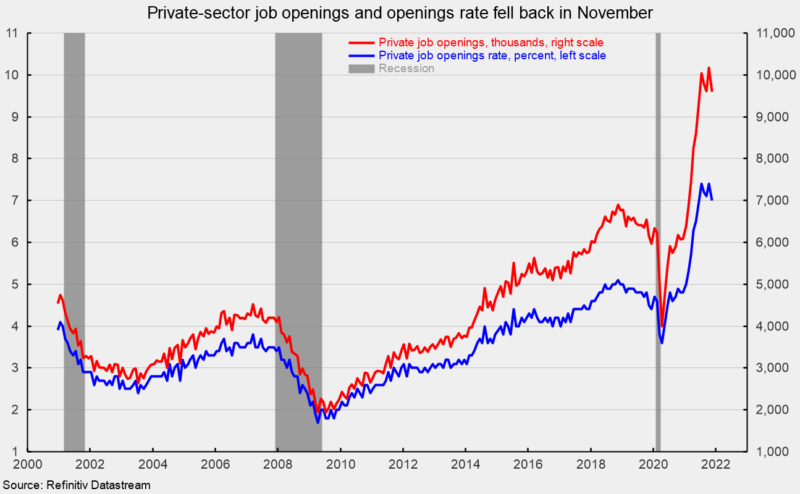 The total job openings rate, openings divided by the sum of jobs plus openings, dropped to 6.6 percent in November from 7.0 percent in October while the private-sector job-openings rate fell to 7.0 percent from a record-high 7.4 percent (see first chart).

Three industry categories still have more than 1.5 million openings each: education and health care (1.970 million), trade, transportation, and utilities (1.955 million), and professional and business services (1.801 million). Leisure and hospitality dropped below the 1.5 million mark in November, coming in at 1.482 million.

The number of private-sector quits jumped to a record 4.311 million, up from 3.945 million in October. Leisure and hospitality led with 1.002 million quits followed by trade, transportation, and utilities with 996,000 quits, and professional and business services with 798,000.

The quits rates among the private-sector industry groups is still dominated by leisure and hospitality with a rate of 6.4 percent, well ahead of the number two, professional and business services, with a 3.7 percent rate, and number three, trade transportation, and utilities, with a 3.6 percent quits rate. All the major groups within private-sector quits rates remain above the average over 2001 through 2019 (see third chart).

From the worker perspective, labor market conditions eased slightly but remained very favorable in November. The number of openings per job seeker (unemployed plus those not in the labor force but who want a job) fell to 0.778 in November from a record-high 0.860 in October. Prior to the recession, the high was 0.721 in November 2019 (see fourth chart).

Today’s job openings data continue to suggest a very tight labor market. The tight labor market is leading to significant turnover among employees. The outlook for the economy is for continued growth but difficulty hiring and retaining employees is likely to remain a challenge for employers. Enticing people back into the workforce could help ease supply problems and reduce upward pressure on prices.

This article, Private-Sector Job Openings Fell in November but Quits Surged, was originally published by the American Institute for Economic Research and appears here with permission. Please support their efforts.