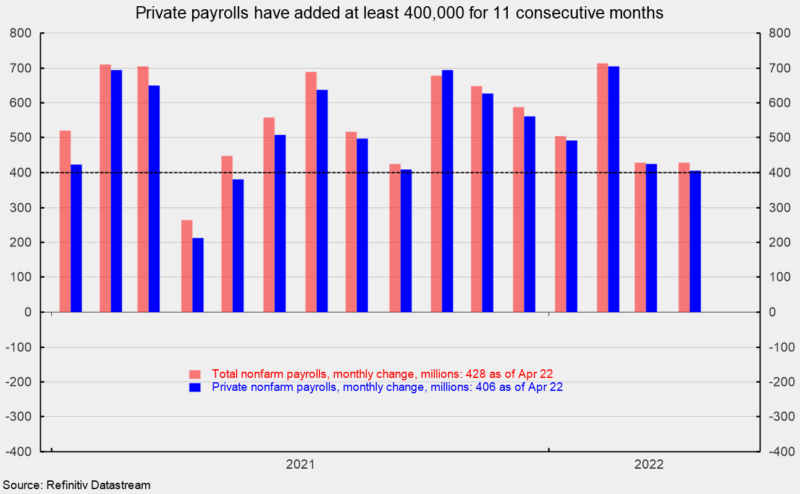 Average hourly earnings rose 0.3 percent in April, putting the 12-month gain at 5.5 percent. The average hourly earnings for production and nonsupervisory workers rose 0.4 percent for the month and are up 6.4 percent from a year ago. The average workweek for all workers was unchanged at 34.6 hours in April while the average workweek for production and nonsupervisory held at 34.1 hours.

Combining payrolls with hourly earnings and hours worked, the index of aggregate weekly payrolls for all workers gained 0.6 percent in April and is up 10.0 percent from a year ago; the index for production and nonsupervisory workers rose 0.7 percent and is 11.2 percent above the year ago level. The total number of officially unemployed was 5.941 million in April. The unemployment rate was unchanged at 3.6 percent while the underemployed rate, referred to as the U-6 rate, rose 0.1 percentage points to 7.0 percent in April. In February 2020, the unemployment rate was 3.5 percent while the underemployment rate was 7.0 percent.

The employment-to-population ratio, one of AIER’s Roughly Coincident indicators, came in at 60.0 percent for April, down 0.1 percentage point and still significantly below the 61.2 percent in February 2020. Similarly, the labor force participation rate ticked down 0.1 percentage point in April, falling to 62.2 percent, well below the 63.4 percent of February 2020 (see fifth chart). The lower participation rate translates into a deficit of more than 3 million people from the labor force.

The weaker participation rate is one reason the labor market remains so tight. Based on the latest Job Openings and Labor Turnover Survey (JOLTS), there is a record low 1.03 available workers for each opening (see sixth chart). That shortage is likely to continue driving wages higher.

Upward price pressures have resulted in a new, somewhat aggressive cycle of Fed policy tightening, raising the risk of a policy mistake. Furthermore, the Russian invasion of Ukraine and renewed lockdowns in China may be further distorting global supply chains leading to further disruptions to businesses.  The outlook remains highly uncertain, and caution is warranted.

This article, Private Payrolls Add 406,000 Jobs in April, was originally published by the American Institute for Economic Research and appears here with permission. Please support their efforts.