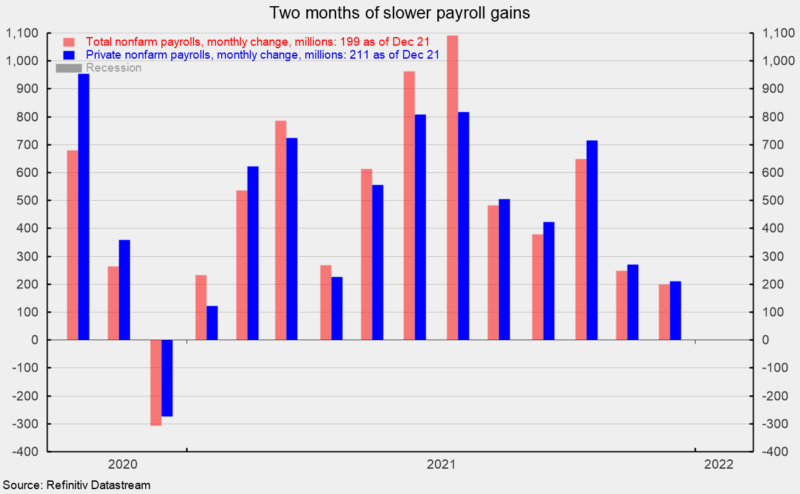 U.S. nonfarm payrolls added 199,000 jobs in December, another disappointing result. The gain follows upwardly revised additions of 249,000 in November and 648,000 in October. The December increase is the 12th in a row and 19th in the last 20 months. However, monthly gains have been decelerating over the last several months, posting slower gains in four of the last five months (see first chart).

Private payrolls posted a 211,000 gain in December after a 270,000 increase in November and a 714,000 addition in October. Both months were revised up from their original estimates. The December rise in private payrolls is also the 12th in a row and 19th in the last 20 months. However, gains in the private sector have also been slowing over the last several months (see first chart).

The recovery in payroll employment continues to be erratic, with recent months showing a clear slowing trend. While the average gain over the last six months is still ahead of the six months ending in April 2021, the slowing growth is a concern given that payrolls remain well below pre-pandemic levels. The recent surge of new Covid cases may be partially responsible for the weaker performance over the last month or two. Furthermore, a significant number of older workers have left the workforce since the start of the pandemic, leaving the labor market very tight and pushing the unemployment rate down sharply. Faster employment growth will be critical in expanding production and reducing upward pressure on prices.

While the pace of gain has varied over the last 12 months, gains have been generally broad-based. However, slower growth over the last two months was also widespread (see second chart). Within the 211,000 gain in private payrolls, private services added just 157,000 versus a 12-month average of 452,000 while goods-producing industries added 54,000 versus a 12-month average of 47,000.

After 20 months of recovery, only two of the major private industry groups have more employees than before the government lockdowns – transportation and warehousing is 3.7 percent above the February 2020 level and financial activities is 0.5 percent above. Leisure and hospitality (-7.2 percent) is still more than 5 percent below its pre-pandemic level while mining and natural resources (-4.9 percent) is just under the five percent threshold. Progress towards full recovery has been slow over the last few months (see third chart).

The average workweek was unchanged at 34.7 hours in December. Combining payrolls with hourly earnings and hours worked, the index of aggregate weekly payrolls gained 0.8 percent in December. The index is up 9.9 percent from a year ago.

The total number of officially unemployed fell to 6.319 million, a drop of 483,000. The unemployment rate fell to 3.9 percent while the underemployed rate, referred to as the U-6 rate, fell to 7.3 percent in December. In February 2020, the unemployment rate was 3.5 percent while the underemployment rate was 7.0 percent (see top of fourth chart). The better progress on achieving the pre-pandemic unemployment rate is largely due to people dropping out of the labor force, especially in the 55 and over age cohort. Approximately 698,000 workers over age 55 have dropped out of the labor force over the last two years versus an increase of approximately 2 million for the 24 months through December 2019.

The overall participation rate was unchanged in December, coming in at 61.9 percent versus a participation rate of 63.3 percent in February 2020. The employment-to-population ratio, one of AIER’s Roughly Coincident indicators, came in at 59.5 for December, up from 59.3 in November but still significantly below the 61.1 percent in February 2020 (see bottom of fourth chart).

The December jobs report shows total nonfarm payrolls posted another disappointing gain. Private payrolls were slightly better, but both were significantly below their 12-month average gain and below expectations. It is possible that the recent wave of new Covid cases and a scarcity of potential workers are preventing a faster recovery in payroll employment.

Difficulty in hiring is likely to prolong the ongoing materials shortages, production constraints, and logistical and transportation bottlenecks that are sustaining significant upward pressure on prices. Overall, the outlook is for continued recovery; however, as waves of new Covid cases hamper efforts to hire and increase production, upward price pressures are likely to continue for a while longer.

This article, Payrolls Recovery Remained Subdued in December, was originally published by the American Institute for Economic Research and appears here with permission. Please support their efforts.