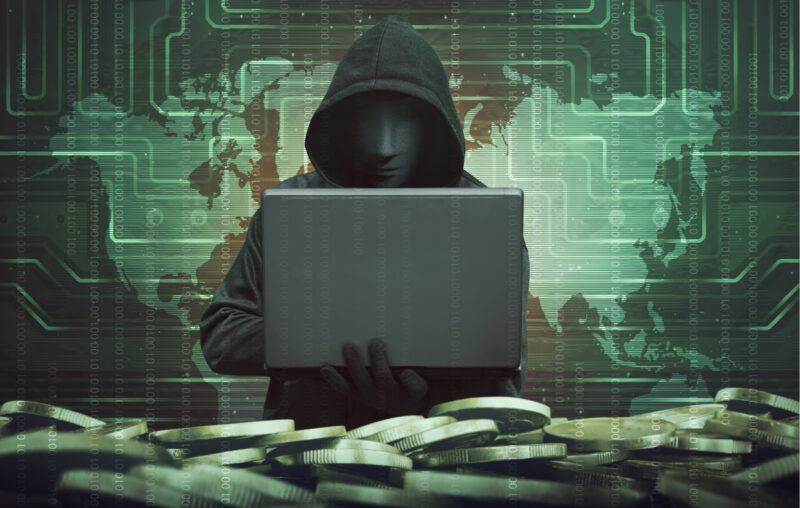 Milton Friedman famously explained that this is why they largely don’t care about how much money is spent or how effectively it is spent.

No wonder government programs, agencies, and departments waste so much money, year after year, decade after decade.

I’ve repeatedly written about the perverse impact of unemployment benefits that are so excessive that people have big incentives not to work.

But that’s just one problem with that program. Axios has a depressing report on how the turbo-charged benefits that were part of the coronavirus legislation triggered staggering levels of fraud.

Criminals may have stolen as much as half of the unemployment benefits the U.S. has been pumping out over the past year, some experts say. …fraud during the pandemic could easily reach $400 billion, according to some estimates, and the bulk of the money likely ended in the hands of foreign crime syndicates… Blake Hall, CEO of ID.me, a service that tries to prevent this kind of fraud, tells Axios that…50% of all unemployment monies might have been stolen… Haywood Talcove, the CEO of LexisNexis Risk Solutions, estimates that at least 70% of the money stolen by impostors ultimately left the country, much of it ending up in the hands of criminal syndicates in China, Nigeria, Russia and elsewhere.

USA Today reported on one Nigerian scammer who feasted on American tax dollars.

Mayowa is an engineering student in Nigeria who estimates he’s made about $50,000 since the pandemic began. After compiling a list of real people, he turns to databases of hacked information that charge $2 in cryptocurrency to link that name to a date of birth and Social Security number. In most states that information is all it takes to file for unemployment. …“Once we have that information, it’s over,” Mayowa said. “It’s easy money.” …prepaid debit cards issued by some state unemployment offices paved the way for fraud this year, security experts said. …Asked whether he feels bad about stealing from unemployed Americans, Mayowa pointed out that 70% of his peers in school are working the scams as side hustles, too.

But it’s not just the unemployment benefits.

The government also has been sending out “stimulus” checks to people, even if they were employed all during the pandemic.

And they didn’t even need to be alive, according to a report from CNS.

The federal government sent nearly 1.2 million “economic impact payments” authorized by the Coronavirus Aid, Relief, and Economic Security (CARES) Act to people who were dead and, therefore, not qualified to receive them, according to a report published today by the Government Accountability Office. …On its website, the IRS describes individuals who are not eligible for an “Economic Impact Payment”… “Taxpayers likely won’t qualify for an Economic Impact Payment if any of the following apply: … You can be claimed a dependent on someone else’s return. … You are a nonresident alien. … An incarcerated individual. A deceased individual.”

Hundreds of foreigners also got handouts, as reported by the Washington Post.

Hundreds of people have cashed U.S. stimulus checks at Austrian banks in recent months. Some of them appeared puzzled by the unexpected payments or were ineligible for the payouts, according to bank officials and Austrian media reports. …He and his wife received $1,200 each, although neither is a U.S. resident or holds U.S. citizenship — key eligibility requirements. …Similar instances have been reported in other countries.

By the way, it’s not just Austrians who received handouts. NPR has a story featuring people all over the world who got $1200 checks from Uncle Sam.

And let’s not forget the PPP program, which was another big chunk of the coronavirus handouts.

The Wall Street Journal has a report on the rampant fraud in that program.

The federal government is swamped with reports of potential fraud in the Paycheck Protection Program, according to government officials and public data…the government allowed companies to self-certify that they needed the funds, with little vetting. The Small Business Administration’s inspector general, an arm of the agency that administers the PPP, said last month there were “strong indicators of widespread potential abuse and fraud in the PPP.” …The watchdog counted tens of thousands of companies that received PPP loans for which they appear to have been ineligible, such as corporations created after the pandemic began… Given the limited criteria Congress set for the program, he said, “The scandal is what’s legal, not what’s illegal.”

Reason also has a story about PPP waste.

…carmaker Lamborghini has benefitted from the Paycheck Protection Program (PPP)… Within days of receiving $1.6 million in PPP loans for his construction and logistics businesses, Lee Price III of Houston bought himself a 2019 Lamborghini Urus for $233,337, plus a $14,000 Rolex watch and close to $5,000 worth of entertainment at a strip club and various bars around town. …His scheme was audacious but hardly original. The DOJ had already brought similar fraud charges against Miami man David T. Hines, who had allegedly spent his ill-gotten PPP loans on a new $318,000 Lamborghini Huracán EVO. …Loan recipients include companies founded by members of Congress and prominent D.C. lobbying firms. Presidential adviser Jared Kushner’s family businesses, including their media and real estate concerns, received PPP loans, as did the clothing brand of rapper and aspiring president Kanye West.

We already knew that the coronavirus pandemic resulted in a bigger burden of government.

None of us should be surprised that we also wound up with record levels of waste.

Remember, “more government” is not the answer to any sensible question.

At some point, we will run out of “other people’s money.”

This article, Pandemic Emergency Spending Riddled With Fraud, was originally published by the American Institute for Economic Research and appears here with permission. Please support their efforts.