Packing Away the Constitution 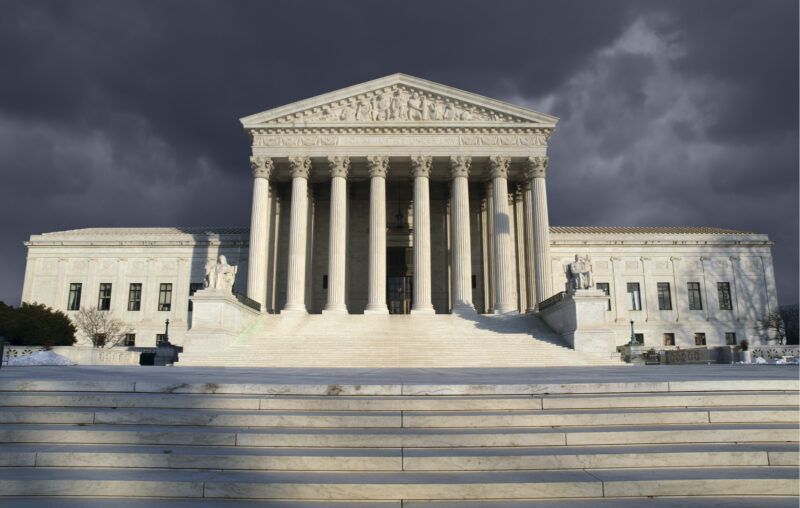 Packing the Supreme Court, not on anyone’s front burner when Barack Obama was President, sharply moved in that direction after Donald Trump was elected. Now with Joe Biden in office but facing a Court not likely to rubber-stamp his or Democratic legislative proposals, we’re back at it. And the potential for the Court to reconsider its Roe v. Wade precedent has supercharged court-packing support. A good illustration comes from Michael Hiltzik in the Los Angeles Times. He goes to great lengths to support the idea, but never once mentions fidelity to the Constitution as a criterion.

Adding justices is a possibility, since the Constitution does not specify the number of Justices. The current total derives from the Judiciary Reform Act of 1869, so all it would take is a change in that law. But if you understand that the limits the Constitution was designed to place on federal overreaching are important, it is foolish, since not respecting those limits is the clear goal of court-packing proponents. As Ezra Levin said of Democratic presidential candidates in 2019, “Any Democratic presidential candidate who is serious about implementing a progressive agenda has to seriously consider appointing new justices to unpack the courts.”

Such a purpose for court packing could hardly contrast more sharply with perhaps the most cited authority on the intended constitutional role of the courts, Alexander Hamilton’s Federalist 78:

“The judiciary…can take no active resolution whatever. It may truly be said to have neither force nor will but merely judgment.” Consequently, “The judiciary, from the nature of its functions, will always be the least dangerous to the political rights of the Constitution; because the least in a capacity to annoy or injure them.”

In other words, Hamilton in Federalist 78 argues that courts are empowered only to do what seems diametrically opposed to court packers’ goals:

The main purpose of the Court was “to be an intermediate body between the people and the legislature…to keep the latter within the limits assigned to their authority.” That protective function requires that “Where the will of the legislature, declared in its statues, stands in opposition to that of the people, declared in the Constitution, the judges ought to be governed by the latter rather than the former.” In other words, “it will be the duty of the judicial tribunals to…guard the Constitution and the rights of individuals,” to make sure that “No legislative act, therefore, contrary to the Constitution can be valid. To deny this would be to affirm…that men acting by virtue of powers may do not only what their powers do not authorize, but what they forbid.”

The purpose of remaking the courts into a Democratic Party adjunct would eliminate their role as a crucial balance wheel in the separation of powers, but Hamilton in Federalist 78 warned in no uncertain terms how serious it would be. “Liberty can have nothing to fear from the judiciary alone, but would have everything to fear from its union with either of the other departments.”

Anti-Federalists, who feared that the Constitution’s checks would be undermined by expansive court interpretations, enabling a federal government with unwarranted and undelegated powers, which led to the adoption of the Bill of Rights, said it even more strongly.

As Brutus put it, rather than relying on constitutional grounds for rulings, the Court would create them “by their own decisions,” through manipulating the meanings of vague clauses. It would adopt “very liberal” principles of interpretation, extremely perilous for a nation founded on the consent of the governed. It could easily invent “creative” rulings which would be backed with “the force of law.”

Current court-packing proposals stand sharply at odds with America’s Founders. Proponents advocate violating the clearest statement in the Federalist Papers on the role of the courts. They would justify an “I told you so” from Anti-Federalists. And it is worth noting that both sides of the constitutional ratification debates rejected the purposes Democratic and progressive court packers have in mind. If the vision that formed our country is to be consulted at all, court packing that would undermine the Supreme Court’s central role is a bad idea.

That is why court packing proponents play up claims that the Court needs such a change to maintain its credibility with “the will of the people,” while ignoring the central issue of fidelity to the Constitution. They want what partisans on the left are in favor of today to override Constitutional limits.

However, Constitutional law is supposed to be different from other types of law. In common law, later rulings carry more precedential weight than earlier rulings, as a way of maintaining the continuity of people’s legitimate expectations. Similarly, later legislation can change earlier laws. But the Constitution is supposed to remain “the supreme law of the land.” Later deviations are not to create new precedents that effectively rewrite the Constitution.

However, the progressive “living Constitution” approach has turned Federalist 78 on its head. Divergent precedents are substituted for the Constitution, which effectively become the “new and improved” highest law of the land. Roe v. Wade, the apparent trigger for the latest spike in court packing proposals, is a case in point, relying on questionable penumbras and emanations to create a right not enumerated in the Constitution.

Desmond Caulfield put this point very clearly and succinctly in his “Privacy, Penumbra, and Emanations” letter to the Washington Post almost 30 years ago. It deserves careful attention:

[The] description of abortion as a “fundamental right…is not supported by an examination of the provenance of the easy access to abortion now available in the United States. To the contrary, the facts reveal this “right” to be little more than an intellectually clumsy contrivance of the Supreme Court and an astonishing display of judicial arrogance.

Writing for the majority in Griswold v. Connecticut (1965), a case unrelated to abortion, Justice William O. Douglas understandably found he was unable to cite a generalized right to privacy in the Constitution itself. Undeterred, he went on to discover a “penumbra” (from the Latin paene umbra, meaning “almost a shadow”) formed, he said, by unspecified “emanations” from the Bill of Rights. Justice Douglas then placed within this extra-constitutional near-shadow a hitherto unknown “zone of privacy,” which was transformed into a “right of privacy” by the simple device of the court’s substitution of the term “right” for “zone” in its later decisions.

How this mysterious trinity of privacy, penumbra and emanations had eluded legal scholars for the then 176 years of our constitutional history was (and is) a question left unaddressed by the court.

Nevertheless, by 1973, its own legal sleight of hand enabled the court in Roe v. Wade to cite a “line of decisions” that had established a generalized right to privacy and that had, without further explication, become “broad enough” to include a virtually unrestricted right to abortion.

Rather than revealing any respect for the Constitution as originally written or understood, those who like such results subsequently try to cement them in place by demanding allegiance to those precedents from then on. But rather than stating things so baldly, they claim adherence to the principle of stare decisis (Latin for “to stand by things decided”), which means the Courts should adhere to its own precedents they like (as with Roe v. Wade). Of course, it is when the precedent they like is at variance with the Constitution that they roll out stare decisis claims.

That is why the distinction between the role of precedents in constitutional law and other types of law is critical. Should we be faithful to the Constitution, and the sharply limited federal government of enumerated powers it created, as the earlier, controlling precedent, or should we accept precedents that have already warped it almost beyond recognition? After all, if the meaning of the Constitution can easily be changed by innovative judicial interpretations, rather than the difficult process spelled out to implement Constitutional changes, then it cannot be the highest law of the land in practice.

Further, if the Supreme Court must defer to earlier precedents out of adherence to stare decisis, there is no respectable defense for those activist rulings liberals are now so desperate to defend, since they clearly deviated from earlier constitutional precedents.

Principled interpreters of the Constitution do not advocate overturning valid Constitutional precedents, but precedents that deviated from it, as the only way to maintain it as the “highest law of the land” in fact, as well as on paper. Court packers want to demote it to preserve every precedent they like that was not derived from the Constitution. But that would put all our Constitutional rights at risk, because as Hamilton wrote, “Without this, all the reservations of particular rights or privileges would amount to nothing.”

This article, Packing Away the Constitution, was originally published by the American Institute for Economic Research and appears here with permission. Please support their efforts.