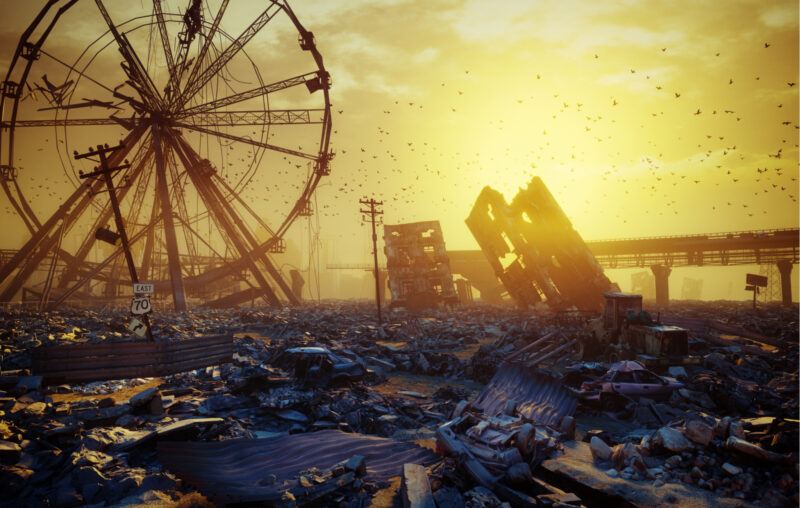 Before you choose between traveling down tracks A or B, you’re told that, regardless of which set of tracks you choose, from the moment you start your journey you’ll gather ever more information about which specific destination you are headed toward.

Down which of these two sets of tracks will you choose to begin your journey?

If you’re someone who relishes risk-taking, you might choose track A with its higher chance of depositing you in a veritable earthly paradise. But if you’re even remotely averse to risk, you’ll almost certainly choose to start your journey on track B. The opportunity afforded by track B (unlike track A) to switch mid-journey to another track – to track C – allows you to act on valuable information that you’ll learn as you journey forth.

I’m quite confident (although I can’t prove) that most human beings would choose to begin their journey on track B rather than on track A. It’s desirable to retain the ability to adjust course as we learn more about just where we are heading on our current course. Indeed, I think it’s not too much to describe people who would choose to start their journey on track A rather than on track B as reckless fools.

Yet by giving unprecedented powers to government to impose one-size-and-style-fits-all Covid lockdowns and other restrictions and mandates, humanity chose a route much more akin to track A than to track B. The reason is that government officials are unusually reluctant to notice their errors, to admit their errors, and to make mid-course adjustments in their chosen policies.

Private individuals, households, and firms err frequently. But they also have strong incentives to minimize their chances of erring, to recognize and admit their errors, and to change their course as soon as errors are recognized. A restaurant, for example, that learns that customers do not like its new menu item enough to pay sufficient amounts to cover the cost of supplying that item will remove that item from its menu as soon as the mistake is noticed. And it will do so even if the restaurant owner or the chef is especially fond of eating or preparing that particular dish.

When in our private capacities we persist in error we persist in suffering avoidable harm. As a consequence, few of us persist in any error once we learn of it.

The reasons government officials respond to their errors very differently than do individuals acting in private capacities are several. One reason is that the ill effects of errors committed by government officials are seldom concentrated on the officials who commit the errors but are, instead, borne mostly by the population at large. A member of Congress who today votes for a project that wastes $1 billion of taxpayer money each year pays only $3 annually for this error. The remaining $999,999,997 is spread out to be borne by the other 330 million Americans. The small personal cost of this error gives this politician little incentive even to notice his or her mistake. And even if the mistake is noticed, if the cost to the politician of reversing course is more than $3 annually, that politician has strong incentives to let the mistaken program continue.

Unfortunately, unlike in the private sector, the costs borne by political decision makers of abandoning mistaken courses of action are often inflated. Politicians win elections too often by presenting themselves to the public as miracle workers – as transcendent visionaries possessing an almost godlike affection for the citizenry matched by an equally remarkable ability to achieve outcomes that are not only glorious, but unachievable by any other candidate for his or her office.

Godlike creatures seldom, if ever, err. And so if a chosen policy appears today not to be working as the politician promised, the fault cannot possibly be with the politician who chose it or with the chosen policy itself. The fault must lie elsewhere. Perhaps the policy, because of the compromises demanded by party politics, isn’t being pursued with sufficient purity or vigor. The solution, in this case, is to press the policy further and harder. To abandon the policy, or even to scale it back, would be to admit that the politician is an ordinary mortal, one who is perhaps no more fit to exercise power than is any person randomly plucked off the street.

Or perhaps the policy’s splendid benefits simply take a bit more time to materialize than was originally thought. “Press on! Don’t quit now! Trust me,” pleads the politician, “for I am a uniquely caring and gifted leader! I know what’s best for you!”

No matter how misguided the policy’s outcomes appear to be, society’s great complexity supplies cover for the politician who supports the policy. “Imagine how much worse things would be if my policy weren’t in place!” is always available as cover. “We can’t quit now!”

Ironically, the bigger the public policy error, the more reluctant politicians become to admit making a mistake and reversing course. If the Covid lockdowns had destroyed only a handful of jobs, inflicted only a tiny bit of inconvenience, and cost just a few million dollars in taxpayer funds, then admitting error by reversing course would be to admit to having been responsible for imposing on society only a small cost. Voters might well forgive such a minor faux pas.

So largely because lockdowns and other public policy responses were so calamitous, the politicians and bureaucrats who supported these responses have no incentive to admit the error of their ways. And because reversing course would be such an admission, no reversals occur. Lockdowns and other restrictions might be allowed to die according to their preannounced dates, but not before. Further, when in the future there arise threats similar to the one that sparked the lockdowns, officials who supported the original lockdowns will feel strong pressure to support renewed lockdowns. If they don’t, they risk admitting to the public that their earlier decision – one that was extraordinarily costly – was a terrible mistake. And godlike creatures don’t make mistakes.

I fear that humanity’s response to Covid has put us on a terrible track, one destined to deposit us all in a horrific place.

This article, On Track for Calamitous Policy Outcomes, was originally published by the American Institute for Economic Research and appears here with permission. Please support their efforts.

What Does A Recession Mean For Me? And What Are The Best Places To Invest Money Right Now?

Mortgage Rates Are Closing In On 7%, Signaling Risk Of House Price Declines