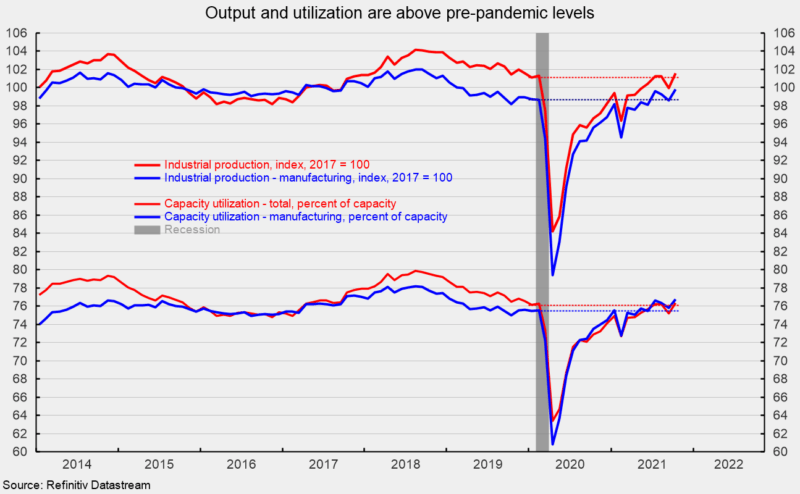 Industrial production rose a robust 1.6 percent in October, recovering from a sharp decline in September. The gain pushed total output back above the January 2020 level (see first chart). Over the past year, total industrial output is still up 5.1 percent. Much of the rebound in October was related to the fading effects of Hurricane Ida (about half the monthly gain) which had shut down significant portions of activity in the coastal region along the Gulf of Mexico, especially for the energy industry.

Capacity utilization increased 1.2 points to 76.4 percent from 75.2 percent in September and is slightly above the January 2020 level of 76.1 percent. Total capacity utilization remains well below the long-term (1972 through 2020) average of 79.6 percent (see first chart).

Manufacturing output – about 76 percent of total output – posted a 1.2 percent increase for the month, following back-to-back drops in August and September (see first chart). Manufacturing output is 1.1 percent above its January 2020 level (see first chart) and is up 4.5 percent from a year ago. A significant portion (about half) of the October gain was due to a rebound in motor vehicle production.

Mining output accounts for about 12 percent of total industrial output and posted a sharp 4.1 percent increase last month (see top of second chart). Over the last 12 months, mining output is up 11.8 percent. The fading effects of Hurricane Ida was the primary reason for the increase in mining activity.

Utility output, which is typically related to weather patterns and is also about 12 percent of total industrial output, increased 1.2 percent for the month (see top of second chart). From a year ago, utility output is up 3.0 percent.

Among the key segments of industrial output, energy production (about 25 percent of total output) rose 3.3 percent for the month (see bottom of second chart) with gains in all five components. Total energy production is up 8.9 percent from a year ago.

Motor-vehicle production (about 5 percent of total output), one of the hardest-hit industries during the lockdowns, continues to be volatile as the industry struggles with a semiconductor chip shortage. Motor-vehicle production jumped 11.0 percent in October following a 7.1 percent drop in September and a 3.0 percent fall in August; down in three of the last five months (see bottom of second chart). From a year ago, vehicle production is still off 3.6 percent. Total vehicle assemblies rose to 9.10 million at a seasonally-adjusted annual rate. That consists of 8.83 million light vehicles and 0.27 million heavy trucks. Within light vehicles, light trucks were 7.40 million while cars were 1.43 million.

The selected high-tech industries index rose 1.3 percent in October (see bottom of second chart) and is up 11.0 percent versus a year ago. High-tech industries account for just 2.2 percent of total industrial output but remain one of the fastest growing areas.

All other industries combined (total excluding energy, high-tech, and motor vehicles; about 68 percent of total industrial output) fell 0.4 percent in October (see bottom of second chart) and are 4.3 percent above October 2020.

Industrial output showed broad weakness in September, hurt by the lingering effects of Covid that has resulted in shortages of materials, and the lingering effects of Hurricane Ida that hit the energy industry particularly hard. October benefited from the fading of the effects from Ida and a solid rebound in the motor vehicle industry. While ongoing difficulties with labor, logistics, and materials shortages continue to be challenges for many industries especially in manufacturing, some of these issues may start to ease in the coming months and quarters, helping to reduce some of the upward pressure on prices.