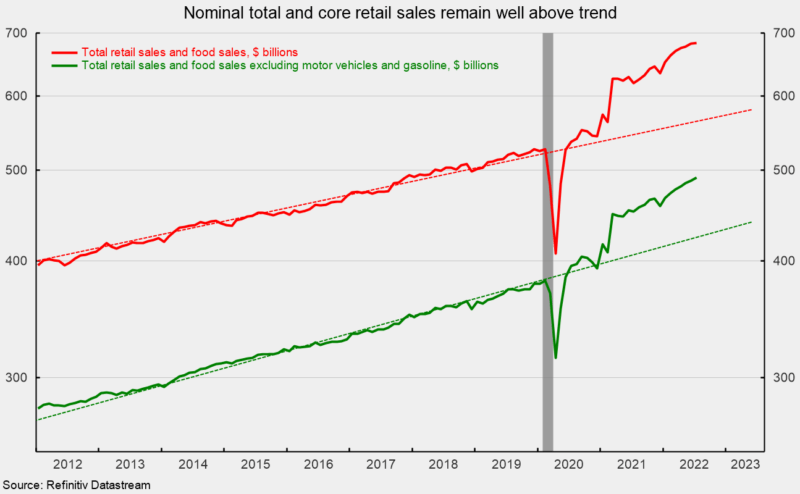 Total nominal retail sales and food-services spending were unchanged in July following an 0.8 percent increase in June. From a year ago, retail sales are up 10.3 percent and remain well above the pre-pandemic trend (see first chart).

Categories were generally higher in nominal terms for the month with nine up and four down in July (see fourth chart). The gains were led by nonstore retailers, up 2.7 percent for the month, followed by building materials, gardening equipment and supplies (1.5 percent), and miscellaneous retailers (1.5 percent).

Gasoline spending led the decliners with a 1.8 percent drop. However, the average price for a gallon of gasoline was $4.77, down 7.4 percent from $5.15 in June, suggesting price changes more than accounted for the drop. Other declines came in motor vehicles and parts dealers (-1.6 percent), general merchandise retailers (-0.7 percent), and clothing and accessory stores (-0.6 percent).

Overall, nominal total and core retail sales remain well above trend. However, rising prices are still providing a significant boost to the numbers. In real terms, total retail sales were essentially unchanged and have been trending flat since March 2021. Real core retail sales posted a solid gain for the month and appear to have a modest upward trend.

Sustained upward pressure on prices is likely affecting consumer attitudes and spending patterns. As more and more consumers feel the impact of inflation, real consumer spending may come under pressure. Furthermore, an intensifying Fed tightening cycle may lead to significant demand destruction. Both phenomena raise risks for the economic outlook. In addition, the fallout from the Russian invasion of Ukraine and waves of lockdowns in China remain threats to economic expansion. The outlook is highly uncertain. Caution is warranted.

This article, Nominal and Real Core Retail Sales Increase in July, was originally published by the American Institute for Economic Research and appears here with permission. Please support their efforts.