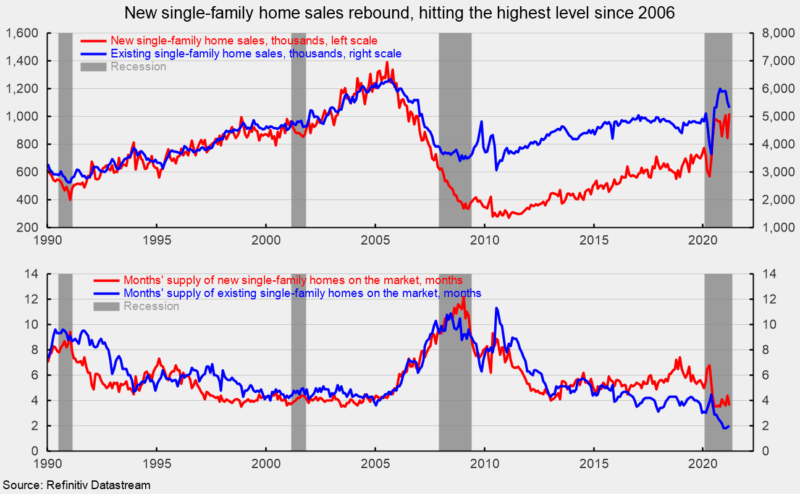 Sales of new single-family homes rose sharply in March, increasing 20.7 percent to 1.021 million at a seasonally-adjusted annual rate from a 846,000 pace in February. Sales are an astonishing 66.8 percent above the year ago level (see top of first chart). Sales were up in three of the four regions of the country in March with strong double-digit gains in the Northeast, the South, and the Midwest but a 30.0 percent drop in the West.  From a year ago, sales are also up in three regions: 78.4 percent in the Midwest, 90.1 percent in the South, and 108.7 percent in the Northeast, but down 2.0 percent in the West.

While sales of new single-family homes rose in March, sales in the market for existing single-family homes, which account for around 90 percent of total existing-home sales, fell 4.3 percent, coming in at a 5.30 million seasonally adjusted annual rate. From a year ago, sales are up 10.4 percent. The March pace is the ninth consecutive month above the 5 million mark but is down from a recent peak of 6.01 million in October 2020 (see top of first chart).

The total inventory of new single-family homes for sale was unchanged at 307,000 in March, leaving the months’ supply (inventory times 12 divided by the annual selling rate) at 3.6, down 18.2 percent from February and 44.6 percent below the year-ago level (see bottom of first chart). The median time on the market for a new home was unchanged in March, coming in at 3.6 months.

Potential headwinds for the housing market include rising mortgage rates and elevated home prices. The median sales price of a new single-family home was $330,800, the third decline in a row but still a rise of 0.8 percent from a year ago. The median sale price in March of an existing single-family existing home was $334,500, an 18.4 percent rise over the past year (see second chart).

The combination of high prices and rising mortgage rates will hurt affordability and likely contribute to slower housing activity in the future.  It is likely that in time these conditions will significantly impact the overall housing market, but for now it remains one of the brightest areas of the economy with strong demand, tight supply, and rising prices.

This article, New Single-Family Home Sales Jump in March, was originally published by the American Institute for Economic Research and appears here with permission. Please support their efforts.