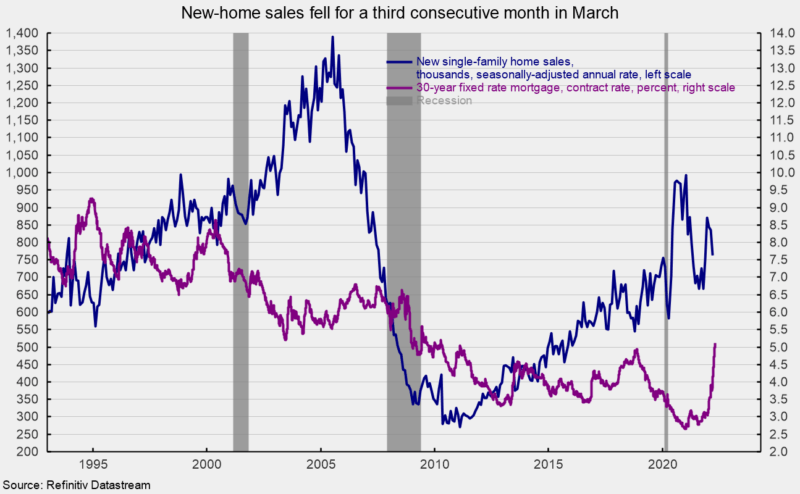 Sales of new single-family homes fell in March, declining 8.6 percent to 763,000 at a seasonally-adjusted annual rate from a 835,000 pace in February. The March drop follows a 1.2 percent decline in February and a 3.0 percent drop in January. The three-month run of decreases leaves sales down 12.6 percent from the year-ago level (see first chart). New home sales surged in the second half of 2020 but then slowed sharply in the first three quarters of 2021, hitting a low of 667,000 in October. Following the October low, sales posted two strong gains in November and December but have reversed some of those gains in the first quarter of 2022 (see first chart). Meanwhile, 30-year fixed rate mortgages were 5.11 percent in late April, up sharply from a low of 2.77 percent in August 2021 (see first chart).

The total inventory of new single-family homes for sale rose 3.8 percent to 407,000 in March, putting the months’ supply (inventory times 12 divided by the annual selling rate) at 6.4, up 14.3 percent from February and 52.4 percent above the year-ago level (see fourth chart). The months’ supply is at a relatively high level by historical comparison and is substantially higher than the months’ supply of existing single-family homes for sale (see fourth chart). The relatively high months’ supply and surge in mortgage rates may be among the reasons for slowing gains in the median home price. The median time on the market for a new home remained very low in March, coming in at 3.0 months versus 2.9 in February.

This article, New Single-Family Home Sales Fell Again in March as Prices and Mortgage Rates Continue to Rise, was originally published by the American Institute for Economic Research and appears here with permission. Please support their efforts.