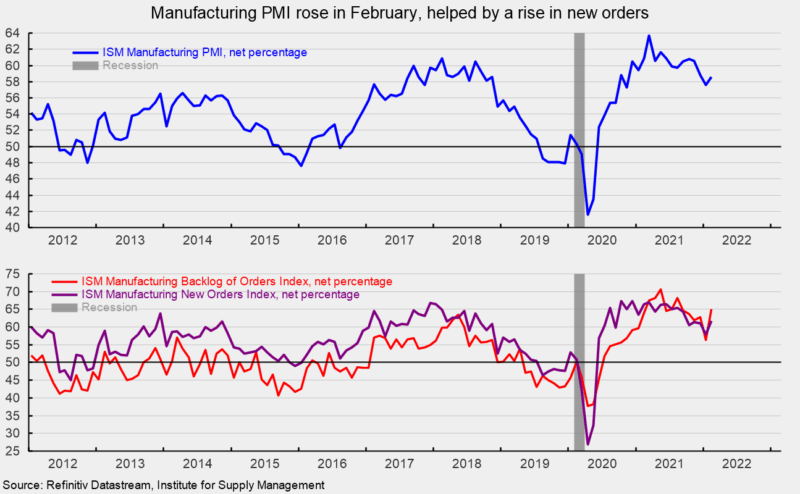 The Institute for Supply Management’s Manufacturing Purchasing Managers’ Index rose to 58.6 in February, up 1.0 point from 57.6 percent in January. February is the 21st consecutive reading above the neutral 50 threshold (see top of first chart). The survey results indicate that the manufacturing sector continues to expand despite ongoing labor and material constraints. The report suggests demand remained strong and despite complications from Covid, production improved. The report also suggests labor shortages from quits and retirements remain a significant headwind. Overall, survey respondents remain optimistic.

The new orders index rose 3.8 points to 61.7 percent in February. It has been above 50 for 21 consecutive months, and it moved back above 60 after a one-month dip below 60 in January; the index is now at the highest level since September 2021 (see bottom of first chart). The new export orders index, a separate measure from new orders, rose to 57.1 versus 53.7 in January. The new export orders index has been above 50 for 20 consecutive months.

The Backlog-of-Orders Index posted a strong gain in February, coming in at 65.0 versus 56.4 in January, an 8.6-point jump, to the highest level since August 2021 (see bottom of first chart). This measure has pulled back from the record-high 70.6 result in May 2021 but has been above 50 for 20 consecutive months. The index suggests manufacturers’ backlogs continue to rise and that the pace accelerated in February.

The Production Index registered a 58.5 percent result in February, a rise of 0.7 points from January. The index has been above 50 for 21 months and while the level is below the results of late 2020 and early 2021, the index remains at a favorable level by longer-term historical comparison (see second chart).

The Employment Index pulled back in February but remained above neutral for the sixth consecutive month and fifteenth consecutive reading at or above the neutral 50 level, coming in at 52.9 percent (see second chart). Despite the slower pace of expansion in February, the run of results at or above neutral is an indication that some of the labor issues plaguing production may start to ease in coming months.

The Bureau of Labor Statistics’ Employment Situation report for February is due out on Friday, March 4th. Consensus expectations are for a gain of 438,000 nonfarm payroll jobs including the addition of 23,000 jobs in manufacturing. As of the January employment report, manufacturing payrolls were still 226,000, or 1.8 percent, below the February 2020 level.

Customer inventories in February are still considered too low, with the index coming in at 31.8, off 1.2 points from January (index results below 50 indicate customers’ inventories are too low). The index has been below 50 for 65 consecutive months. Insufficient inventory is a positive sign for future production.

The index for prices for input materials fell slightly in February, off 0.5 points to 75.6 percent versus 76.1 percent in January (see third chart). The index is down from a recent peak of 92.1 in June 2021 but still at a high level by historical comparison. Meanwhile, the supplier deliveries index registered a 66.1 result in February, up 1.5 points from the January result. The rise suggests deliveries slowed again in February and that the pace accelerated somewhat. While both of these indexes remain elevated by historical comparisons, they are down significantly from the 2021 peaks.

Overall, demand for the manufacturing sector remains robust but labor difficulties, materials shortages, and logistical problems continue to hamper the ability to meet that demand. While there has been some modest progress, the period of normalization has been extended by recurring waves of Covid, labor turnover, and worker retirement. The delayed return to normalcy is sustaining upward pressure on prices. Recent events in Ukraine may be yet another source of disruption and further delay the return to normalcy.

This article, Manufacturing-Sector Survey Showed Strong Results in February, was originally published by the American Institute for Economic Research and appears here with permission. Please support their efforts. 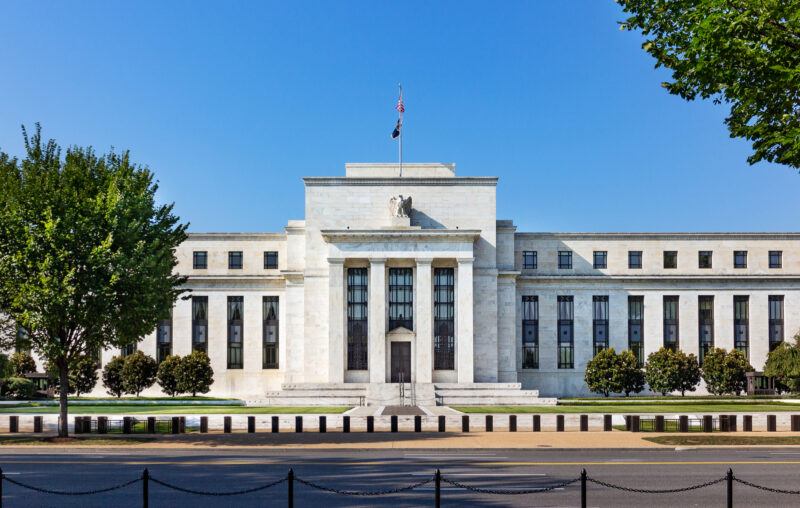