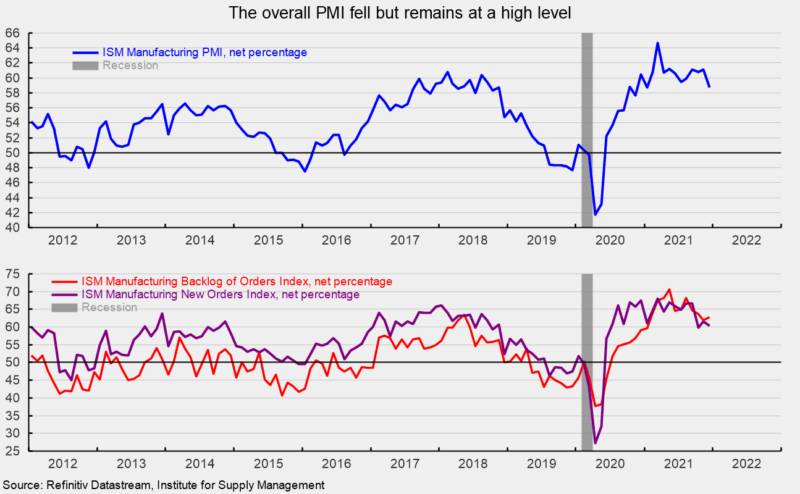 The Institute for Supply Management’s Manufacturing Purchasing Managers’ Index fell to 58.7 in December, off 2.4 points from 61.1 percent in November. December is the 19th consecutive reading above the neutral 50 threshold but is the lowest reading since a similar result in January 2021 (see top of first chart). The survey results suggest that the manufacturing sector continues to expand but at a slightly less robust pace.

Demand measures remained strong overall despite a slight pullback in the New Orders Index. The index fell 1.1 points to 60.4 percent in December. It has been above 50 for 19 consecutive months and above 60 for 17 of the last 18 months (see bottom of first chart). The new export orders index, a separate measure from new orders, fell slightly to 53.6 versus 54.0 in November. The new export orders index has been above 50 for 18 consecutive months.

The Backlog-of-Orders Index increased in December, coming in at 62.8 versus 61.9 in November (see bottom of first chart). This measure has pulled back from the record-high 70.6 result in May but has been above 50 for 18 consecutive months and above 60 for 11 consecutive months. The index suggests manufacturers’ backlogs continue to rise at a rapid pace but slower than in early 2021.

The Production Index registered a 59.2 percent result in December, a drop of 2.3 points from November. The index has been above 50 for 19 months and has been trending sideways at a high level, averaging 60.0 over the last nine months (see second chart).

The Employment Index rose again in December, posting its third consecutive increase and fourth consecutive reading above the neutral 50 level, rising to 54.2 percent (see second chart). That is the strongest result since April. The run of increases and results above neutral may be an early indication that some of the labor issues plaguing production could start to ease in coming months.

The Bureau of Labor Statistics’ Employment Situation report for December is due out on Friday, January 7th. Consensus expectations are for a gain of 400,000 nonfarm payroll jobs including the addition of 35,000 jobs in manufacturing. Manufacturers have added 49,389 workers per month over the last 18 months for a total gain of 889,000, putting payrolls at the highest level over the recovery, but they are still down about 253,000 compared to pre-pandemic levels.

Customer inventories in December are still considered too low, with the index coming in at 31.7. That is up 6.6 points from November and matches the highest level since February (index results below 50 indicate customers’ inventories are too low). The index has been below 50 for 63 consecutive months. Insufficient inventory is a positive sign for future production.

The index for prices for input materials fell sharply in December, dropping 14.2 points to 68.2 percent versus 82.4 percent in November (see third chart). The index is down from a recent peak of 92.1 in June and is now at the lowest level since November 2020. Meanwhile, the supplier deliveries index registered a 64.9 result in December, also down sharply, falling 7.3 points from the November result. The drop suggests deliveries slowed again in December but at a significantly slower pace. While both of these indexes remain elevated by historical comparisons, the significant declines over the last few months are likely early signs that some of the issues restraining supply may be easing. Progress is also reflected in some of the comments made by respondents to the survey.

” Price increases appear to be slowing. Lead times are shrinking slowly, and inventories are growing. I hope we have reached the top of the hill to start down a gentle slope that lets us get back to something that resembles normal.” [Fabricated Metal Products]

“Costs for steel seem to be coming down some. We have seen a little relief on steel prices, but they are still very high. Overall performance by suppliers has improved. On-time deliveries have improved.” [Machinery]

There were also several comments about continuing materials shortages, labor issues, and transportation and logistical problems, but the possibility of easing in some industries is a positive sign. Overall, demand for the manufacturing sector remains robust as labor difficulties, materials shortages, and logistical problems continue to hamper the ability to meet that demand in many areas. While there are early signs of some easing, new waves of Covid threaten to extend the period of normalization and sustain upward pressure on prices.

This article, Manufacturing-sector Demand Remains Strong Amid Early Signs of Supply Chain Improvement, was originally published by the American Institute for Economic Research and appears here with permission. Please support their efforts.