July Jobs Report Not as Impressive as Headline Suggests 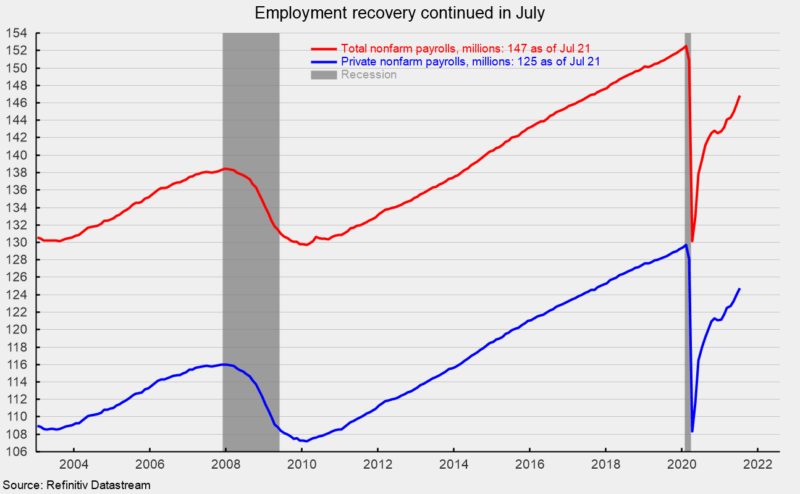 However, the headline gain was boosted by a large jump of 230,000 in state payrolls. Private payrolls posted a less impressive though still strong 703,000 jobs gain in July after a 769,000 gain in June. The July rise in private payrolls is also the seventh in a row and 14th in the last 15 months. The July addition brings the seven-month gain to 3.721 million and the 15-month recovery to 16.433 million versus a combined loss of 21.353 million in March and April of 2020, leaving private payrolls 4.92 million below the February 2020 peak (see first chart). If private payrolls continue to grow at the average over the last seven months (531,571), it would also take about nine months to fully recoup all of the job losses.

The breadth of gains was positive again in July. Within the 703,000 gain in private payrolls, private services added 659,000 while goods-producing industries added 44,000. For private service-producing industries, the gains were again led by a surge in leisure and hospitality, adding 380,000, accounting for more than half of the total gain in private payrolls, an 87,000 gain in education and health care services, a 60,000 rise in business and professional services, and 50,000 new jobs in transportation and warehousing. Retail continued to be somewhat volatile, losing 6,000 jobs in July, the second decline in the last four months (see second chart).

After 15 months of recovery, all the major private industry groups still have fewer employees than before the government lockdowns. Three industries – Leisure and hospitality (down 1.737 million jobs), education and health services (down 953,000), and professional and business services (off 556,000) – are down more than half a million jobs each (see third chart).

On a percentage basis, the losses are more evenly distributed. Three of the 14 private industries shown in the report have declines of 4 percent or more since February 2020. Leisure and hospitality leads with a 10.3 percent drop since February 2020, mining and logging comes in second with a 7.7 percent loss followed by information services at 5.9 percent. For the labor market as a whole, total nonfarm payrolls and private payrolls are down 3.8 percent since February 2020 (see fourth chart).

The average workweek was unchanged at 34.8 hours in July. Combining payrolls with hourly earnings and hours worked, the index of aggregate weekly payrolls gained 0.9 percent in July. The index is up 10.6 percent from a year ago.

The participation rate increased by 0.1 percentage points in July, coming in at 61.7 percent versus a participation rate of 63.3 percent in February 2020. The employment-to-population ratio, one of AIER’s Roughly Coincident indicators, came in at 58.4 for July, up from 58.0 in June but well below the 61.1 percent in February 2020 (see bottom of fifth chart).

The July jobs report posted a very strong headline gain of 943,000 in July. Private payrolls also had a strong gain but not as strong as the total would suggest as seasonal adjustments exaggerated the disrupted seasonal patterns in local education employment. Furthermore, while there were increases in most industries within private payrolls, more than half of the 703,000 gain came from just one industry, leisure and hospitality. Despite the seven consecutive monthly gains and 14 increases in the last 15 months, payroll employment remains well below peak measures from before the pandemic.

Other measures of economic activity generally suggest the economic recovery from the government lockdowns in 2020 is continuing as the restrictions on consumers and businesses are lifted. However, the damage done by the lockdowns was severe. The inability of supply to recover as quickly as demand is resulting in shortages in some areas of the economy and putting significant upward pressure on prices. Furthermore, the rising number of new Covid cases from the Delta variant is a growing risk to the recovery. The overall outlook is tilted to the upside, but challenges remain, and risks are growing.

This article, July Jobs Report Not as Impressive as Headline Suggests, was originally published by the American Institute for Economic Research and appears here with permission. Please support their efforts.