Job Openings Soar to Another Record High in April 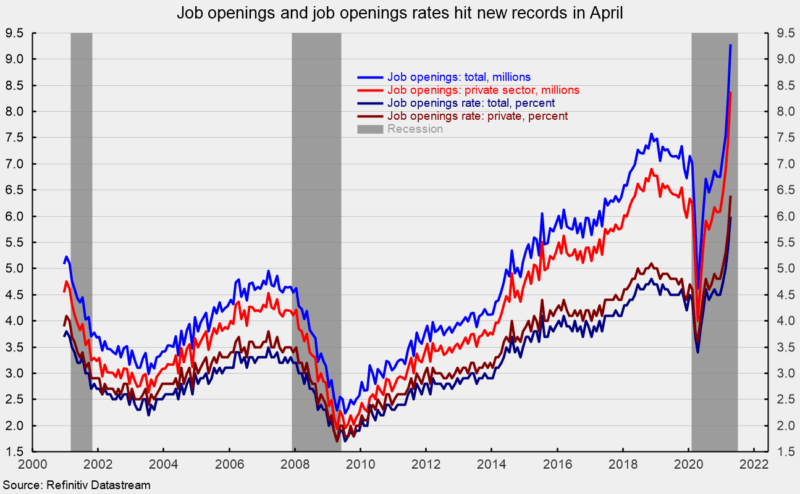 The total job openings rate, openings divided by the sum of jobs plus openings, reached 6.0 percent in April while the private-sector job-openings rate increased to 6.4 percent, up from 5.7 percent in March. These two measures are also at new record highs (see first chart).

The rise in private job openings was a function of hires, separations and changing labor requirements. Private hires in April rose to 5.728 million from 5.646 million in March. At the same time, the number of private-sector separations rose to 5.422 million in April, up from March’s 5.100 million. Within separations, private quits were 3.763 million (versus 3.387 million in March) and layoffs were 1.354 million, down from 1.433 million in the prior month.

The total separations rate rose to 4.0 percent from 3.8 percent in the prior month with the private sector experiencing a rate of 4.4 percent, up 0.2 percentage points from 4.2 percent in March.

From the worker perspective, labor market conditions improved again in April. The number of openings per job seeker (unemployed plus those not in the labor force but who want a job) rose to 0.606 in April, up sharply from 0.505 in March, and well above the April 2020 low of 0.156. This measure has risen sharply over the last few months and is now closing in on the record high of 0.721 in October 2019 (see fourth chart).

Overall, the data relating to the labor market continue to improve including last month’s jobs report which showed a net increase of 559,000 payroll jobs for May, and the continued decline in the number of weekly initial claims for unemployment benefits. These measures all suggest a tightening labor market. However, the unemployment rate is still elevated at 5.8 percent (versus 3.5 percent before the pandemic) while the broader underemployment rate (U-6 rate) was 10.2 percent for May (versus 6.8 percent in December 2019). Furthermore, the participation rate (employed plus unemployed looking for work as a percentage of the labor force) was 61.6 percent for May, well below 63.4 percent prior to the pandemic. The labor force has shrunk by about 3.5 million people since January 2020.

This article, Job Openings Soar to Another Record High in April, was originally published by the American Institute for Economic Research and appears here with permission. Please support their efforts.