Job Openings Inch Up to Another Record High in May 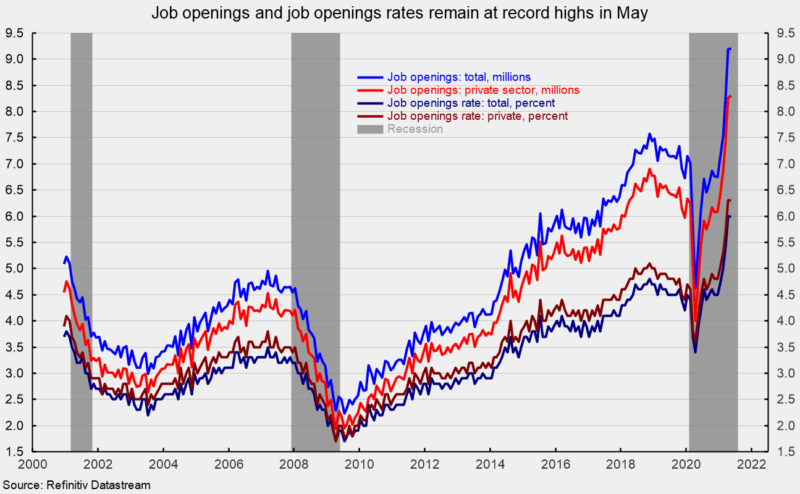 The rise in private job openings was a function of hires, separations and changing labor requirements. Private hires in May totaled 5.619 million versus 5.661 million in April. At the same time, the number of private-sector separations fell to 5.035 million in May, down from April’s 5.478 million. Within separations, private quits were 3.438 million (versus 3.810 million in April) and layoffs were 1.299 million, down from 1.365 million in the prior month.

The total separations rate fell to 3.7 percent from 4.0 percent in the prior month with the private sector experiencing a rate of 4.1 percent, off 0.4 percentage points from 4.5 percent in April.

From the worker perspective, labor market conditions remained tight in May. The number of openings per job seeker (unemployed plus those not in the labor force but who want a job) fell slightly to 0.596 in May, down from 0.605 in April, but well above the April 2020 low of 0.156. This measure has risen sharply over the last few months and is now closing in on the record high of 0.721 in October 2019 (see fourth chart).

Overall, the data relating to the labor market continue to suggest a tight, robust labor market including June’s jobs report which showed a net increase of 850,000 payroll jobs, and the continued decline in the number of weekly initial claims for unemployment benefits. The conclusions are confirmed by private-sector business surveys which show businesses struggling to find and retain qualified workers.

However, at the same time, the unemployment rate is still elevated at 5.9 percent (versus 3.5 percent before the pandemic) while the broader underemployment rate (U-6 rate) was 9.8 percent for June (versus 6.8 percent in December 2019). Part of the discrepancy is related to the participation rate (employed plus unemployed looking for work as a percentage of the labor force) which was 61.6 percent for June, well below the 63.4 percent prior to the pandemic. The labor force has shrunk by about 3.5 million people since January 2020.

This article, Job Openings Inch Up to Another Record High in May, was originally published by the American Institute for Economic Research and appears here with permission. Please support their efforts.