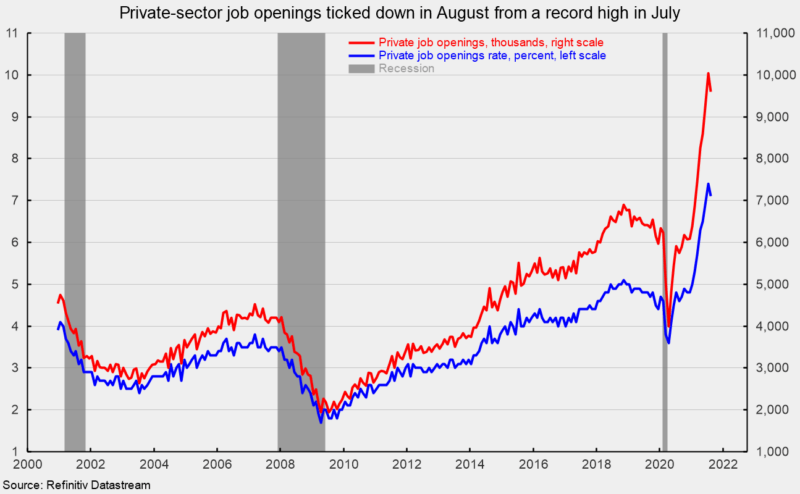 The total job openings rate, openings divided by the sum of jobs plus openings, fell to 6.6 percent in August from 7.0 percent in July while the private-sector job-openings rate dropped to 7.1 percent from 7.4 percent (see first chart).

The number of private-sector separations rose to 5.712 million in August, up from July’s 5.535 million. Within separations, private quits were 4.096 million (versus 3.872 million in July; see fourth chart) and private layoffs were 1.290 million, down from 1.368 million in the prior month.

Trade, transportation, and utilities led with 1.024 million quits in August followed by leisure and hospitality with 971,000 and professional and business services with 706,000 (see fifth chart).

The quits rates among the private-sector industry groups was led by leisure and hospitality with a rate of 6.4 percent, well ahead of the number two, trade transportation, and utilities, with a 3.7 percent quits rate and number three, professional and business services, with a 3.4 percent rate (see sixth chart).

From the worker perspective, labor market conditions remained very favorable in August. The number of openings per job seeker (unemployed plus those not in the labor force but who want a job) ticked down slightly to 0.759 in August from a record high 0.782 in July (see seventh chart).

Overall, today’s job openings data continue to suggest a very tight labor market. However, the weaker-than-expected September jobs report (the second disappointment in a row) showed a net increase of just 194,000 payroll jobs, though the weakness was largely concentrated in public-sector education where a shift in hiring patterns may have disrupted seasonal adjustment. Private payrolls posted a 317,000 gain in September after a 332,000 gain in August. The pace of gain was less robust than expected, but the gains were widespread. Slower hiring may be a function of the recent resurgence in new Covid cases, or it may reflect the difficulty employers are having finding workers, or both.

Ongoing fallout from the pandemic and government lockdowns continues to ripple through the global economy, resulting in product and materials shortages, manufacturing delays, and shipping and logistical problems.  All these are pushing up prices across the economy. Subsequently, rising prices have led to falling consumer confidence, boosting the risks for the economic outlook. A consumer retrenchment would further hinder the recovery, though the damage will be far less than the carnage caused by widespread lockdowns. Overall, the outlook is for continued recovery but the threats and headwinds to growth remain significant.

This article, Job Openings Fell in August but Remain Extremely High, was originally published by the American Institute for Economic Research and appears here with permission. Please support their efforts.