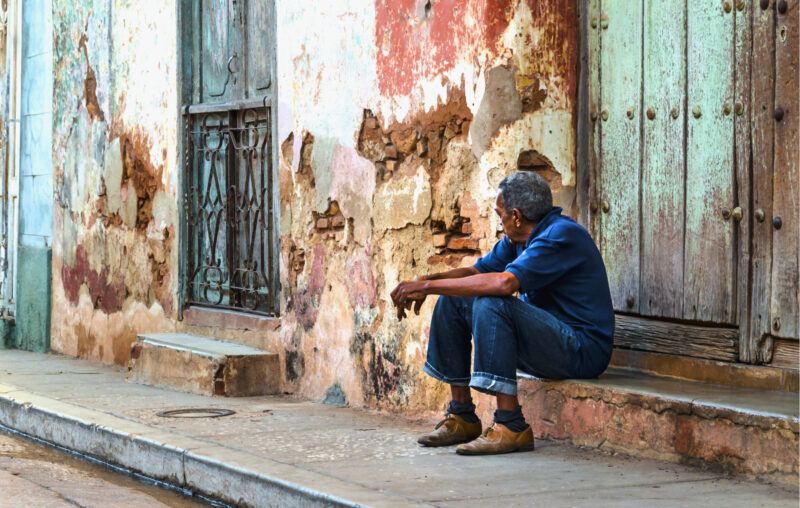 I don’t know how many protests, solidarity movements, refugees, human rights alerts, economic collapses, and purges are going to get this message through everyone’s heads, Communism is a terrible system of governance. In fact, at this point, we should be consistent. Any government that does not guarantee as to the very justification for its existence, individual rights, open markets, and accountable governance, is worth challenging.

I am of course referring to the ongoing protest in Cuba, to which those on the far left will shamefully attribute to the US embargo on the Communist regime. Others may simply beat around the bush and try to attribute the reasons for the protests to current events. Although all these may contribute to the discontent fueling the Cuban protests, just like every single Communist regime, the ultimate reason why things are going poorly is that the people live under a crushing regime of incompetence and oppression.

To make room for a colleague that will inevitably publish on the Cuban protests in more detail, my article will focus not on Cuba but on the general topic of Communism.

The Shameful Track Record of Communism

Real Communism has never been tried before, but it certainly has been attempted in all sorts of flavors and every single one of them sucked. For some reason, their leaders can’t bring themselves to care about the rights of individuals. Perhaps it undermines their overall collectivist views? Perhaps individual dignity would lead down the slippery slope to capitalism? Perhaps individual rights and preferences are a bourgeois construct? That’s certainly what Che Guevara, the leader of Cuba’s Communist revolution, and Fidel Castro, Communist Cuba’s first leader thought. In fact, Human Progress points out,

“Both Guevara and Castro considered homosexuality a bourgeois decadence. In an interview in 1965, Castro explained that “A deviation of that nature clashes with the concept we have of what a militant communist should be.”

Although the American Left somehow rationalizes the deification of men like Che Guevara, they seem to conveniently forget that much like all power-hungry dictators with no regard for human life, he was blatantly a racist, a bigot, and a mass murderer. Human Progress notes,

“According to Álvaro Vargas Llosa, homosexuals, Jehova’s Witnesses, Afro-Cuban priests, and others who were believed to have committed a crime against revolutionary morals, were forced to work in these camps to correct their “anti-social behavior.” Many of them died; others were tortured or raped.”

To briefly highlight some of the many atrocities committed by Communist regimes let’s start with China. It’s been a little bit more than a month since the anniversary of China’s Tiananmen Square Massacre and tens of millions died in Mao’s Great Leap Forward as well as the Cultural Revolution. A failure of Communist economic and political reform respectively. North Korea is such a repressive and poor country, it’s hard to even know where to begin. Furthermore, there are entire books about how life in the Soviet Union sucked.

In Cambodia (this one is cool because my family fled this genocide so that’s why we all live in America now), under the communist Khmer Rouge, not only did they manage to kill off as much of a quarter of the population, but the mass murder, starvation, and torture got so out of hand, communist Vietnam had to intervene with military force. Vietnam is probably one of the more well-behaved communist nations; however, they still have a repressive one-party state and much like China, their current economic success is directly attributed to market reforms. In other words, becoming less communist and more capitalist.

It is simply puzzling that in all these regimes that purport to represent the proletariat, they end up doing more to impoverish and oppress the working class than even the most sadistic capitalist. In hindsight, it really isn’t that difficult of a question. As mentioned before, any government that does not protect individual rights, open markets, and constraints on power is not only a recipe for disaster but a moral tragedy.

In liberal democracies, like the United States, there is much talk about the consent of the governed to which governments derive their legitimacy. We already have trouble justifying the impositions that we live under as truly consensual. Such a notion cannot even remotely exist in a Communist regime or any authoritarian regime for that matter.

There is not a single country that adopted Communism or moved in its direction that was able to provide the standards of living and prosperity found in a free and open society like the United States. In fact, that bar is too high, because not a single one has produced any sort of relative prosperity without some sort of market reform, and not a single one can produce a human rights record that doesn’t make the problems in freer countries look like child’s play.

The Basics of Governance

It has become fashionable for some, like the Chinese Communist Party and all those around the world who share their sentiments, to call for a system of moral relativism when it comes to governments. Respect the rights of governments, not individuals. Such a way of thinking believes that the world must be inclusive of different types of political systems, from the freest to the most oppressive. It eschews any sort of moral foundation when it comes to the rights of individuals or sound economic thinking. It subscribes to the fantasy that different political systems work for different countries.

This is empirically false, which is why the current rules-based international order holds that human rights and open markets are the universal standards for good state conduct.

Take a look at any economic freedom index. There is a powerful correlation between prosperity and free markets. Objective metrics such as infant mortality rates, educational attainment, calorie consumption, life expectancy, and other desirable indicators are all better in richer countries than poorer countries. Basic political science and legal theory tell us that checks and balances are necessary for an accountable government, whether that be preventing the arbitrary use of power or full-on massacres.

Think about it; qualified immunity, a doctrine granting protections for police in the United States against being sued for infringing on a private citizen’s rights, already causes enough problems here. Imagine if an entire government had such privileges? A restrained and gridlocked government is far preferable to an unrestrained and power-drunk one.

Finally, there’s the basic truth that governments cannot run society; they merely exist to facilitate a productive natural order by securing rights and establishing peace. Commerce, invention, culture, and trade arises spontaneously without central dictate. This is why societies in command economies like Maoist China were incredibly bleak and drab. This is also why former Soviet Union president Boris Yeltsin was so amazed and awestruck when he visited a grocery store in the United States. The New Haven Register notes,

“He told his fellow Russians in his entourage that if their people, who often must wait in line for most goods, saw the conditions of U.S. supermarkets, there would be a revolution.”

People will always try to find some superficial reason for why a Communist state is failing, whether it’s because of sanctions, resource shortages, inflation, civil unrest, or what have you. These are all fine and good but they ultimately fail to see the elephant in the room. Or in this case, the highly authoritarian, oppressive, and economically incompetent system in place.

We live in an age where ignorance is a choice when it comes to the superiority of a free and open society. The quicker we stop averting our eyes and look at the facts, the quicker we can move towards a world where every individual, regardless of their geographical and political fortune, can live free and prosper.

This article, It’s About Time We Stopped “Trying Communism”, was originally published by the American Institute for Economic Research and appears here with permission. Please support their efforts.