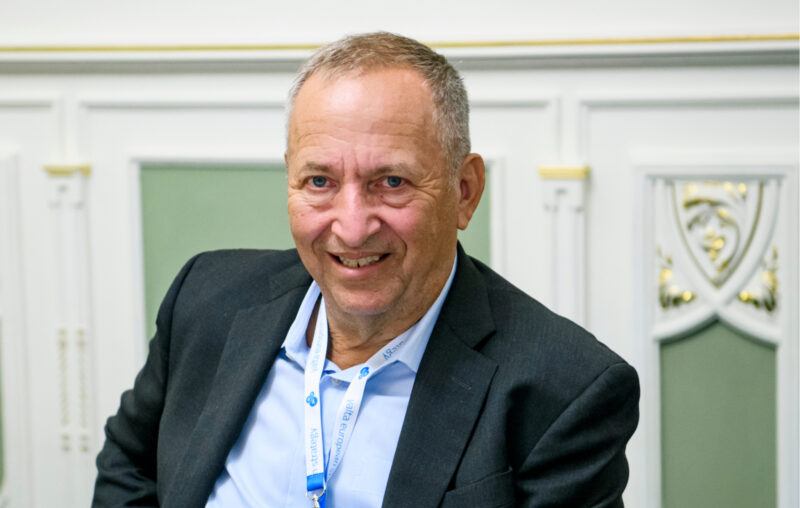 Larry Summers, who served as U.S. Treasury Secretary under Bill Clinton, and head of the National Economic Council in the early years of the Obama administration began sounding the alarm on the possibility of inflation several months ago. Until recently, I suspect few would have described him as an inflation hawk. And yet, he has been making the rounds of late to warn about the possibility of a “collision between fiscal and monetary policy.”

As someone who has supported fiscal expansion as a means of promoting macroeconomic stability, Summers has been unusually cautious. He seems to believe that the size of the output gap was not large enough to merit the unprecedented level of monetary expansion that has been administered by Jerome Powell.

In February, Summers participated in a discussion with Paul Krugman where he outlined his concerns. He notes that:

Elsewhere, Summers explains that the current labor shortage will drive up wages and that we have already seen monthly rents for new tenants increase by 17 percent, on average, above the rents paid by previous tenants.

Summers believes that the “toxic side effects of QE” are not being recognized by policymakers. In an interview, Larry Summers used a rather peculiar metaphor to describe this situation.:

So, I look at that dwindling hole. Then I look at expenditures that aren’t hard to add into the multiple trillions, and I see substantial risk that the amount of water being poured in vastly exceeds the size of the bathtub.

When I heard Summers use this metaphor, my mind was drawn to a passage I first read over a decade ago from Benjamin Anderson in his reflection on the Great Depression. In referring to monetary policy that preceded the initiation of the Great Crash in October 1929, he wrote:

When a bathtub in the upper part of the house has been overflowing for five minutes, it is not difficult to turn off the water and mop up. But when the bathtub has been overflowing for several years, the walls and the spaces between ceilings and floors have become full of water, and a great deal of work is required to get the house dry. Long after the faucet is turned off, water still comes pouring in from the walls and from the ceilings. It was so in 1928 and 1929.

Consistent with both statements is the belief that the monetary policy provided more stimulus than was merited by prevailing economic conditions. And consistent with Summers’ belief that excessive monetary support can be toxic, Anderson bemoans the extensive damage that can occur when the water spigot is left on for too long.

While Summers and Anderson have contrary views with regard to fiscal stimulus, both recognize that there is an upper limit to the benefits of monetary expansion. Anderson viewed the Federal Reserve as financing a boom in stocks across the 1920s. “[T]he Federal Reserve System used them [open market operations] deliberately for the purpose of relaxing the money market and stimulating bank expansion in 1924 and 1927. At a time when unusual circumstances called for extra caution, they abandoned the old standards and became daring innovators in the effort to play God.”

Compared to Summers, Anderson is quite conservative. Yet, Summers recognizes the theoretical limits of monetary policy. Summers has represented his views as “simple arithmetic.” Even before the crisis, Summers critiqued modern monetary theory (MMT). When asked why the U.S. can’t take advantage of its status as the world’s reserve currency, referring to its dominant position as an international media of exchange, Summers responded that “we won’t have the reserve currency forever if we do that. . . . In all things economics is a matter of balance.”

During our graduate studies, Peter Boettke constantly reminded my colleagues that “economics puts parameters on people’s Utopias.” No doubt. This is a universal of economics. And it is such recognition that separates the economist from the ideologue. I disagree with a number of policy stances promoted by Larry Summers, but I would be a fool to say that he is ignorant of macroeconomic theory.

Summers believes that fiscal policy should be used to promote better environmental outcomes and to improve equity while also accepting, as Alex Salter has argued, that the use of monetary policy for these aims is a recipe for disaster. Summers is also “nervous” about the Fed setting out “to target the unemployment rate of particular groups without regard to inflation [as] that would be a good way to make really serious inflation.”

The Fed needs to concentrate on monetary policy. This is a serious job that requires serious focus. Perhaps Summers recognizes that the post-2008 monetary framework has created a fiscal Fed. Or maybe he will.

Summers’ demands for limits to the aims of monetary policy might be politically feasible under the old Volcker-Greenspan regime. Under that monetary regime, inflationary pressure placed strict limits on the expansion of the balance sheet. The political incentives now faced by both politicians and Fed officials promote precisely the sort of oversized fiscal expansions that we have observed in the last two years, the same expansions that Summers decries.

The post-2008 framework has incentivized the destabilization of monetary policy. The sooner we recognize this fact, the sooner we can seriously discuss a solution to the problem.

This article, Is Larry Summers Channeling Benjamin Anderson?, was originally published by the American Institute for Economic Research and appears here with permission. Please support their efforts.