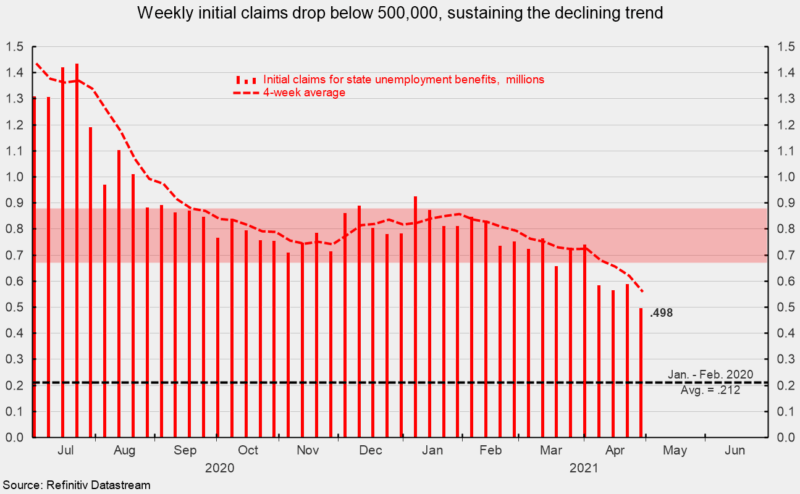 Initial claims for regular state unemployment insurance totaled 498,000 for the week ending May 1, a drop of 92,000 from the previous week’s upwardly revised tally of 590,000 (see first chart). The current result is the lowest level since March 14, 2020 and continues to suggest an improving outlook for the labor market and overall economy.

The four-week average fell 61,000 to 560,000, the fourth consecutive week below 700,000 and first week below 600,000 since March 14, 2020. Initial claims are likely to continue trending lower as the combination of vaccine distribution and easing government restrictions on consumers and businesses push the economy closer to pre-pandemic levels of activity.

The number of ongoing claims for state unemployment programs totaled 3.756 million for the week ending April 17, down 57,150 from the prior week. The latest reading is the fourth consecutive week below 4 million and the lowest since the lockdowns began in March 2020 (see second chart).

The total number of people claiming benefits in all unemployment programs including all emergency programs was 16.157 million for the week ended April 17, down 404,509 from the prior week. Total claims have been in the 16 to 20 million range since November but have fallen in five of the last six weeks and are at the second-lowest level since April 4, 2020 (see second chart).

This article, Initial Claims and Continuing Claims for Unemployment Benefits Fall in the Latest Week, was originally published by the American Institute for Economic Research and appears here with permission. Please support their efforts.

Here Comes The Fear Campaign To Vaccinate All Of America's Minors

On The Money: Senate in talks to quickly pass infrastructure bill | CBO says bill would add $256B to debt in 10 years