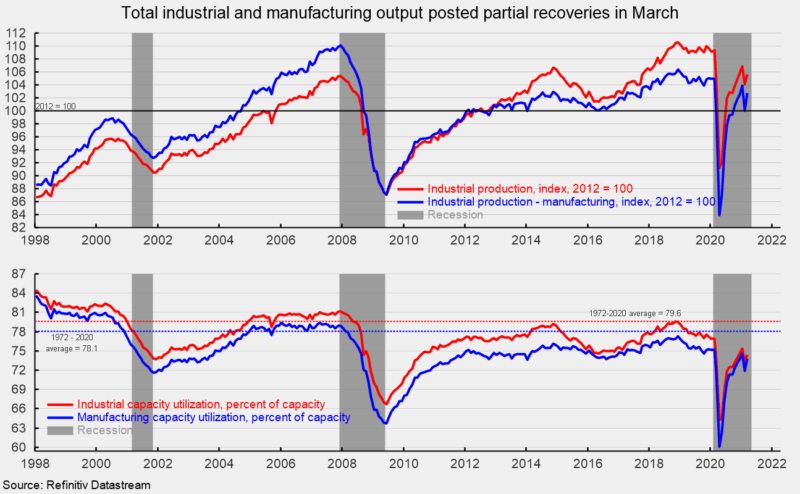 Mining output accounts for about 14 percent of total industrial output and posted a 5.7 percent increase in the latest month (see top of second chart). The rebound followed a 5.6 percent drop in February. Over the last 12 months, mining output is down 8.8 percent.

Utility output, which is typically related to weather patterns, is about 11 percent of total industrial output, and sank 11.4 percent for the month following a 9.2 percent surge in February (see top of second chart). From a year ago, utility output is off 0.2 percent.

Among the key segments of industrial output, energy production (about 25 percent of total output) fell 2.2 for the month (see bottom of second chart) and is down 5.4 percent from a year ago.

Motor-vehicle production (about 5 percent of total output), one of the hardest-hit industries during the lockdowns, gained 2.8 percent in March after a 10.0 percent plunge in February (see bottom of second chart). Motor-vehicle production is up 29.7 compared with March 2020. Total vehicle assemblies rose to 9.29 million at a seasonally-adjusted annual rate. That consists of 9.03 million light vehicles and 0.26 million heavy trucks. Within light vehicles, light trucks were 7.61 million while cars were 1.42 million. In addition to the pandemic, the motor vehicle industry is also struggling with supply chain issues, particularly certain computer chips.

All other industries combined (total excluding energy, high-tech, and motor vehicles; about 2/3rds of total industrial output) gained 2.7 percent in March (see bottom of second chart) and are 1.5 percent above March 2020.

March data on industrial output shows a rebound from the February decline which was severely impacted by weather and not representative of underlying economic conditions.  Despite the March rebound, the industrial sector has a significant way to go before complete recovery to pre-pandemic levels of activity.

Most other recent economic data have been showing significant positive momentum as the combination of the ongoing distribution of vaccines and easing of government restrictions on consumers and businesses are driving the economic recovery. The positive momentum needs to be sustained but in general, the outlook appears to be improving significantly.

This article, Industrial Output Rebounds in March, was originally published by the American Institute for Economic Research and appears here with permission. Please support their efforts.