How Much Can the Supply Chain Explain the Rise of Inflation? 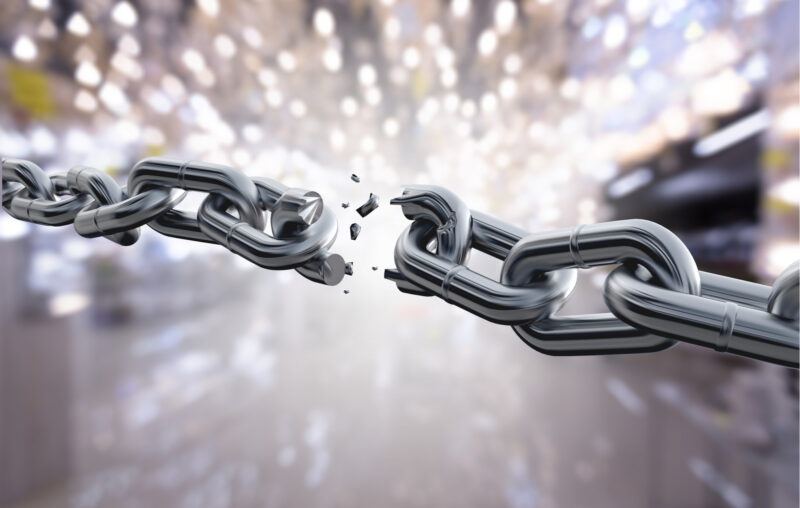 Only a few months ago, we heard that inflation was not a problem, that it would be a transitory condition at worst. We are now hearing from the Federal Reserve that inflation is a point of concern that requires significant action. Monetary authorities went very quickly from no big deal to we must act now.

We have also seen supply-chain explanations of why inflation has been rising lately. This explanation relates to long lines of containers waiting to be allowed to unload their cargo in ports, labor shortages, and a shortage of critical inputs such as chips needed to manufacture cars, among other things. Does the supply-chain explanation hold water? While a first look at the argument seems to make some sense, closer inspection suggests that this issue may not play a major role in a scenario of permanent inflation. Once again, inflation appears to be related to monetary policy.

The textbook definition of inflation is a sustained increase in the general price level. A supply-chain shock that affects a few goods would hardly produce inflation. If cars become more expensive because of supply-chain shortage of circuits, then the extra money spent on vehicles means less money is spent on other goods. Therefore, the price of cars would go up, and the price of other goods would go down. What we have is a change in relative prices, not a change in the general price level. What we need, then, is a massive supply-chain shock because these shortages must affect all or most of the goods. It is unclear that this is the situation we are facing. For instance, the lack of circuits to build cars hardly explains the rise of prices in the real estate market. A first problem, then, is the likelihood that supply-chain issues can affect the general price level.

A second issue has to do with timing and lags. It is well known that an excess of money supply affects the price level with long and variable lags. It may take more than a year for a monetary shock to affect the general price level fully. A supply shock, however, has a much shorter lag. When there is a natural disaster, for example, price gouging occurs immediately rather than months after the event took place. If real shocks affect prices faster than nominal shocks, then the supply-chain explanation faces a problem because this issue is not new. Supply-chain shortages started in 2020 with the outbreak of Covid-19 and corresponding restrictions on business activity.

A third problem with the supply-chain explanation is that it is inconsistent with permanent inflation. Supply shocks are typically a one-time event. A natural disaster hits you once, making the price level jump once. If inflation is going to be permanent, it is unlikely due to a series of supply shocks. What we should see is a continued series of adverse supply-chain shocks. Yet, what we observe is that trade has been opening again rather than closing even more. Businesses such as restaurants and bars have opened more since the outbreak of Covid-19. Even if the supply chain was negatively affected by the identification of the Delta variant this past summer, and the Omicron variant this fall, the pandemic alone is unlikely to result in a permanently higher inflation rate. The more permanent inflation becomes, the harder it is for supply shocks to be a valid explanation.

Why then is monetary policy not signaled as the source of inflation? I suspect there are two reasons. The first one derives from the observation that since the 2008 crisis, the Fed has increased money supply in massive amounts without triggering any significant rise in the price level. Monetary shocks, therefore, seem to be unrelated to inflation. Hence, current inflation must be a supply-side explanation. The problem, of course, is that inflation does not depend only on base money. It depends on a broader money aggregate such as M2 and the behavior of other variables such as money demand and output. Because the increase in base money has not translated to increases in M2 (most of the monetary expansion remains as reserves at the Fed), an increase in the price level should not be expected. The reason we see inflation now is because something has changed recently. As I explained in a previous post, recent government policies have channeled money directly to consumers and firms. I agree with John Cochrane that these stimulus plans are a candidate to explain the recent spike in inflation rates. There is a perception that after 2008 the link between money supply and the price level has broken and that, therefore, nominal shocks cannot explain inflation. That perception is wrong. The link is not broken; the transmission mechanism has changed.

A second reason is political. It is more convenient for the government to argue that inflation is due to supply-chain shocks or scapegoats (such as evil corporations) than admitting it is of their own doing. Can you imagine the Biden Administration admitting that the American Rescue Plan and all those checks sent to families across the country are an important part of the reasons why we have higher inflation today?

This article, How Much Can the Supply Chain Explain the Rise of Inflation?, was originally published by the American Institute for Economic Research and appears here with permission. Please support their efforts.