Housing Starts and Permits Rise in March as Headwinds Grow 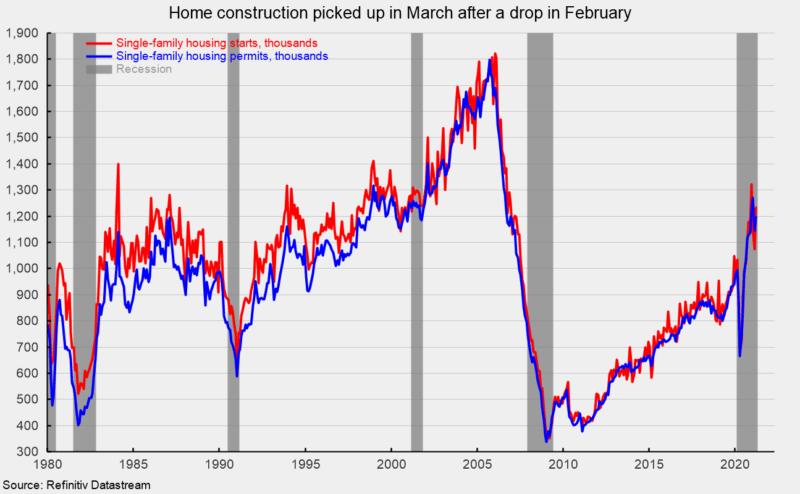 Total housing starts rose to a 1.739 million annual rate from a 1.457 million pace in February, a 19.4 percent increase. The March recovery was expected as weather conditions in significant portions of the country were unfavorable in February and significantly depressed activity. From a year ago, total starts are up 37.0 percent.

The dominant single-family segment saw starts rise 15.3 percent for the month to a rate of 1.238 million. After the March rebound, single-family starts are up 40.7 percent from a year ago.

Starts of multifamily structures with five or more units surged 30.0 percent to 477,000 and are up 26.9 percent over the past year.

Total starts and single-family starts were up in three of the four regions in March with only the West region posting declines.

Home construction has been one of the strongest parts of the economy over the past year and excluding the plunge in activity during the government-enforced lockdowns in early 2020, single-family housing activity has been on an upswing for most of the last decade, recovering from the housing bubble and collapse of the late 2000s (see first chart). The post-lockdown recovery has been supported by a surge in demand as consumers sought less dense housing.

The surge has also been supported by low mortgage rates with rates falling to multi-decade lows (see second chart). However, conditions may be starting to change. Mortgage rates have been rising over the past several weeks, moving about 50 basis points higher off the low. Rates are likely to continue drifting higher as economic activity normalizes and market distortions from monetary policy initiatives are removed. Even with a move higher, rates are low by historical comparison (see second chart).

Another headwind to continued gains in housing activity is rising home prices. Home prices have been rising fairly steadily since the bursting of the housing bubble and increases have accelerated sharply during the pandemic (see third chart). The combination of rising mortgage rates and rising home prices should act as a powerful headwind to future demand.

Furthermore, the surge in demand and activity has sent lumber prices soaring (see fourth chart).  The increase in lumber prices is pressuring profit margins for homebuilders.

The National Association of Home Builders’ Housing Market Index, a measure of homebuilder sentiment, rose in April. According to the report from the NAHB, “Builder confidence remains strong, pointing to gains for single-family construction in 2021. However, rising costs for most kinds of building materials continue to impede positive additional momentum in the market.”

The report added, “Demand remains solid due to low mortgage interest rates and a thin level of inventory in the resale market, which is spurring the need for additional supply. The test for the industry this year will be balancing growth and higher construction costs, given ongoing housing affordability challenges.”

The Housing Market Index rose to 83 in April, up from 82 in March. The three components of the index had mixed results in the latest month but generally remained at favorable levels. The current single-family sales index rose to 88 from 87 in the prior month, the expected single-family sales index fell to 81 from 83, and the traffic of prospective buyers index increased to 75 from 72.

Housing may have enough momentum to grow at a solid pace in 2021 but the combination of rising mortgage rates and rapidly rising home prices will likely lead to some cooling. For the homebuilders, fundamentals remain sound but rising materials costs and labor difficulties are creating challenges.

This article, Housing Starts and Permits Rise in March as Headwinds Grow, was originally published by the American Institute for Economic Research and appears here with permission. Please support their efforts.

Poll Once Again Confirms That Hispanics Hate The Term ‘Latinx’