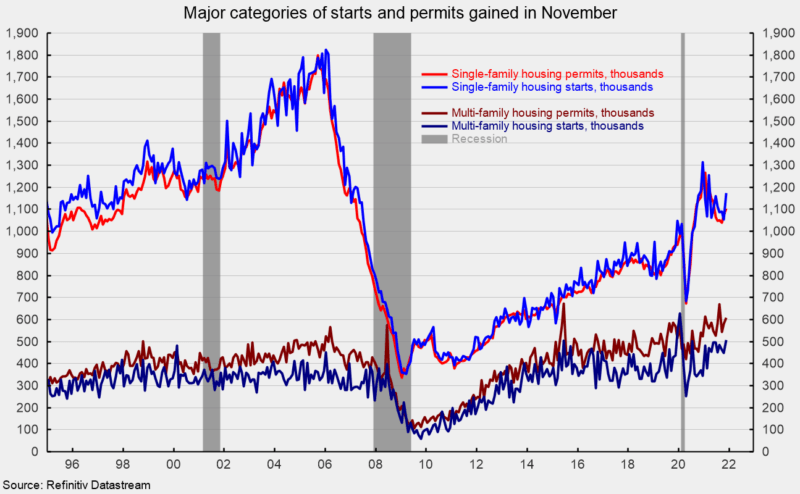 Starts in the dominant single-family segment posted a rate of 1.173 million in November versus 1.054 million in October, a jump of 11.3 percent, but are still down 0.8 percent from a year ago. Single-family permits experienced a 2.7 percent rise to 1.103 million versus 1.074 million in October. Single-family starts and permits have pulled back from a peak around the start of the year but have posted solid gains over the last two months and suggest that housing demand may be getting some renewed support (see first chart).

The surge in housing demand that sent lumber prices soaring to a peak of around $1,686 per 1,000 board feet in May had largely reversed course by September, hitting a low of around $450 in mid-month. However, since the low, lumber prices have started to rise again, hitting $1,110 in mid-December (see fourth chart). The rebound in lumber costs will pressure profits at builders and may lead to more price increases for new homes. Similarly, copper prices, another significant input in new home construction, remain elevated, coming in at $9,215 per metric ton in mid-December (see fourth chart).

Meanwhile, the National Association of Home Builders’ Housing Market Index, a measure of homebuilder sentiment, ticked up for a fourth month in a row in December, to 84 from 83 in November, but remains below the all-time peak of 90 in November 2020 (see fourth chart). Overall sentiment remains relatively high, but labor issues and supply chain disruptions continue to be significant problems.

After a pullback in activity in the first three quarters of 2021, single-family activity looks to be on the rise once again. It may be that implementation of permanent remote working arrangements by some employees, along with low interest rates, may be providing continued support for housing.

This article, Housing Construction Performed Well in November, was originally published by the American Institute for Economic Research and appears here with permission. Please support their efforts.