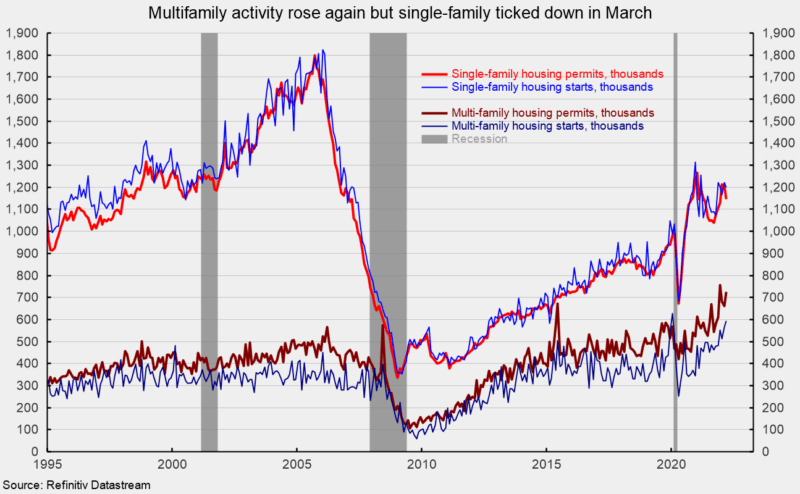 Total housing starts rose to a 1.793 million annual rate in March from a 1.788 million pace in February, a 0.3 percent increase. From a year ago, total starts are up 3.9 percent. Total housing permits also rose in March, posting a 0.4 percent gain to 1.873 million versus 1.865 million in February. Total permits are up 6.7 percent from the March 2021 level. Both categories were led by multifamily housing.

Meanwhile, the National Association of Home Builders’ Housing Market Index, a measure of homebuilder sentiment, fell again in April, coming in at 77 versus 79 in March, but still at a somewhat favorable level. Overall sentiment remains positive, but rising mortgage rates, elevated home prices, and higher input costs are major concerns.

Input costs are a concern for builders, with lumber coming in at around $915 per 1,000 board feet in mid-April, down from peaks around $1,700 in May 2021 and $1,500 in early March 2022 while copper was holding at just over $10,000 per metric ton (see third chart). The high input costs will pressure profits at builders and may lead to more price increases for new homes (see fourth chart).

Furthermore, mortgage rates have rocketed higher recently, with the rate on a 30-year fixed rate mortgage coming in at 5.00 percent in mid-April, nearly double the lows in early 2021 (see fourth chart). Higher home prices and higher mortgage rates are likely to be significant headwinds for future housing activity.

After a pullback in activity in the first three quarters of 2021, single-family activity has shown renewed strength. While the implementation of permanent remote working arrangements for some employees may be providing continued support for housing demand, ongoing home price increases combined with the recent surge in mortgage rates will likely work to cool activity in coming months. Threats to future demand combined with elevated input costs are weighing on homebuilder sentiment. The outlook for housing is becoming more guarded.

This article, Home Construction Remained Robust in March but Headwinds Are Gaining Strength, was originally published by the American Institute for Economic Research and appears here with permission. Please support their efforts.