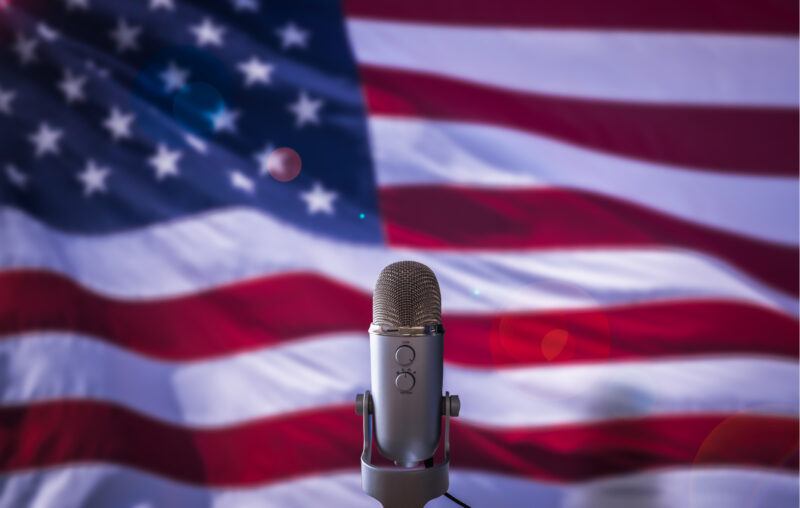 The title is a double entendre meant as both a synonym for the noun phrase “free speech” and as a normative claim regarding a declarative statement like “policymakers should free expression from unnecessary constraints.” Free Willy, of course, but also free expression!

President Biden was not quite right when he claimed that “no amendment to the Constitution is absolute.” The First Amendment simply recognizes Americans’ absolute natural right to express themselves freely without fear of government interference, be it direct or indirect through corporate regulation. People who understand the Constitution, the gist of Anglo-American jurisprudence, and John Stuart Mill’s On Liberty distinguish between the right to use a tool, be it words or firearms, and the uses to which that tool are put.

So, contra POTUS, one may, and indeed should, yell “fire” in a crowded theater if, indeed, the theater is aflame. Restrictions against yelling “fire” where no flame exists, though, aren’t about limiting freedom of expression per se, but rather are about the tort, the damages caused to others through the credible utterance of a false claim.

Similarly, outlawing fraud isn’t about banning certain speech, it is about criminalizing the damages that fraudsters inflict on their victims. And victims they are, due to what economists call asymmetric information. The theater goer and customer cannot readily know which claims of “fire” or fire “sale” are credible and which are not, so some state protection is merited. In other words, context is crucial.

Courts have generally upheld the notion that businesses can make broad claims about their business prowess — some companies even assert in their very names that they are the top company, whatever that means, in their field or region — but not make specific promises about the efficacy, particularly the long-term efficacy, of certain products. Consumers cannot cheaply assess the latter claims but they can the former by relying on brand reputations, guarantees, ratings, rebates, reviews, samples, word-of-mouth, and so forth when making purchasing decisions.

So, contra The New York Times, politicians have a First Amendment right to say what they want. Only the costs their claims create can be constrained constitutionally and those are generally minimal because nobody in their right mind takes political pronouncements at face value. In their role as voters, as in their role as consumers, Americans need no protection from general political claims so long as an open marketplace for information and ideas exists.

What Americans do need to be protected from are sitting politicians and bureaucrats with superior information about the causes and consequences of events and policies. That is why so many people, Left and Right, push for more transparency via freedom of information acts, body cams (why do we limit them to police anyway?), government data integrity laws, and the like, and why many also see a dire need for more personal accountability for policymakers and bureaucrats. So kudos to Eric Adams for promising to protect himself should he become New York City’s next mayor.

In short, each American must decide, independently, the merits of competing claims. Just as Americans must be allowed to decide whether to spend scarce dollars on products A through Z, lest “market” have no meaning, they must be allowed to decide, independently, whether to spend their scarce votes on D or I, L, or R, lest “democracy” lose its meaning.

If Americans can no longer discern high- from low-quality information because the educational system has failed to nurture their natural proclivities for independent thought, then the educational system must be improved, not freedom of expression limited. One of the most disturbing trends during my almost thirty-year higher ed career was the slow erosion of academic freedom and free expression in our universities, the very institutions that were supposed best to foster independent inquiry.

Freedom of expression has deteriorated to such a degree in U.S. higher education that leading academics Left and Right have recently formed the Academic Freedom Alliance (AFA) to push back on campus cancel culture and heavy-handed administrators with key books on the importance of free expression and op-eds and other forms of publicity. The membership of Great Barrington Declaration coauthor Jay Bhattacharya and other esteemed scientists makes one hopeful, as does the impressive list of top economists and political science and policy professors who have signed on. Most impressive of all are the working attorneys who have joined the movement. May quality lawsuits come as fast and furious as the movie franchise.

But with non-radical professors now virtually extinct in many fields, including History and Sociology, many of the few remaining ones having been driven out in recent years through nefarious practices recently exposed by the James G. Martin Center for Academic Renewal, the intellectual diversity required to imbue the habits of truly independent thought remains elusive. With university enrollments still plummeting, America may have to start over, if not from scratch then at least with a parallel system that embraces free expression rather than squelching it.

Many employment regulations strive to reduce harms that can be caused by asymmetric information and, especially, asymmetric power. Again, it is not the speech per se that is rightly restricted but the harms caused by speech that leads to coerced quid pro quo arrangements or breaches of fiduciary trust.

But rigid compliance with employment law can have a chilling effect on the open discussion of ideas necessary to advance understanding of complex social issues. How can one evaluate the relative merits of policy alternatives regarding, say, gender or religious discrimination if researchers fear for their jobs for even broaching the topic?

Obviously, researchers at policy institutions need an institutional and/or physical space, analogous to the college classroom or faculty lounge, where they can ask questions, bounce ideas off others, and share findings without fear of retribution. They need the equivalent of an intellectual salon where hypotheses can be broached and assessed by peers on their empirical and logical merits. To avoid its abuse, a modern workplace salon should be firewalled from regular HR restrictions by meeting in a special space at specific hours so it is clear to all involved that any views expressed are for discussion purposes, to advance the understanding of conversants. Like Vegas, what happens in a salon should stay in the salon if it is to aid an institution’s mission-crucial intellectual purposes.

AIER is developing a salon culture emphasizing freedom of expression, one of the key pillars of the institution thanks to the legacy of its founder, E.C. Harwood, the ideas of whom President Franklin D. Roosevelt tried to censor because they challenged the core tenets of the so-called New Deal. The most public expression of AIER’s commitment to empiricism, rationality, and free speech is its editorial policy, which can be found here. Like almost everything on AIER’s website, it can be freely copied or adapted by anyone at the low, low cost of a proper shout out.

AFA’s mission statement is an even more compelling defense of freedom of thought. It explains that AFA seeks to counteract pressures on employers to attack “employees whose views, statements, or teachings they may disapprove of or dislike.” While not endorsing specific content, it seeks to defend its “members’ right to state what they believe to be true and to be free from coercion or pressure to affirm or appear to affirm what is contrary to their beliefs.”

In sum, the U.S. Constitution expresses human rights, it doesn’t grant them. The rights, especially the cognate ones expressed in the first two amendments, provide equal access to important tools and are without limit. Government can punish those found after due process to have willfully abused tools like speech (or firearms) to the detriment of others but it cannot Constitutionally limit the availability of such crucial tools simply because some people might use them to cause harm. The best policies reduce asymmetries of information or power rather than exacerbate them and that usually means freeing expression, not excluding ideas or the people who espouse them.

This article, Free Expression, was originally published by the American Institute for Economic Research and appears here with permission. Please support their efforts.